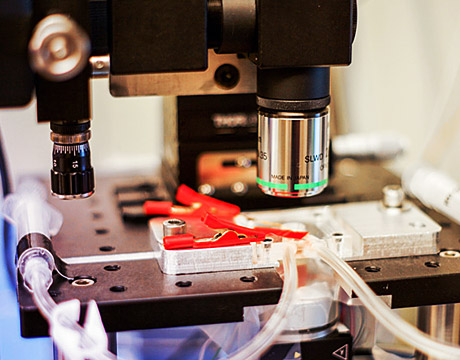 A new high-speed microscope produces images of chemical processes taking place at the nanoscale, at a rate that is close to real-time video. Image: Jose-Luis Olivares / MIT

Atomic force microscopes may have a big impact on the medical and semiconductor fields in the future but for that to happen, speed will likely have to be less of an issue. Kamal Yousef-Toumi, a professor of mechanical engineering at MIT, says his team has been making strides in this area.

“Basically, atomic force resolution systems, meaning resolutions down to the atomic level, have been worked on for maybe almost 25 years,” he explains. “We started with funding from Samsung and they do semiconductor manufacturing. Wafers needed to be looked at and inspected so the company wanted an instrument that could look at them in a very fast way because existing commercial instruments didn’t have the speed. That was one of the reasons for designing and making these microscopes, to have high-speed imaging.”

The result was his team’s atomic force microscope, which can scan images 2,000 times faster than existing commercial models.

The challenges involved were in many different areas, one being in the design of the system by itself. “Meaning, 'How do we put it together with special material, actuators, and sensors so it is like a whole system in the end,'” he says. “Optimizing the different parts doesn’t mean the overall system is working in an optimum way.”

The sheer volume of pixels and samples per image was also a major hurdle. “Because when we take images, it’s either 25 or 30 frames per second. If we want the video in the end images or videos to be very sharp and high resolution, then maybe we are taking every frame to have close to maybe a million lines per frame," he says. "And it keeps going. If doing a video frame, then it’s 30 million pixels per second. And then every line we image, we image twice to get the information. Now, that’s 60 million samples per second to transfer from instrument to computer.”

Other challenges involved control, for example, increasing the field of view. “We have multi-actuators. Some actuators are doing large scans but that’s not all of them. Now we combine different actuators and the control methodology we worked on allows for developing in a synchronized way.”

Looking at the behavior of the whole instrument, a mechanical design aspect they considered carefully was “mass distribution and dynamic decoupling.”

“Other things we focus on are counterbalancing, so where actuators or the microscope moves in the horizontal plane,” he says. “The control system can do just so much and a key thing is to design the instrument in a proper way from the beginning and then the control allows the instrument to have much better performance after that. Again, it’s also generating this dynamic decoupling and combining the slow actuators with the fast actuators and arranging them in a way to have this atomic resolution nanopositioning system that not only moves but gets you the information you want.”

Looking to the future, one of the team’s goals is to increase the speed to possibly 25 or 30 frames per second and to improve the ability of the system to deal with noninvasive aspects. But, most importantly, the ultimate goal is for the system to contribute to humanity.

“It’s exciting to think of all the things an atomic microscope can potentially affect,” he says. “In the medical field, if you look at cells or a virus then imagine if you could add to it an antibody and then could see it live, responding to that medication. Or you could change the environment around the cells, for example, and then see the response to it. Are you killing it or affecting it? It can even help in energy by looking at batteries in terms of research but also the developing of new batteries. It lets us look at a nano world in a completely new way.”

For Further Discussion
It’s exciting to think of all the things an atomic microscope can potentially affect. Prof. Kamal Yousef-Toumi, MIT