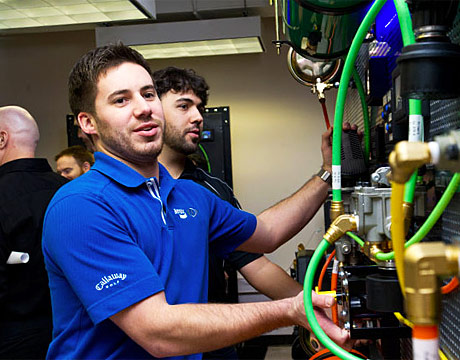 Staying at the Top of the Game

Rochester Institute of Technology’s Kate Gleason College of Engineering, known for its focus on cooperative education, has now embarked on what it calls a “reverse cooperative experience” offering practicing mechanical and electrical engineers an opportunity to earn a certificate in mechatronics engineering.

A key element of the program is the Knorr-Bremse North America Mechatronics Laboratory, a new facility at RIT that gives students hands-on experience at fully functional work stations covering key aspects of a mechatronics curriculum. The week-long lab component is the capstone of the 12-credit mechatronics program, otherwise held online, which typically takes about two years to complete. The program is modular and designed so that engineers complete the course work at their own pace while working full-time.

“A lot of people think about a co-op as where students study on campus and get work experience while they are undergraduates. We’re thinking of this as a reverse academic co-op to update and freshen the technical skills of practicing engineers,” says Edward Hensel, associate dean for research & graduate studies at RIT’s college of engineering. The lab, made possible by donations from Knorr-Bremse and its North American companies Bendix and New York Air Brake, also serves RIT’s undergraduate engineering students.

The program came about after executives from Bendix commercial vehicle systems, a lead manufacturer of air brake charging and control systems, expressed a need several years ago for continuing education for their current work force in mechatronics, especially for their mechanical engineers to become better trained in electrical skills and their electrical engineers in mechanical skills. RIT has had a long-standing relationship with Bendix, particularly through its cooperative education program.

Mechanical devices today are so dependent on computers and sensors that most require electrical engineering skills. Brake systems, for example, not only rely on air systems and physical braking systems but also on complex sensors and computers that kick in automatically when wheels start sliding on pavement or rails.

There are very few engineers with both mechanical and electrical degrees, says Jason Kolodziej, associate professor of mechanical engineering, who directs activities in the lab focusing on controls and system improvements.

His colleague, John Wellin, senior lecturer, who directs lab activities focusing on instrumentation, adds, “If you wanted people with knowledge in mechanics and electronics, you could just hire mechanical engineers and electrical engineers, but it is more beneficial to have that resident knowledge in each person rather than be compartmentalized.”

Bendix engineers made up most of the first class that received their certificates earlier this year. The second group, currently underway, is made up mostly of engineers from New York Air Brake, which develops train control products and systems.

The students start with two introductory courses, a course that is a review for mechanical engineers and new material for electrical engineers, and another that is new to MEs but review for EEs. Those courses also serve to build company work teams often composed of engineers based in different geographic locations who have never interacted before.

“In the first cohort, there were students at Bendix doing truck braking systems who began collaborating with students at New York Airbrake who were doing train braking systems,” Hensel says. “They were developing synergies through the program. We’re trying to create interdisciplinary design teams coming out of different groups of the company.”

The next three credits, an introduction to mechatronic systems, provide a look at real time simulation and embedded systems programming. Each student has an electromechanical kit to be used interactively at his or her own workstation. The final three credits take place at the lab on campus.

Students are encouraged to be collaborative and help each other, just as they would in the workplace, said Hensel. According to the lab’s website, engineers are expected to perform in cross-disciplinary teams with high levels of collaboration and to become strong contributors to multidisciplinary design teams.

While the lab was motivated by the certificate program, it can have a much broader impact on engineering education in general, Hensel says. “We see significant demand well beyond the two companies we are working with. Some of the corporate members of our industrial advisory board have expressed interest for their employees. So I certainly think it will grow.”

Kolodziej and Wellin agree that while the lab experiments were demonstrated on equipment mostly geared to braking, the knowledge gained can be applied generally and could be tailored to any specific discipline. For example, in experiments on vibrations, “That is a pretty common event in all machines moving through electrical systems in mechatronics, so that was more of a generic course in vibrations that gave students a perspective of what’s the effect on a real system,” Kolodziej says.

Hensel adds that equipment can be modified and experiments swapped out to be applicable to a particular industry, such as aerospace actuator-focused or manufacturing automation-focused. “The real focus is electromechanical systems and that touches almost everything,” he says.

For Further Discussion
We’re thinking of this as a reverse academic co-op to update and freshen the technical skills of practicing engineers.Edward Hensel, Rochester Institute of Technology