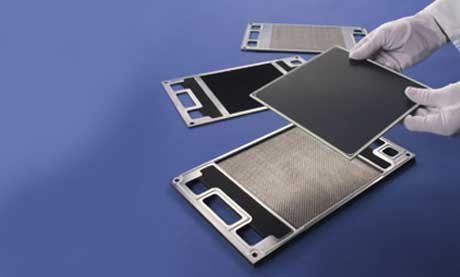 These flat metal and ceramic plates form the heart of a solid oxide fuel cell, a technology that promises to provide clean and efficient electricity.

Stationary Fuel Cells: The Next Generation of Electrical Power

by Mark Williams and Scott Samuelsen

Stationary fuel cells are now emerging as a true alternative to combustion heat engines for the production of electrical power and the co-generation of a thermal product.

This is happening at a time of great change in the thinking about the generation of power with new products at the point of use offering the promise of reliability, power quality, lower operating costs, remarkably higher system efficiency, and the production and utilization of direct current. These stationary fuel cells take advantage of heat that would otherwise be wasted and also run very quietly and emit virtually no pollutants.

Some of these that operate at relatively high temperatures—between 600°C and 1,000°C—hold promise for stationary industrial and residential power generation applications and for many military applications. With support from the U.S. Department of Energy, two such high-temperature technologies are moving from concept to commercialization: molten carbonate fuel cells and solid oxide fuel cells. Both operate at about 50% fuel-to-electrical efficiency.

These allow for fuel flexibility and, in addition, the high temperature provides high-quality cogeneration of a thermal product and an ultimate overall efficiency exceeding 80%. When integrated with a gas turbine, the waste heat can effectively be converted to electricity with the potential in the future of achieving fuel-to-electrical efficiencies exceeding 70%.

The technology for one type of high-temperature fuel cell, molten carbonate has been evolving over the past 30 years. A leading U.S. manufacturer, FuelCell Energy, pioneered a direct fuel cell 250-kW product developed in partnership with the U.S. Department of Energy. FuelCell Energy delivered its first commercial unit in 2003, and units are now operating at more than 50 facilities worldwide. In the first few years, the cost of the FuelCell unit declined from approximately $8,000/kW in 2004 to $4,800/kW in 2006.

Solid oxide fuel cells (SOFC) also operate at high temperatures, from 700°C to 1,000°C, depending on the design and application. There is ongoing research worldwide to establish operating conditions and material sets that could enable both ease of manufacturing and relatively low-cost mass production. For example, SOFCs with high power densities operating at lower temperatures—700°C instead of 1,000°C —have been developed and operated. The lower operating temperature may enable lower costs.

A solid oxide fuel cell system has been commercialized as of this writing, but there are a number of companies working to establish systems, including Acumentrics, General Electric, IonAmerica, Rolls-Royce, and Siemens Power Corp.

These efforts will likely be worthwhile given the escalating costs of fossil fuel. Because of the huge potential, some states have taken aggressive steps to be the manufacturing and employment base for fuel cell technology. California has established the Stationary Fuel Cell Collaborative, with a core group composed of state, federal, and non-government agencies to encourage a coordinated strategy. Industry is engaged through an advisory panel. Several years ago, the state of Ohio committed $103 million to establish a manufacturing and employment base for fuel cell technology.

All of this activity affirms the strong interest in high-temperature fuel cells as the next generation of electricity and thermal product. Many believe high-temperature fuel cell technology will become an integral strategy for central power production of electricity and transportation fuels and a hybrid configuration is expected to provide hoteling or propulsive power for ships, locomotives, long-distance trucks, and civil aircraft. In all their potential applications—residential, commercial, industrial, or institutional, in distributed generation or in central power plants—high-temperature fuel cells indeed portend a profound change in the manner by which power will be generated in the decades to come.

[Adapted from “Beginning the Transformation,” by Mark Williams and Scott Samuelsen for Mechanical Engineering, May 2006.]