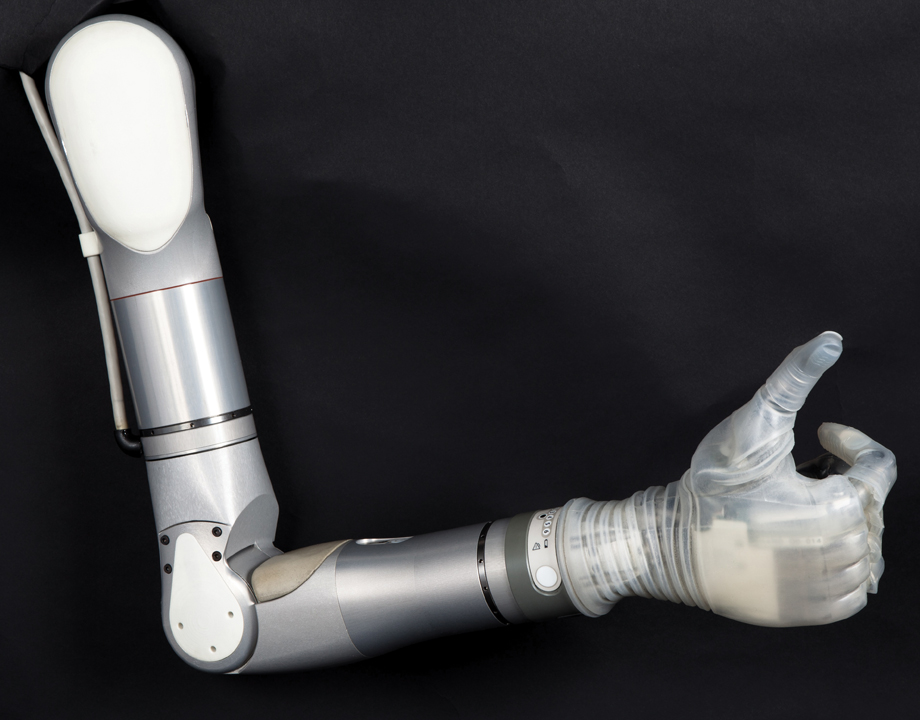 Engineers have created a prosthetic arm that feels like the real hand and named it after Luke Skywalker’s robotic arm. Photo: University of Utah College of Engineering

Building Equipment Contractors Chemical and Pharmaceutical Manufacturing Medical Equipment and Device Manufacturing Robotics
Significant technological accomplishments have been achieved in prosthetics in recent years. For example, sensors placed on the skin can detect neural signals that trigger motion in prosthetic devices. Although this is significant, the resultant motions are basic and do not provide tactile sensations, so vision is required for tasks such as picking up an object.

One of the most impressive prosthetics is the LUKE Arm. Named after the robotic hand that was fitted to character Luke Skywalker in The Empire Strikes Back, this prosthetic device is manufactured by Mobius Bionics. The arm consists of metal motors and connectors with a clear silicon “skin” that covers the hand, which is pre-programmed to perform a variety of grip patterns. The entire device is powered by an external battery and wired to a computer for processing signals.


“For all its merits, the LUKE Arm contains only 19 sensors and generates six different types of movements,” said Gregory Clark, associate professor of biomedical engineering at the University of Utah. “Similarly, its neural interface can capture or convey hundreds of different electrical signals to or from the brain. Although this is a lot, these numbers are impoverished compared with the thousands of motor and sensory channels of the human body, or its natural functional capabilities.” 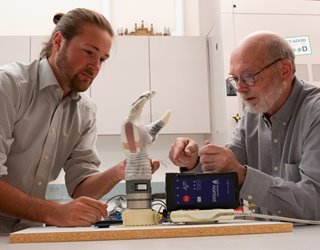 Greg Clark (right) and Jake George (left) with the LUKE arm. Photo credit: Dan Hixson/University of Utah College of Engineering.
To create more realistic function in the arm, Clark used a University of Utah invention called the Utah Slanted Electrode Array, a bundle of 100 microelectrodes and wires that are implanted into the amputee’s nerves in the forearm and connected to a computer outside the body. When the subject thinks about picking up an object, the implanted electrodes detect that signal and the computer translates them into digital signals that direct the arm to move—restoring the ability to “feel” the object.

Subjects were capable of distinguishing between large and small or soft and hard objects within a few seconds of handling them with their prosthetic hands.

You May Also Like: A Prosthetic Arm Bangs the Drums

A similar project in Europe involves a patient who received titanium implants in two forearm bones, from which electrodes to nerves and muscle were extended to extract signals to control a robotic hand and provide tactile sensations. “Researchers can electrically stimulate these nerves in a similar manner as information conveyed by the biological hand,” stated DeTOP, a European research group. “This results in the patient perceiving sensations originating in the new prosthetic hand, as it is equipped with sensors that drive the stimulation of the nerve to deliver such sensations.”


Artificial sensory skins are becoming increasingly sensitive. For example, the Massachusetts Institute of Technology has developed a sensor-packed glove that, with the help of artificial intelligence, can recognize objects through touch alone. The simple knit glove contains about 550 tiny sensors that gather pressure-signal data when objects are held, successfully identifying objects (and their weight) upon touch about 75 percent of the time.

At the National University of Singapore (NUS), researchers have created a highly sensitive artificial skin called “Asynchronous Coded Electronic Skin” (ACES), that can detect touches more than 1,000 times faster than the human sensory nervous system. For example, it can differentiate physical contacts between different sensors in less than 60 nanoseconds—the fastest ever achieved for an electronic skin technology.

Editor's Pick: These Aren’t the Droids You’re Looking For

“Scalability is also a critical consideration as big pieces of high-performing electronic skins are required to cover the relatively large surface areas of robots and prosthetic devices,” said Benjamin Tee, assistant professor of materials science and engineering at NUS and leader of the research team.

“ACES can be easily paired with any kind of sensor skin layers—for example, those designed to sense temperatures and humidity—to create high performance ACES-enabled electronic skin with an exceptional sense of touch that can be used for a wide range of applications, including prosthetic devices.”

Mark Crawford is a technology writer based in Coralles, N.M.