Solar Storage When the Sun Goes Down

Solar Storage When the Sun Goes Down 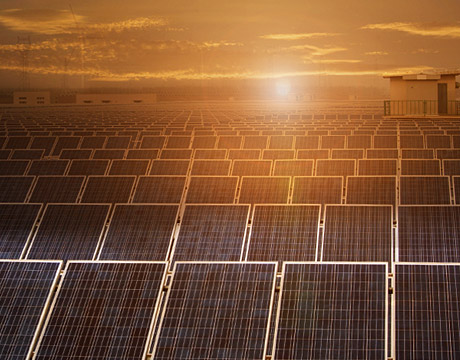 That star at the center of our solar system, in addition to being the source of all life on the planet, may also be our best hope for clean, safe, and abundant energy. If we could just get the technology right it could power all our needs for the next five billion years or so. The only problem is that pesky shadow it casts on half the planet, called night; that and the clouds that dull its shine.

In short, the sun’s intermittency is holding us back. Systems using photovoltaic cells with lithium ion batteries or photosynthesis with hydrogen are inefficient and imperfect, unable to provide the uninterrupted power that modern life demands.

Now researchers at the University of Texas at Arlington may have solved that problem, at least at a small scale. Their solution essentially combines a redox flow battery, which uses a liquid electrolyte, and a solar cell. “Under light, the electrons will be stored inside the material, like in a rechargeable battery,” says Fuqiang Liu, a professor in the department of materials science and engineering at the university. “Then, when you switch to dark, those electrons will be released spontaneously.” This instant and efficient “electron storage reversibility” is the key to a seamless solar powered future.

A lithium ion battery with photovoltaic cells is a closed system with a capacity determined by the battery’s volume. But Liu’s new system is open. That is, the chemical agent, vanadium redox, is stored in an external tank, which can be as large you like. Its greater charge and discharge efficiency (or “round trip efficiency,” as Liu’s paper calls it) is owed to the vanadium redox electrolyte, which reacts quickly to electrons on the surface of the cell’s semiconductor. The faradaic efficiency of the system is 95 percent.

Liu’s system is likely to beat photovoltaic cells in the budget sphere as well. Vanadium is cheap compared to the noble metals needed for today’s solar cells.

The only downside of the cell is that it’s not very portable. “Because this is a complicated system—it involves flow and a liquid electrolyte, a storage tank, pump, and control systems—it’s primarily suitable for stationary applications,” says Liu. So you won’t be seeing any “Reversible Electron Storage in an All-Vanadium Photoelectrochemical Storage Cell” powered automobiles hurtling down the highway, saving the world with their zero emissions, anytime soon.

But even stationary applications are a ways off. Liu’s proof of concept cell is about one inch by one inch in size. The storage tank holds less than a hundred milliliters. “If you use a large tank the storage can be huge, but to charge the entire electrolyte you need 1,000 hours or so,” he says. But Liu sees no hurdles to scaling up. Redox batteries have already been shown to be effective for massive storage systems—a megawatt system currently helps power Washington State University.

“We still need extensive research to really understand the system and make sure that it will work when we eventually scale up,” says Liu. Assuming it does, it won’t be just the adventurous, green minded folk among us that chose to power a house, a building, or even a town with solar. It’ll just make good, economic sense.

For Further Discussion
Under light, the electrons will be stored inside the material, like in a rechargeable battery. Then when you switch to dark, those electrons will be released spontaneously.Prof. Fuqiang Liu, University of Texas at Arlington