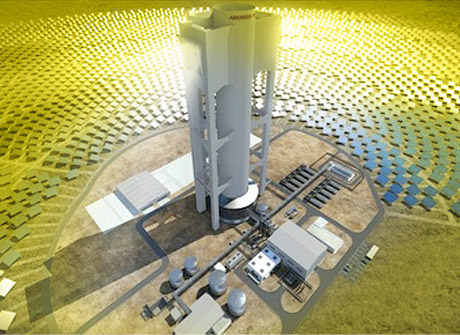 Solar Steam Power on the Rise

Relatively small swaths of desert land could power the country's every electric need. Larger swaths could power the world. To do so would not have to mean paving a barren landscape with photovoltaic cells. Instead, we could focus a patch of our nearest star's generous rays to a single point and, likethe old image ofa childburning ants with a magnifying glass on a clear summer's day, create heat.

That's the plan that South Africa's Cockerill Maintenance & Ingénierie—CMI to us—has for a power plant in Upington. The company has been in the boiler business since 1818. Now, working with the Spanish company Abengoa Solar, they will build their first thermal-solar boiler to convert sunshine to electricity.

The concept is simple enough. In a flat part of the country, thousands of mirrors will sit in an arc at the foot of a tower, like so many alien minions before their monolithic leader. As the day wears on and the sun makes its journey from horizon to horizon, the heliostats will obediently track its path carefully reflecting, for the duration of the day, the starshine that hits them to the top of the tower.

Focusing a day's rays to one spot is one half of the battle (won by Abengoa). The other half is turning that heat into useable power. Enter CMI's 2009 patent. This receptor produces high-pressure superheated steam (a good 986 degrees Fahrenheit), which can be used directly in a turbine for making juice.

At the top of the tower is where it all happens. The condensed light hitting the receptor is so bright that the tower seems to be producing light rather than receiving it. Two cavities on the east and west sides of the 655-foot tower work as evaporators. A third heats the steam, which travels to the turbine at the ground. "Direct steam generation means no use of dangerous and polluting thermal oils, no losses in heat exchangers," says Michel Lalmand, vice president of sales for CMI Solar.

One of the biggest problems with solar power is the question of storage. Rest assured, the folks in Upington will not have to forgo light, television, microwaves, etc. after the sun sets. "Part of the saturated steam may be stored for overnight electricity production, after conditioning in a separated superheater," explains Lalmand. As night progresses, the loss of energy is "very small, depending upon the heat insulation of the accumulator."

Creating and storing power was the easy part. Far trickier was finding a way to deal with the stresses created by "radiation fluxes" and the extreme temperature difference between the faces of the tower. The solution, however, is proprietary. The company is also developing a paint that will allow the sun's rays to pass through it while excluding destructive infrared rays.

By 2013 the plant, called Khi Solar One, will produce its first megawatts. It will eventually provide the power for 27,000 households. And one hopes that their clean, uninterrupted electricity will inspire the rest of the world to put their most desolate lands to better use.