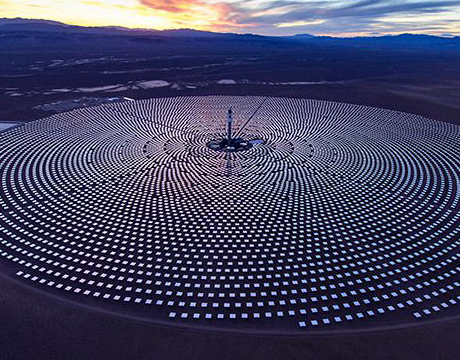 Solar Power Round the Clock

Solar panels now cover rooftops throughout the developed world, and costs continue to fall. But the solar photovoltaic technology used in these panels comes with a major drawback: It produces electricity only when the sun shines.

Concentrated solar power (CSP), a technology also known as solar thermal power, stores solar energy as heat before converting it to electricity. CSP could generate the steady supply of electricity the grid needs, but it has advanced at a snail’s pace because it was too expensive compared with solar photovoltaic panels, whose prices have declined rapidly.

But a new solar plant with molten salt storage has been built that stays hot through a summer night. And that could make solar power an option around the clock.

SolarReserve’s 110-MW Crescent Dunes Solar Energy Plant in Tonopah, NV, achieves this by using 10,347 different heliostats—motorized mirrors that track the sun and keep it reflected precisely onto a receiver—that are perched atop a 540-foot tower.

The system uses a unique combination of high nickel alloy materials (originally developed by Rocketdyne) to help it store a great deal of heat with a relatively small amount of fluid. Reducing salt volume cuts the cost. It also helps the plant stand up to extreme thermal cycling stress from a desert environment that can move from chilly to broiling in half a day.

After it’s heated, the hot fluid then moves through a heat transfer loop to drive a conventional steam turbine. Then the “cold” discharge fluid, which is still 550 °F, is pumped from the turbine loop into tanks. Heat from that fluid can continue to produce power for 10 hours after the sun has set, allowing the plant to meet the electricity demand around the clock, at least in the summer, when nights are short.

“On a large scale, CSP with storage can significantly improve the ability of a 100 percent wind, water, solar system to match power demand at a much lower cost than batteries,” said Mark Z. Jacobson, who directs the Atmosphere/Energy Program at Stanford University.

And CSP might work even better when it’s combined with PV, said Kevin Smith, SolarReserve’s CEO. At some of the company’s utility solar projects in South Africa and Chile, they now integrate both technologies, providing power from low-cost PV during the day, when demand peaks, and from CSP at night.

The utility NV Energy is already providing power from the Crescent Dunes plant to 75,000 homes, and in early May, SolarReserve signed an agreement with Shenhua Group Corporation, Ltd., to build 1,000 megawatts of solar thermal projects in China.

R.P. Siegel is a technology writer based in Rochester, NY.

For Further Discussion
On a large scale, CSP with storage can significantly improve the ability of a 100 percent wind, water, solar system to match power demand at a much lower cost than batteries.Prof. Mark Z. Jacobson, Stanford University