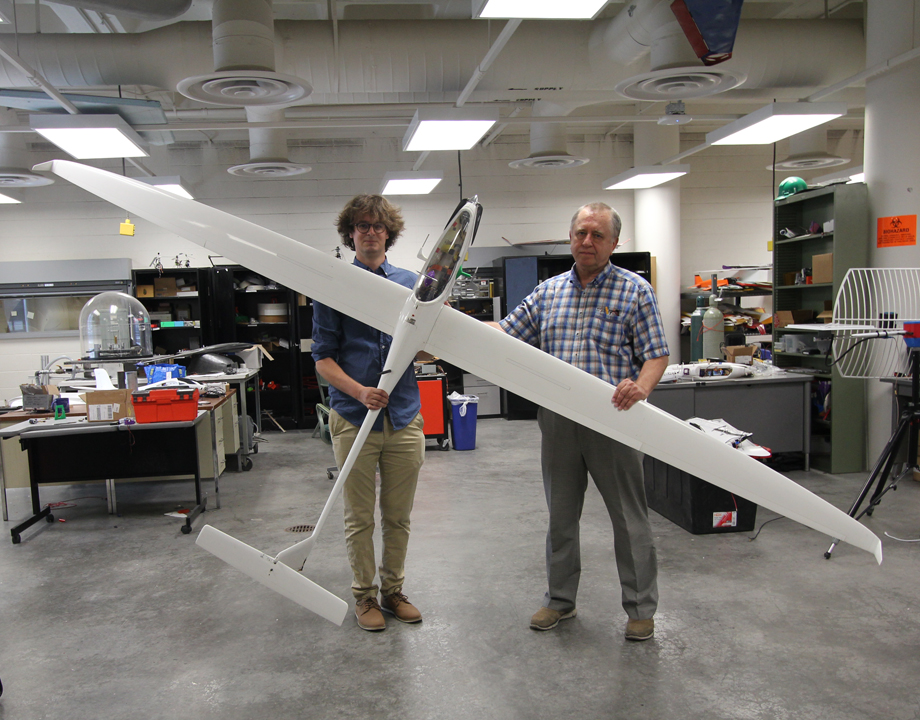 Autonomous Technology Collection
Rovers and oribital missions have done wonders to improve our understanding of the surface of Mars, but it’s time for scientists to try something new.

“We don't yet have detailed knowledge of all the really interesting places, the rugged environments, the highlands, the crater regions, and the polar regions,” said Jekan Thanga, an associate professor of aerospace and mechanical engineering at the University of Arizona. “All of these places are somewhat limited with current methods, particularly in the search for life, and of course, water.”

Thanga is working alongside UA Professor Sergey Shkarayev, and students Adrien Bouskela, Tristan Schuler, Himangshu Kalita, as well as partnering with Alexandre Kling, a research scientist in NASA's Mars Climate Modeling Center, to design a sailplane that will use the power of Martian winds to glide above some of the more treacherous landscapes of the red planet. 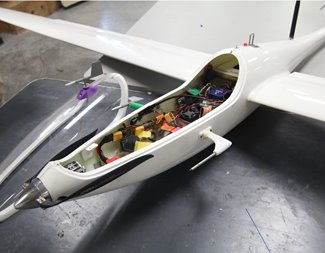 Engineers use sailplane on Earth for preliminary Mars investigations. Photo: Emily Dieckman
“It's a bit of a high-risk, high-reward situation,” said Bouskela, who is the lead experimenter of this design. “It's risky, not in the financial sense, but in the engineering sense because the wind conditions have to be good for it to be successful. We haven't had these kinds of vehicles to teach us about the wind on Mars. So there's a risk there, but the reward can be huge because if the wind is sufficient, the plane can stay in the air and collect valuable data.”

Knowing that propulsion would be the biggest challenge because of Mars’ thin atmosphere, the team decided to move forward with the glider design. The glider is very lightweight at about 11 pounds with a wingspan of about 11 feet. An array of sensors aboard the craft will be used to measure temperature and pressure as well as the presence of gases like methane. It will also be equipped with cameras so that scientists can get a better view of terrestrial features.

The idea is for the sailplane to stay in the air perpetually, or for at least days at a time. To achieve this, the team was inspired by the flight patterns of the albatross, a bird that is able to fly up to 10,000 miles in a single journey using dynamic soaring.

Take Our Quiz: What Do You Know about the NASA Ames Wind Tunnel?

Dynamic soaring is a flying technique that involves moving between different air masses, catching a tailwind, and looping back 180 degrees to gain speed before entering back into the cycle. Many pilots use the technique to gain speeds well over 500 miles per hour.

“The design utilizes the unsteadiness in the atmosphere,” Shkarayev said. “It exploits and harvests the energy in the wind.”

As for the deployment of the sailplane, the team is considering two designs. The first is a roll-up inflatable wing design, which would contain a modular rib spar and a pair of extendable carbon-fiber Astro-tube booms, which would extend to provide support to the wing.

The second deployment method would utilize an accordion design, using a torsional spring to unfold and lock into place. This method has some promising advantages over the roll-up design because it can achieve a rigidized shape faster.

“These inflatable wing concepts, as far as we know, goes back to Goodyear in the 1950s when they were creating all of these out-there designs, specifically for soldiers,” Thanga said. “They had this backpack design that was equipped with an inflatable aircraft that could unfurl its wings and fly the soldier back home. The concept worked out. It was actually very feasible and practical, but the perception of an inflatable aircraft is still a little hard to get over, especially for human carry, which is why we don’t see those designs today.”

Listen to Our Podcast: Aerospace and Automotive Leverage On-Demand Manufacturing

In either deployment case, the glider would be packaged inside of a CubeSat, a small satellite, which would use a gas generation system to pressurize the wings within seconds and directly release it into the atmosphere. Alternatively, they are also exploring the possibility of the CubeSat first releasing a balloon or blimp, which would carry the sailplane deployment package at a safer, more leisurely pace. Instead of seconds, this method would take hours, and once the sailplane has successfully deployed, it could be commanded to launch at an optimal time. Furthermore, the blimp or balloon could act as a dock, frm which the glider could repeatedly launch.

Once the glider has completed it’s mission, it would then go on to have a second life. Adrian said it could land in a hard-to-reach place for a rover and act as a weather station, collecting even more valuable data.

Currently, the team has deployed the plane at low altitudes on Earth with success. They are working to perfect the design for higher altitude experiments and are eager to see how it performs.

“I believe that we will learn a lot from the high altitude flights,” said Shkarayev. “We will keep working on both improving our mathematical models and the software on board the aircraft.”

NASA has not yet committed to the idea, but the team hopes it will incorporate the sailplane into a future Mars mission. The design is lightweight and inexpensive, which make it an attractive option for exploring unknown landscapes.

“There is deep interest in being able to predict the Martian weather system and atmosphere,” Thanga said. “Data collected using this technology could inform those forecasts and make future landings on Mars more accessible.”