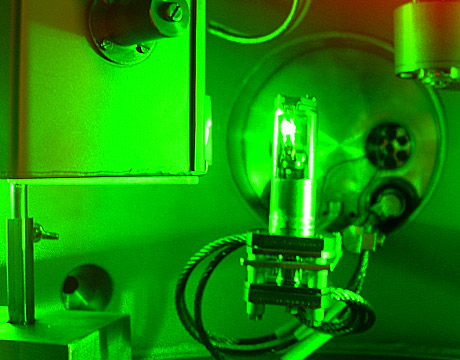 The key to a future of safe, cheap, clean energy is simple: go with nuclear, but remove the risk. That, of course, would mean cutting out radiation. If we could render our Geiger counters archaic and shrink the scale of our reactors and use an easier-to-come-by source of fuel, then we’d have something truly utopian.

Such a future may be within our grasp, thanks to the work of Leif Holmlid, a professor of atmospheric science in the Department of Chemistry at the University of Gothenburg. Forten years now, he has been researching ultra-dense deuterium. This potential fuel source is made from heavy hydrogen, which happens to be found in that plentiful stuff of our planet called water. After a while, Holmlid realized that the distance between the atoms of the ultra-dense stuff was rather close. “So it was quite possible to easily start fusion in this material,” he says. Holmlid then set about doing just that, first in the theoretical world, then in the real.

The result is a laser-fired fusion reactor that has already managed to produce more energy than it takes to run. In short, the technique involves putting deuterium in a high-pressure chamber so the ultra-dense material forms on the surface. When zapped with a laser for a few nanoseconds, the fusion process begins. The trick is timing the pulses of the laser with the production of deuterium, currently about ten times a second. “That’s the main thing in the reactor. You don’t have to do much more,” says Holmlid.

First attempts revealed that the particles coming out of the reactor were “too fast to be coming from ordinary fusion.” Further investigation revealed that the particles were not the typical neutrons, but muons. Muons decay much faster than neutrons, in 2.2 microseconds compared to a neutron’s 1,000-second-long decay. That means they can easily be absorbed by a simple wall. “There is a risk with muons,” says Holmid, “You can’t just neglect them. But the enclosure is much smaller than if you have neutrons.”

Another great advantage to the emission of muons is that, unlike neutrons, they’re charged, so they can be used to directly produce electricity. Just how, though, has not yet been determined. “That is what we are going to investigate next,” says Holmid. The reactor will likely use a “so-called inverted cyclotron,” a small magnetic device that makes a charge a circle. And harvesting the heat the reactor produces will be a mere technical matter.

With the threat of radiation reduced to nearly nothing, Holmlid’s reactors needn’t take up massive swaths of any municipality. They could be built small enough to power neighborhoods or even single homes. “It doesn’t seem that it will be small enough that you can have it in a car or a robot or something like that,” he says. “But in a house, yes.”

The ultra-dense deuterium reactor isn’t the only one in development using heavy hydrogen. But those add tritium, which is not safe to handle at a large scale, says Holmid. “It is usually believed you can measure and take care of radioactivity, but that’s the not the case with tritium,” he says. “You can have lots of tritium around but you cannot measure it with any instrument, in the lab, or anywhere.”

Ultra-dense deuterium is some 100,000 times denser than water and thought to be denser than the stuff at the sun’s core. With luck, and a good deal more work, it too may bring us free safe light and warmth.

For Further Discussion
There is a risk with muons—you can’t just neglect them. But the enclosure is much smaller than if you have neutrons.Prof. Leif Holmlid, University of Gothenburg