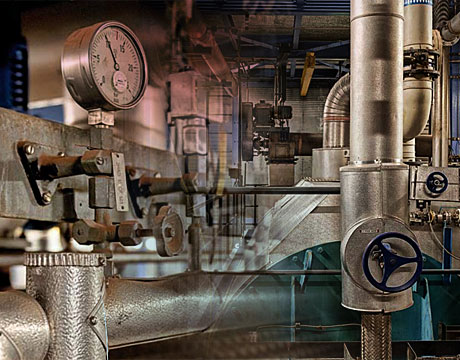 Sewage sludge is on the rise in Europe. Wastewater’s solid waste has to go somewhere and one of the easiest ways of dealing with the stuff is to incinerate it. But turning sludge to ash means adding an additional energy cost to the long chain of waste management needs.

The largest sewage sludge incinerator in Europe is operated by Slibverwerking Noord-Brabant (SNB) in The Netherlands. The firm has transformed its plant into an energy-neutral one. To do so it turned to heat recovery steam generator specialists, NEM (which was acquired by Siemens in 2011).

The incinerator was first built in 1997 and used low-pressure saturated steam to dry the sludge. At that time, the facility had an auxiliary boiler on hand to use in case of a steam shortage. “But that boiler has never been used, because the heat from the sludge was higher than anticipated, so in fact they had an excess of steam,” says Erwin Aalbers, NEM project manager.

In 2012, SNB decided to try to put all that extra steam to use. According to their calculations, it was possible to reduce energy consumption to near zero if properly outfitted. “Until that time, even though they were producing a small amount of power, they were a power consumer, they still needed electricity from the grid,” says Aalbers.

To win the bid for the job, NEM proposed turning two of the facility’s four lines of low-pressure steam to high-pressure lines. Such a switch to high pressure can seem like a sudden addition of risk to some, according to Aalbers. “These plants may think it’s too complicated, might be a little bit afraid. They were used to 10 bars steam, all of a sudden they have 60,” he says. “But it’s still steam, its not rocket science.”

An additional challenge was that the new boilers and turbines had to fit into the existing structure. “It meant we had to look a bit further, outside our comfort level, and reduce the tube diameter to outside the regular range,” says Aalbers. They also promised that they could finish the job in a mere 83 days and keep the plant burning sludge all the while. To do that (after winning the bid), they built a header that could connect to different branches and would ultimately be left in the facility unused. “So in effect we started with a lot of additional equipment which is useless at this moment,” says Aalbers. “It was required for us to be flexible.”

NEM managed to complete the job early, and the new system powers itself, making it truly energy-neutral.

Business for incinerators is likely to be booming in the coming years. Until recently, Germany has used about 30 percent of its sewage sludge as fertilizer. But now, because of the amount of heavy metals and other pollutants found in the material, the sludge can’t legally be slathered on dirt. While a small portion of that could be shipped to SNB, Germany is planning on building its own incinerators that will produce a pure, uncontaminated ash. Nine percent of all sludge becomes ash, and about twenty percent of that is phosphorus, vital raw material. To learn how to best separate it from sludge, the Germans came to SNB.

“The only way to incinerate and recover phosphorus is by our technology, mono-incineration,” says Marcel Lefferts, SNB’s director. The “mono” of mono-incineration means the facility is used to incinerate nothing but sludge. “They took a tour of the plant as a showcase of good practice of sludge treatment, looking for advice from our side.”

Currently only two of SNB’s lines use high-pressure steam. Tax laws in the Netherlands currently make energy production fiscally tricky, but they may be changing soon. If so, the plant could convert their two low-pressure lines to high-pressure and produce about 3.5 megawatts. Already they are planning to install a new generator set that will make them a net producer of energy.

That may not make sludge the green energy source of choice for powering the entire planet, but, “For SNB, it would be very helpful for reducing the cost for sludge incineration,” says Aalbers.

For Further Discussion
Even though they were producing a small amount of power, they were a power consumer, they still needed electricity from the grid. Erwin Aalbers, NEM project manager