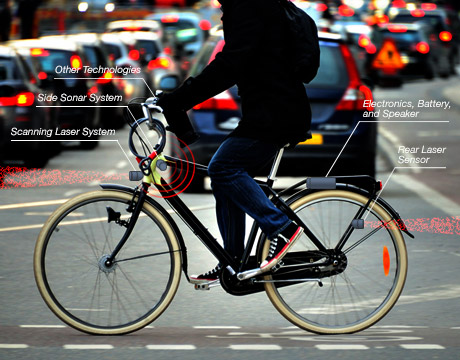 Researchers are developing a sensor system for a bicycle that can predict imminent bicycle–motorist collisions.

Look out on numerous roads and you’ll see them trying to find a way into a crowded lane, picking their way through traffic. Bicyclists are seemingly everywhere. Helmet strapped and riding a two-wheeled vehicle that can sometimes be more expensive than the cars that pass them, they go it alone or sometimes ride in packs.

As cycling becomes a more and more popular mode of green transportation in cities such from Portland to San Francisco, it’s safe to say that comparatively vulnerable cyclists can use all the help they can get as they seek to share the roads with SUVs and 18-wheelers. A team currently working at the University of Minnesota hopes to create a much-needed warning system to protect bicycles from motor vehicles, providing a respectful and safe transportation environment.

Rajesh Ramani, a professor of mechanical engineering at the school, says just as some cars have collision-prevention systems, there isn’t a reason why there can’t be a corresponding one for bikes.

“If this could be a system which could track nearby cars on the road, for people who need bikes for everything from exercise to getting to work, then it could be an important success,” he says of the project, which received funding from the National Science Foundation. “Yes, there’s a system for cars for automatic warning and braking. Bicycles don’t need to tell, really, if they will run into a car. But it’s different when you talk about the danger of being hit from the rear or from the side while going through a traffic intersection. That’s the mindset you have to take going into creating something like this. It’s a different need than for cars. It’s different collision scenarios.”

The system has been worked on for over two years now and it revolves around developing a reliable sensor system for the bicycle. The system mixes in algorithms as well, along with a microprocessor providing an alert.

During their work, cost became a major factor.

“For the rear collision system, for example, we had to balance cost versus having sufficient range,” he says. “A sonar sensor for the rear worked out financially because it’s less than twenty dollars but its physical range is only on the order of six meters or so. We need at least twenty meters. Radar sensors give much longer range but are much more expensive. We ended up going with a laser sensor that’s mounted on a stepper motor—the sensor itself costs eighty nine dollars at retail.”

With the sensor, he explains, it allowed them to monitor vehicles that are behind the bicycle. They could also do active sensing. “That means doing active locational control of the laser sensor,” he offers. “As the car behind the bicycle moves laterally or longitudinally, the sensor stays focused on it.”

The system also has a special type of sonar system, a triad unit: one transmitter and two receivers. “We’re using this is to be able to find both the distance and orientation of the car at the side of the bicycle,” he says.

The warning system is being further developed to start with visual signals from the bicycle and also to provide loud audio. “The audio is just like when you can hear a car honk from another car when you’re driving but this would have a different sound so a driver would know it’s specifically a bicycle.

Despite their strides, there are still challenges left when it comes to reliably tracking the vehicles at this point, he admits. “I think we’re doing well for rear and side and working on the front,” he says. “The goal is to keep the price at five hundred dollars or less and keep it lightweight and low power. I like where we’re headed.”

For Further Discussion
That’s the mindset you have to take going into creating something like this. It’s a different need than for cars. It’s different collision scenarios.” Prof. Rajesh Ramani, University of Minnesota