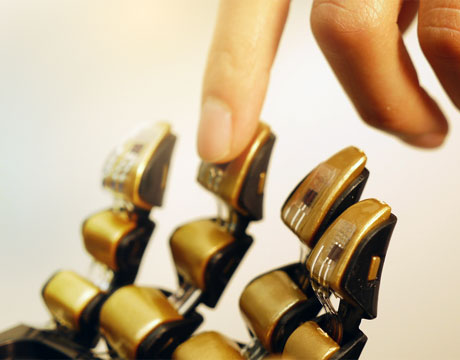 A new sensor placed on an artificial hand allows a user to feel pressure and touch. Image: Stanford University

Advances in the development and sophistication of prosthetic limbs are numerous. Researchers continue, however, to work on sensory needs: How to make an artificial limb feel objects and allow a user to react to touch. Now, a team of Stanford University researchers is moving closer to that goal, developing artificial skin made of very thin plastic layers that detects pressure through a newly developed sensor, which then delivers an electric signal to neurons.

“We want to communicate information or stimulus in a way the brain can understand,” says Alex Chortos, a doctoral candidate in materials science and engineering who is part of a team led by Zhenan Bao, a Stanford professor of chemical engineering. “This is the first time a flexible, skin-like material has been able to detect pressure and also transmit a signal to a component of the nervous system,” said Bao in a statement.

The work involves three components: the sensor, a flexible circuit to transmit electronic signals and a neurological recognition of the signal. Chartos says the team has been working on the sensor since about 2008, and more recently to link the sensor to the brain.

The sensor is comprised of two thin rubber-based plastic layers. The top layer creates a sensing mechanism based on earlier work by Bao’s team that showed how to use the "spring" of the molecular structures of plastics and rubber, the components of the sensor. The sensitivity was increased by fabricating the plastic with a waffle pattern, which compresses the plastic’s molecular springs even further. The team then added billions of carbon nanofibers throughout the plastic. This increases pressure sensitivity even more as the nanofibers are pushed closer together during touch, enabling them to conduct electricity.

“The response is very complicated,” says Chartos. Human skin transmits pressure information in short electrical pulses, similar to Morse Code. By increasing pressure on the waffled plastic “skin,” the nanotubes are pushed even closer together. Electric pulses ebb and flow to the sensor as pressure changes.

Moving the electric pulses to nerve cells is the next step. To accomplish that, the team worked with colleagues from PARC, a Xerox Company, using the firm’s inkjet technology to print flexible circuits onto plastic. For sensitive artificial skin to become practical, a large number of sensors must be able to be deposited over a large surface, says Chartos. This work demonstrated its practicality.

But the electronic signal still must be recognized by the brain through a biological neuron to complete the chain. Researchers worked with Stanford bioengineering professor Karl Deisseroth’s lab to leverage Deisseroth’s work in optogenetics, which combines optics and genetics. Cells are bioengineered to make them sensitive to light frequencies. Light pulses can then be used to switch cellular processes on and off.

The team engineered neurons to represent the human nervous system and translated electronic impulses from the artificial skin into light pulses. Those pulses then activated the neurons, closing the loop and showing the artificial skin can mimic the working of human skin. The work is detailed in a paper published in Science.

“There’s a long way to go to get to full functionality of [real] skin, cautions Chartos, noting there are several sensing mechanisms in the human hand, including temperature and texture. “We’ve demonstrated that a single pressure receptor acts in a certain way. But to be able to fully mimic skin we have to implement a number of different sensors.”

The team feels its approach lends itself to adding sensors for other sensations as they may be developed, supported by inkjet fabrication to lay down a network of sensors over a plastic layer that would cover a prosthetic hand, or arm. However, the density of receptors in real skin is very high. Right now, researchers could only put down 10 to 20, believes Chartos. “We’ve really not worked on that yet. We’ve fabricated an individual design to test a sensor’s capability to process neural signaling.”

There also are other stumbling blocks. “There are other limiting factors for a real prosthetic hand,” notes Chartos. “For instance, on the biological side, there are a number of peripheral nerves you have to make contact with.”

Other methods of stimulating nerves may also be used in future prosthetics. The Stanford team has worked with other Stanford professors on direct simulation of neurons with electrical pulses. Last year, a team at Case Western Reserve University, Cleveland OH, developed a system for attaching a prosthetic hand into surgically implanted electrodes in a patient’s forearm to allow a user to feel what the devices fingers were doing.

Learn about the latest trends in medical diagnostics at ASME’s Global Congress onNanoEngineering for Medicine and Biology.

For Further Discussion
We’ve demonstrated that a single pressure receptor acts in a certain way. But to be able to fully mimic skin we have to implement a number of different sensors.Alex Chartos, Stanford University