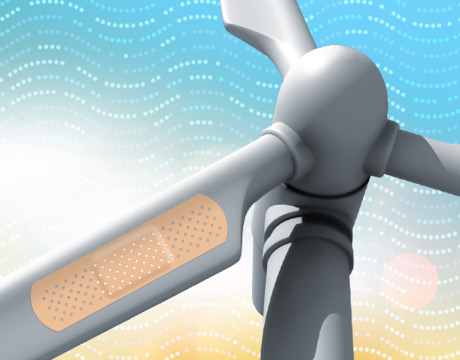 Extreme weather, lightning strikes, manufacturing defects, delamination: those are just some of the factors that cause about 3,800 wind turbine blades to fail worldwide each year. That number represents just one in 200 of the roughly 700,000 blades in operation, but a single failure can cost up to $1 million in repairs, especially if the turbine sits miles offshore.

Mechanical engineers from the University of Wisconsin-Milwaukee hope to put a dent in that number with a new self-healing blade system that mimics the human circulatory system.

The self-healing system, developed by UWM mechanical engineering professor Ryoichi Amano and his colleagues, has passed proof-of-concept tests, but still needs improvements before it can hit the market.

The team reported the results online in March in ASME’s Journal of Energy Resources Technology.

“The idea was to mold flat material samples, test them by bending, and see if the material could heal itself,” says Arun Kumar Koralagundi Matt, a UWM graduate student. “I’d say it was a success.”

Koralagundi Matt and his colleagues first made samples with several layers of plain-weave fiberglass like that used in many wind-turbine blades. They mixed Grubbs’ catalyst, commonly used in synthetic organic chemistry, with an epoxy resin, and evenly dispersed it throughout the fiberglass.

The researchers then filled ultrathin borosilicate glass capillary tubes as long as a fingernail with a liquid “healing agent” that causes the epoxy to harden when the two come into contact in the presence of Grubb’s catalyst. They then laid the tubes lengthwise in different layers and sections of the fiberglass, depending on the test.

“Ideally, the tubes should act like blood vessels throughout the body,” says Koralagundi Matt, who has since graduated and is now working as a product engineer at Carnes, an HVAC systems manufacturer in Madison.

The researchers then used a universal flexing machine and standard tensile tests to gauge the strain, stress, and other properties of the material.

As soon as they heard the fiberglass crack, the researchers ended each test and examined the areas of stress where the glass capillary tubes also broke. At that point, the healing agent would seep into the cracks near the tubes, react with the Grubbs’ catalyst, and harden the epoxy.

The researchers also built and tested a wind turbine prototype, using two standard blades and one embedded with the self-healing system. After stressing the blade and allowing it about an hour to complete the healing process, the material recovered about 90 percent of the flexural strength it had lost from fractures and other damage. Koralagundi Matt says that recovery was as good as or better than that of similar self-healing materials and could add years to the life of the blade.

Still, adding the tubes reduces the fiberglass’s average tensile strength and flexural strength by 25 percent and 9 percent, respectively, and Amano’s team is now figuring out how to add more tubes to the material without weakening it, and how to make the blades easy to manufacture as well, says Koralagundi Matt.

For Further Discussion
The idea was to mold flat material samples, test them by bending, and see if the material could heal itself.Arun Kumar Koralagundi Matt, UWM graduate student