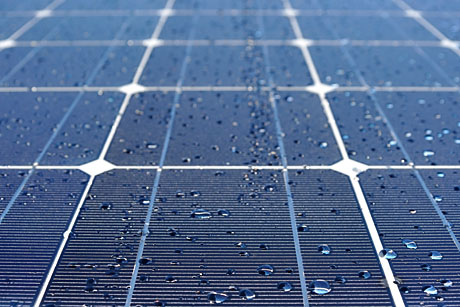 Solar panel conversion efficiency, typically in the 20 percent range, is reduced by dust, grime, pollen, and other particulates that accumulate on the solar panel. "A dirty solar panel can reduce its power capabilities by up to 30 percent in high dust/pollen or desert areas," says Seamus Curran, associate professor of physics at the University of Houston and director of the Institute for NanoEnergy, which specializes in the design, engineering, and assembly of nanostructures.

Cleaning dirty panels with commercial detergents can be time-consuming, costly, hazardous to the environment, or even corrode the solar panel frame. Ideally solar panels should be cleaned every few weeks to maintain peak efficiency, which is especially hard to do for large solar-panel arrays.

"Cleaning can cost up to five dollars per panel," says Curran. "That might not sound like a lot of money, but if you have 52,000 panels it adds up quickly."

To solve this problem, Curran and his nanophysics group in the Institute for NanoEnergy developed a self-cleaning nanohydrophobic material that coats the solar panel to maintain peak efficiency over longer periods of time.

"The coating itself is very robust," says Curran. "An actual covalent linkage holds it to surface of the panel, creating a strong chemical bond. This is a big advantage over spray-on coatings, which gradually degrade with time."

The principle behind a hydrophobic coating is that the layer forms a barrier so that water accumulates on the surface in an almost spherical shape, but is blocked from adhering to the surface by the barrier. This means that when a treated surface is tilted at an angle, the water rolls off the surface like "a sphere rolling down a slide," says Curran. "What is unique in this case is that the nanocoating is so thin (8 nanometers) compared to normal hydrophobic coatings that can be microns thick."

Curran's nanohydrophobic coating can be applied to a variety of surface materials, including glass, aluminum, cloth fibers, wood, textiles, and plastic. The layer is so thin that it does not scatter light, and therefore, does not interfere with the solar panel's performance.

Water is one of the main reasons solar panels get dirty. Rain and condensation settle in the microdepressions present in the glass surface, where they attract particulate matter. The water quickly evaporates, leaving a dirty residue behind that is difficult to remove. However, an application of the nanohydrophobic layer fills in the microdepressions, creating a smooth glass surface that cannot hold water.

"As the water is repelled by the treated surface it will also pick up and carry away the dust and dirt, thereby cleaning the panel naturally," says Curran.

The material has been tested at the FOCAS Institute in the Dublin Institute for Technology in Ireland, where Curran is an adjunct professor, as well as facilities in North Carolina. Preliminary results have shown that the coating repels both fresh and saltwater, indicating it should be effective in marine climates as well.

"We have the coatings on 24 solar panels that have been environmentally tested in light, rain, and pollen," says Curran. "I am pleased to say that we have survived in these environments and the panels are producing lots of power."

The product, named the "Self-Cleaning Hydrophobic Coatings (SCHN107TM) Layer," has been licensed by C-Voltaics, a start-up energy company that is a spinoff from the University of Houston. When commercialized it will improve the efficiency and reduce the maintenance needed for any photovoltaic system. The proprietary coating will also allow deployment of solar panels in harsh (dust, salt) environments with minimum performance degradation.

Because it works so well on a variety of different surfaces, SCNH107 has a number of potential applications in aviation, aerospace, medical devices, advanced manufacturing, natural sciences, renewable energy, and architecture, both as a hydrophobic layer and an anti-corrosive.

The hydrophobic coating is held to the surface of the solar panel by a strong covalent bond, which is a big advantage over spray-on coatings, which gradually degrade with time.Seamus Curran, associate professor of physics, University of Houston