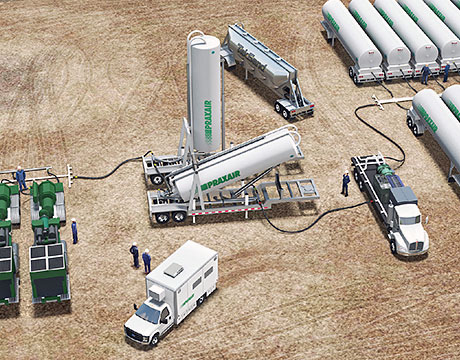 Scratching the Surface of Hydraulic Fracturing

Although much of the hydraulic fracturing debate focuses on unseen effects below ground, the surface impacts of drilling and ongoing activity are in plain sight. Operators make their own roads to carry heavy equipment to and from the well site. They run pipelines, install water-pumping systems, build power grids, and dig storage ponds for wastewater. Each of these activities is a potential point of community conflict, and also adds to the well’s operating costs. Everyone stands to gain from emerging technologies that increase production efficiency and reduce surface impacts.

Something in the Water

In a single operation, some 2 million to 10 million gallons of water are injected into the wellbore along with chemicals and abrasives that free oil or gas trapped in shale. Water consumption and wastewater management are two sides of the same controversial coin in unconventional drilling. Energy companies and some environmental groups alike are optimistic about new technologies and best practices that address these issues and maximize production efficiency at the same time.

Water scarcity threatens the industry’s ability to profitably drill shale oil or gas wells in a number of potential deposits in dry western states. Buying and transporting water to these fields is costly and the market is competitive. Even in areas of abundant water, researchers say withdrawal for fracking lowers groundwater levels and affects water available to lakes and stream systems.

Fracturing fluids combine fresh water with chemical additives and abrasive proppants like sand. Delivered under pressure through the wellbore, the fluid creates fissures in the underground shale formation to free trapped oil and gas. Most of the fracking fluid is absorbed underground, but between 20% and 40% flows back to the surface over several weeks, carrying with it naturally occurring groundwater, minerals, clays, dissolved solids, hydrocarbons, and radioactive materials. U.S. wells generate about 21 million barrels of this flowback every year.

“There are already identified and accepted best practices that enlightened energy companies should engage in immediately,” said energy subcommittee member Prof. Stephen Holditch, head of the Department of Petroleum Engineering at Texas A&M University. “In fact, most oil and gas operators already follow these best practices or they are developing plans to apply these ideas.” The concept of reduced emission completions establishes procedures and tools that minimize the risks and headaches of water management and reduce the likelihood of hazardous emissions or spills that impact local water and air quality.

So-called waterless fracking is something of a Holy Grail in the shale gas industry. Innovations are available or in the wings that substitute water with gases, gels, or supercritical fluids, often with properties that justify their cost by stimulating more energy production.

Canadian company GasFrac (Calgary, AB, Canada) specializes in waterless fracking using liquid petroleum gas. The company’s closed-loop set up combines specialized storage tanks, blenders, pumps, and mixing equipment. LPG is fed from tanks into pressurized sand blenders. The result is a gelled LPG-sand fracking slurry. The company claims 90% to 100% of the LPG can be removed from the production stream.

The DryFrac approach, developed by Praxair (Danbury, CT), combines sand and liquid carbon dioxide in place of water. Energy companies have long used CO2 to rekindle production from older vertical wells. The DryFrac technique adapts the practice for unconventional extraction. The technology uses the company’s CO2 blenders to prepare the mixture, which is injected down the wellbore with high-pressure pumping equipment. The company states that 30% to 50% improvement in initial production rates are possible in water-sensitive areas, primarily because CO2 has lower viscosity than water and can create “more complex fractures and fracture connectivity.” The pressurized CO2 vaporizes, helping to energize the production stream for increased initial recovery of oil or gas.

Engineers have reported some success with experimental methods that use CO2 or other liquefied gases. General Electric is looking at chilled supercritical fluid CO2 through its Ecomagination green-energy research program. GE’s goal is to reclaim CO2 waste products from coal-fired power plants for use – and ultimately re-use – in fracking fluids. Researchers at Colorado School of Mines say their cryogenic fracking technique injects -321 degree F liquid nitrogen or CO2 into heated shale formations, where the temperature and pressure differences create bigger fissures that increase production. Liquid nitrogen evaporates underground, eliminating the need to process it as flowback. All these waterless techniques sidestep the problem of saturation that can cause clay formations to swell and block the release of oil or gas.

The atmospheric emission of methane from unconventional oil and gas production is a contentious issue. In January 2015, tougher new EPA rules took effect to reduce production-related atmospheric releases of volatile organic compounds (VOCs), methane, and hazardous air pollutants (HAPs). All told, EPA expects the restrictions to cut 2015 emissions of methane by 1 million tons, of VOC by 190,000 tones, and of HAPS by 12,000 tons.

The rule, among other actions, requires the use of reduced emissions completion (REC) practices wherever they are feasible. Until now, operators could choose to vent or flare the gas produced through flowback during the well-completion and testing stage. The new rule allows that practice only in tandem with REC methods. In addition to conflicts when flaring is performed in high fire-risk areas or near residential areas, the practice wastes natural gas and other hydrocarbons that could be sold. REC methods help energy companies cash in on gas that would have been burned off, while leaving less waste material to clean up and dispose of when the job’s done. In the basic REC set-up, flowback from the wellhead is piped through a sand trap to remove most of the particulate content and into a three-phase gas/liquid separator. Marketable gas and condensate (liquid hydrocarbon) are directed either to a dehydrator or directly to the sales line. The remaining fracking fluid flows to open pits or tanks to await processing for discharge or disposal.

Emerging technologies like these – and more like them in the wings – could make fracturing more attractive, both above ground and at the bottom line.

For Further Discussion
In fact, most oil and gas operators already follow these best practices or they are developing plans to apply these ideas.Prof. Stephen Holditch, Texas A&M University

Quiz: What's Up with Hydrogen