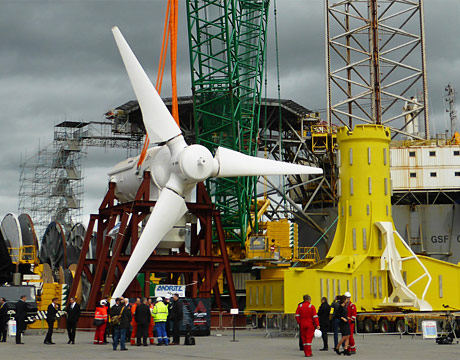 Scotland Gets Serious About Tidal Energy

Scotland is intent on exploiting the fantastic potential along its shorelines for converting tidal energy to electricity. The Scottish government is helping to fund a number of tidal power sites around the Orkney Islands, Pentland Firth, and the Shetland Islands. Some of these are expected to generate as much power as a nuclear power station—about 1.2 GW of green energy, enough to power up to 750,000 homes.

Studies suggest one-third of the United Kingdom’s total electricity needs could be met by tidal power alone.Scotland’s power sites are located in narrow sea channels that have some of the world’s strongest tides—speeds of up to 16 knots, or 19 mph, have been recorded.Two of the most promising projects to date are the MeyGen Project in the Pentland Firth and the Shetland Tidal Array off the Shetland Islands.

Pentland Firth andOrkney Waters, along the northern coast of mainland Scotland, encompass 50 percent of the UK’s tidal resource and 25 percent of Europe’s tidal resource. It is also the location for theMeyGenproject, the world’s largest tidal stream array project. Operated by Edinburgh-based tidal developerAtlantis Resources Limited, when completed the project will deliver 398 MW of energy from offshore tidal stream turbines to the UK National Grid by 2020.

Turbines are first installed on their foundation structures before being deployed in Pentland Firth. Once construction of the array is complete, the MeyGen tidal farmwill consist of 269 turbines that generate enough electricity to power 175,000 homes in the United Kingdom.

Edinburgh-basedNova Innovation’sturbine development project in Yell Sound, off the Shetland Islands, has already delivered tidal-generated electricity to the power grid. After installing the first turbine in March, the second in a series of five 100-kW turbines was deployed in August. The third will be installed at the start of 2017, which will complete the first phase of the array. “Then we’re looking to add another two devices in 2017/2018 to bring the array up to five devices, with a capacity of 500 kW,” indicates Simon Forrest, managing director of Nova Innovation. The first turbine has delivered electricity on a commercial basis into the local electricity grid soon after it the turbine was installed.

Nova’s M100 tidal turbine features a rotor diameter of 9.5 meters and is a gravity-mounted device that docks with a substructure that sits on the seabed in about 30 meters of water with draught clearance of about 15 meters. The complete system, including ballast, weighs around 140 tons.

Nova’s technology is designed for safety, reliability, and minimum lifetime cost of energy, notes Forrest. “The Nova M100 device builds on the valuable learning we gained from an earlier prototype deployed in 2014,” he says. “The plug-and-play modular design—which enables it to be easily transported and deployed in a wide range of locations around the world—and our ongoing focus to improve reliability by reducing components create exciting challenges and opportunities for our engineers.”

Potential as Strong as the Tides

Tidal power is an untapped source of clean, green, and reliable energy. What distinguishes it from other sustainable sources is that it is predictable hours, months, years, even decades ahead. And, with the turbines anchored to the sea bed, there is no visible blemish on the landscape once they are deployed.

The UK-based Carbon Trust estimates the global tidal energy market will be valued at about US $166 billion by 2050. Atlantis Resources, Nova Innovation, and other companies are planning to develop more sites off the Scottish coast as demand grows.

“Our vision is to utilize this abundant resource to improve energy security, eradicate carbon emissions, and ultimately delivering low-cost predictable power,” says Forrest. “This can be achieved in Scotland and across the world by using tidal turbines in offshore tidal sites, estuaries, and run-of-river locations.”

"Scotland is at the forefront of capturing power from the tides and waves,” indicates Jenny Hogan, director of policy at Scottish Renewables. "The country is already home to some of the most advanced marine energy technologies anywhere, as well as the European Marine Energy Center, arguably the most advanced marine energy proving site in the world. With companies like Nova and others all working on developing this cutting-edge technology, the sector holds huge promise for the future."