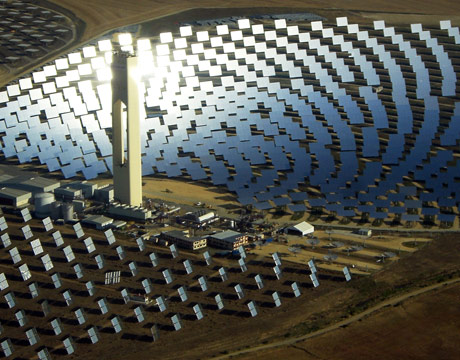 With photovoltaic energy prices dropping and concentrated solar power (CSP) towers operating at higher temperatures, the use of salts in CSP trough plants is being investigated to lower operating costs, improve plant efficiencies, and enable operation at higher temperatures. Most trough plants with synthetic or organic oil heat transfer fluids (HTFs) are limited to less than 400 °C.

Using salts can raise that temperature up to 550 °C, allowing steam turbines to operate at greater efficiency, among other advantages. Even though there are no commercial trough CSP plants using salt yet, new industrial-sized plants designed to incorporate their many advantages are currently entering the demonstration phase.

Liquid salts used for heat transfer in power plants are called molten salts because normally they are solids at standard temperature and pressure. Conventional mixtures of sodium nitrates and potassium nitrates are already proven as energy storage media in trough and tower configurations. The new concept is to use those nitrate salts as the HTF as well as for storage, which can lead to a more efficient trough plant design.

Salts are cheaper, denser, and can retain more energy per volume than oil-based HTFs. They can be directly stored and accessed at near-ambient pressure, not at oil-based HTFs’ considerably higher vapor pressure. A larger tank can be used for both expansion and short-term storage when the fluid is hot, minimizing the need for additional tanks and heat exchangers, and making it easier to incorporate heat storage.

In addition to offering favorable storage conditions, as an HTF, molten salts also:

Where leaking synthetic oil HTFs pose spill and fire hazards, leaking molten salt will solidify and can be cleaned by scooping with a shovel.

Salts do not degrade over time, do not need to be replaced, and do not exhibit the hydrogen permeation problem that oil-based HTFs exhibited. Craig Turchi from the National Renewable Energy Laboratory’s Concentrating Solar Power Program, Washington, DC, believes the lifetime of molten salts will easily match the lifetime of the trough plant.

Both oil and salt trough plants are designed to continuously circulate HTF through loops, even at night. If molten salt cools below its melting point for a few days or weeks due to loss of circulation, pipe insulation, or a power blackout to the plant, the salts can freeze and contract. Turchi explains that contraction itself is not a problem, but when the salts melt, they expand. If a pipe containing frozen salt is filled solid, it may rupture upon melting, but it is possible to re-melt the salts over the course of days or weeks.

Recent freeze-thaw tests at Sandia National Laboratory, Albuquerque, NM, showed heat collection elements (absorber or receiver tubes) could also be permanently damaged if they were completely filled with salt when it froze. They noticed that in a sloping solar field, only the receivers at the low ends of the collector assembly were completely full, implying there could be opportunities to minimize damage risk with the solar field design.

Most research efforts have been focused on creating or locating compatible salts with lower melting points so they don’t freeze. By adding additional ingredients such as lithium nitrate, some researchers have been able to reduce melting points to as low as 80 °C by creating more complex ternary, quaternary, or higher salt blends. This is still higher than ambient temperature in CSP trough power plants, but far lower than the melting point of conventional nitrate salt mixtures at 220 °C. Despite this finding, lithium nitrate is a costly additive, so the search continues.

New CSP test facilities are being designed and built to test more sophisticated salt blends with lower melting points, such as the ENEA’s industrial scale salt trough test plant Archimede in Sicily, Italy, and Siemens’ Portuguese plant being built in the second quarter of 2011.

At this point, the switch to salt is considered an operational risk, but is beyond most of the technological barriers to implementation. It is hoped that the tradeoffs made at these new plants will enable cost savings and improved efficiency due to salt’s favorable thermal properties.

Even though there are no commercial trough CSP plants using salt yet, new industrial-sized plants designed to incorporate their many advantages are currently entering the demonstration phase.