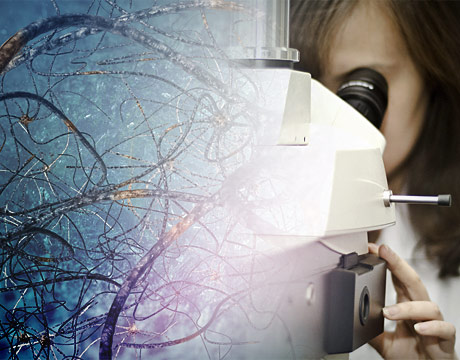 The Role of Force in Neurons

Muscles and bones are the stuff of force. In the body, these two do the heavy lifting, providing support. Neurons, of course, serve an altogether different purpose, transmitting messages, for which there’s no need for strength.

And yet, as neuroscientists have known for the past 30 or so years, if you grow a neuron in a petri dish, it comes out straight and taut. “If it’s very straight it must be taut, there must be more force in it,” says Taher Saif, a professor of mechanical science and engineering at the University of Illinois at Urbana-Champaign. “Why do the neurons have this force?”

Saif set out to answer this question. First, he needed to know if the stiff neuron phenomenon was exclusive to the petri dish, or could be found in living flesh. A few sensors in a fruit fly embryo revealed that indeed the neurons were taut in vivo as well. But that didn’t explain why.

“That was important to find, but not as exciting, because, you know, what is this tension doing?” So Saif and his team got back inside a fruit fly. This time they severed the neuron in the middle.

A typical, unsevered neuron has a phalanx of neurotransmitters at the end waiting for a signal from brain or spine. They don’t leap off to do their thing—activate a muscle, gland, or another neuron—until they get the signal. But after Saif’s snip, the neurotransmitters diffused themselves in the neuron. The left their usual gathering spot and simply dispersed.

But these messengers were not at all lost forever. When Saif pulled the cut ends taut again, using micropipettes, the neurotransmitters returned to their proper place at neurons’ end. Retightening of the neuron brought the neurotransmitters back to their rightful place where they could properly await orders from above. “Neurons were never supposed to have anything to do with mechanical force,” says Saif. “They are for carrying signals, making us think, making us sense. What we found is that, for as yet unknown reasons, they generate this force, and it needs the tautness to accumulate neurotransmitters at the junctions.”

There was no way for Saif to use his micropipettes to slacken the fruit fly neuron from the ends, rather than snip, to see the same effect. Neurons want to remain taut, and when slackness is introduced by bringing the ends together, they shorten themselves in a matter of seconds to maintain the same level of tension. But it takes about half an hour for the neurotransmitters to redistribute themselves throughout the neuron. So cutting them was the only option.

Exactly why the neurotransmitters leave their posts when a neuron is loosened isn’t yet known, but Saif has his ideas. “If it’s taut, all the segments align themselves and the route is very continuous,” he says. “But if it loses its tautness, they tend to randomly orient themselves.” The neurotransmitters may get lost at the bends, unsure of how to find the end where they belong.

Though this is just the first glimpse of the role of neuron force, Saif’s research could conceivably point the way toward understanding neurological diseases. “If the tautness cannot be maintained, from a lack of glucose or whatever it is, it begins to relax, and the neurotransmitters are not available,” he conjectures. “That may be one of the reasons for memory loss.”

As we learn more and more about the role of tautness, we’ll also learn the price of loosing it.

For Further Discussion
Neurons were never supposed to have anything to do with mechanical force. Prof. Taher Saif, University of Illinois at Urbana-Champaign