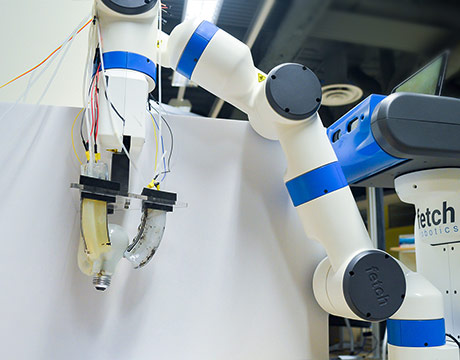 The old set-up line, “How many robots does it take to screw in a light bulb?” has a new answer, thanks to a team of engineers at the University of California, San Diego.

The team has created a robotic gripper capable of picking up and manipulating fragile objects. Unlike previous grippers, it can twist objects, sense them, and build models of what it manipulates, enabling it to operate in low light or with poor visibility. The robot’s embedded tactile sensing can discern an object’s shape to complement its other sensing modes.

The gripper contains three fingers, each consisting of three soft, flexible pneumatic chambers that move when air pressure is applied, enabling the manipulation of objects it holds. Each finger is covered with a skin made from silicone rubber with embedded sensors comprised of conducting carbon nanotubes. The rubber is rolled up, sealed, and slipped onto the fingers for a skin-like covering.

“Many other soft robotic grippers exist, but ours is unique because of its exclusive use of soft materials for the fingers, the ability to twist objects, and the sensing layer to both help with control of the hand and to allow modeling of the objects it handles,” says Michael T. Tolley, assistant professor and roboticist at the Jacobs School of Engineering who led the engineering team that presented the device at the International Conference on Intelligent Robots in September 2017. The device mimics what happens when someone reaches into their pocket and feels around for their keys.

More for You: Read about the latest in robotics technology

In fact, the main goal for the project was to design a soft robot that could achieve complete motions and the “integration of the embedded sensing abilities for feedback control and integration,” Tolley says.

“We chose a three-chambered design because it enabled us to cover a hemispherical workspace,” he adds. “We went through many iterations on the geometry and the soft material. Sensor integration is a particular challenge, as our sensors must be distributed over the actuators as opposed to the discrete joints of traditional robots, leading to challenges with fabrication, integration, and durability.”

Testing the gripper on a Fetch Robotics arm, the team was able to demonstrate that device could pick up, manipulate, and model items as varied as light bulbs and screwdrivers. Indeed, one gripper deployed by one robot can apply just enough force and dexterity to tighten and loosen a light bulb.

“We believe this type of gripper would be useful for agricultural applications such as picking fruit, and for robots capable of direct interaction with humans [such as] home assistance robots,” Tolley says.

Neil Cohen is an independent writer.

For Further Discussion
Sensor integration is a particular challenge, as our sensors must be distributed over the actuators as opposed to the discrete joints of traditional robots.Asst. Prof. Michael T. Tolley, University of California San Diego