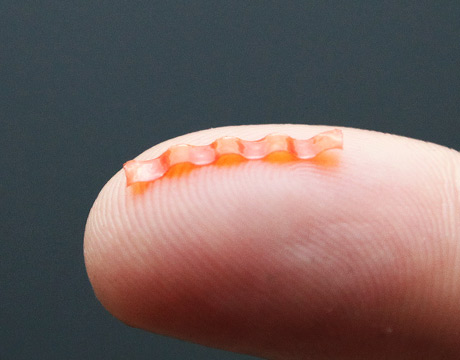 The 15-millimeter caterpillar robot is tiny enough to rest on the fingertip. Image: University of Warsaw

Through a process called biomimetics, engineers borrow design ideas from nature—including from the ways creators navigate their environment—to create engineered products that mimic the original.

For robotic design, they’ve looked to animals that move in ways uniquely suited to the jobs they need to perform. Spiders, for example, can travel quickly over bumpy, difficult terrain thanks to the hinged nature of their eight legs. So robotic spiders move over terrain impassible to most land vehicles.

But until recently, engineers could only build robots that copy the way animals with relatively rigid skeletons and joints moved. That’s because robots traditionally rely on joints driven by hardware—usually electric or pneumatic actuators—to move.

But in the natural world, a large number of creatures have soft bodies with which they navigate their habitats. Earthworms, snails, and larval insects employ different strategies to move through complex environments. Robots built to employ the same types of strategies could navigate irregular landscapes like the ocean floor, the sides of mountains, even the surface of a distant planet or the veins within a human body.

Now, a team of researchers at the University of Warsaw has created a 15-millimeter soft-bodied robot that mimics the rippling way caterpillars move along flat surfaces. Like caterpillars, the robot can also climb slopes, squeeze through narrow slits, and transport loads and up to six times its own weight, says Piotr Wasylczyk, head of the university’s Photonic Nanostructure Facility, who led the robotic development team.

The caterpillar robot is “made entirely of plastic and feeds on light,” says Mikolaj Rogóz, astudent at the university who helped design the robot.

Difficult as it was to design soft-bodied robots, an even greater challenge was making them small, due to difficulties in power management and remote control. The need to pack actuators inside has kept miniaturization out of the equation, Wasylczyk says.

Designing soft robots calls for a new paradigm in terms of mechanics, power supply, and control, he adds.

The robotic caterpillar looks a long way from popular conceptions of robots: large, lumbering creatures made from metal with arms and legs; or more simply, the robotic arm used on a factory line to lift and lower. This little guy resembles nothing so much as a tiny line of plastic. That is, in fact, what it is.

The caterpillar robot contains no internal electronics. It’s made completely from liquid crystal elastomer, a plastic comprised of polymer networks that respond to changes in light. The researchers shaped the plastic materials into three-dimensional forms with predefined actuation performance.

The robot moves in response to a spatially modulated green laser beam that pinpoints and changes the shape of specific molecules in the plastic. The light-induced deformation allows a monolithic LCE structure to perform complex actions without numerous discrete actuators, Rogóz says.

“When scanning the robot with a laser beam, you can only stimulate and heat selected parts of it. This is how you decide which way the robot moves,” he says. “The deformation process is fully reversible,” Rogóz adds. “Once you cool the material down, it resumes its original shape.”

And it goes without saying that such a small robot is easily transported.

In the future, the caterpillar robot could be employed to assemble items into place. Or, it could be inserted into the human body to transport medicines directly to a human organ, a process called targeted medicine, Rogóz adds.

That process could be about a decade away, however, as researchers would need to find a new way to power the robot. Light, of course, couldn’t reach within the body, he says.

Research into robots that don’t contain internal power systems or engines, but that can be steered externally, whether through light or another source, is just beginning, Rogóz says.

We’re not yet at the point of looking closer at that caterpillar crawling across the yard to determine if it’s real or robotic. But like actual caterpillars, their robotic counterparts will be a necessary addition to the workings of everyday life.

When scanning the robot with a laser beam, you can only stimulate and heat selected parts of it. This is how you decide which way the robot moves.Mikolaj Rogóz, University of Warsaw