Robot Rises to the Challenge of Toolmaking

Robot Rises to the Challenge of Toolmaking 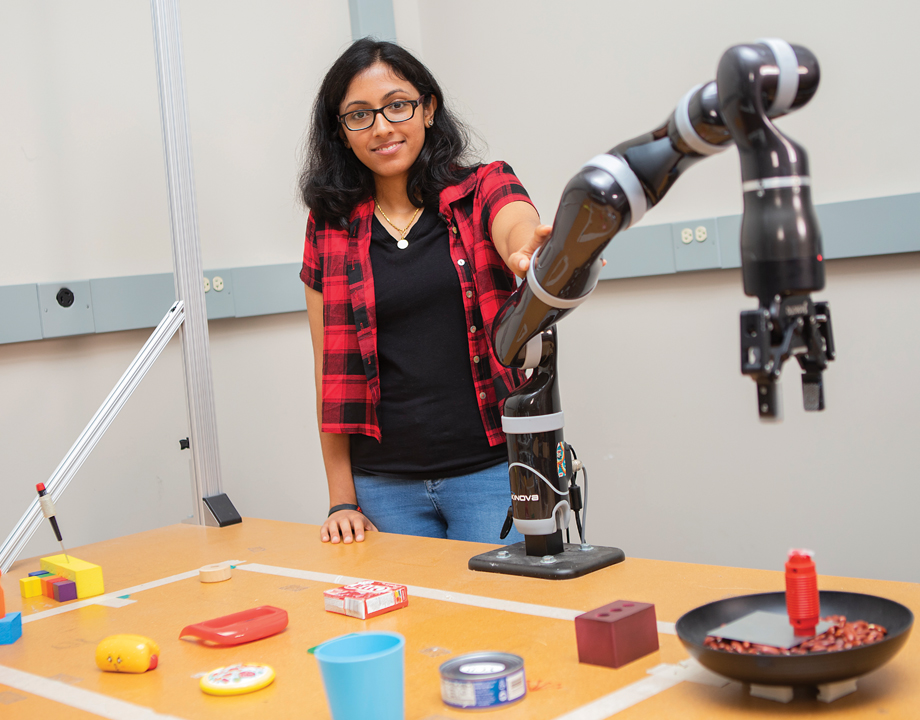 Fabricated Metal Product Manufacturing Robotics
Ever used the tip of a butter knife as a screwdriver when you’ve misplaced the needed tool? The idea likely just came to you as you looked around your kitchen for something that would work in a pinch. But that style of ingenuity is beyond the scope of a robot. Though its networks and sensors and software work in harmony, helping it grasp objects, swivel, and move, the robot can’t “think” creatively to construct simple tools on the fly.

But can toolmaking innovation be programmed into their robotic code?

“That’s an example of humans rising to meet a challenge creatively where a robot cannot,” Nair said. Her doctoral thesis focuses on how to program robots to use objects around them to meet unexpected challenges.

“The idea is to enable robots to make the tools they need from whatever they have available to them at the time,” Nair said.

She’s part of a team of researchers at Georgia Tech’s Robot Autonomy and Interactive Learning (RAIL) Lab that has created a robot that uses machine learning to reason about shape, function, and attachment of unrelated parts. They named their robot RoboGyver after the 1980s action-adventure TV series about Angus MacGyver, a secret agent who solved problems on-the-fly using the everyday materials he had at hand.


As a RoboGyver researcher, Nair develops algorithms that allow the robot to select the objects needed to construct a tool for specific use.

The robot comprises a table-mounted robotic arm with a pincher at the end. An overhead camera acts as the robot’s “eyes” to view the objects on the table, said Sonia Chernova, associate professor at the Georgia Tech school of interactive computing, who leads the RoboGyver research.

The work builds on research done by former Georgia Tech associate professor Mike Stilman, who developed robotic algorithms to give machines the same level of dexterity, intelligent planning, and interaction as human brains.

The RAIL researchers trained the robot by giving it a set of random parts and told it to make a specific tool. The robot analyzes each object’s characteristics and how they might be fit together to create the tool. Once RoboGyver has decided which objects to use, it attaches them together to construct the tool it has been instructed to build, Chernova added.


Just like a human looking for a way to unscrew the tiny screw in a back of a toy, the RoboGyver carries out what Nair says is one of the more interesting examples: grasping a coin with a pliers to act as a screwdriver.

“The robot reasoned that the pliers were able to grasp something and that the coin sort of matched the head of a screwdriver. Put them together, and it created an effective tool,” she said.

Currently, the robot can only come up with ways to attach the different shapes it sees. It cannot reason about particular material properties, a crucial step in advancing to usefulness in the real-world, Chernova said.

When perfected, the robots could be used in space- and deep-water exploration and for search-and-rescue missions where needed tools aren’t immediately available. Beyond that, future robots could help with domestic and household tasks, though Nair believes helper robots aren’t going to be available anytime soon.

When helper robots do arrive, they will need RoboGyver’s ingenuity to unscrew a toy when a screwdriver isn’t around.