A new robotic device, driven by pneumatic-based actuators and a unique equilibrium-point control system, is being integrated into clothing to predict user movement, aiding in mobility disorders.

The new robotic device, driven by pneumatic-based actuators and a unique equilibrium-point control system, includes several mechanical innovations and improves upon many assistive robots on the market, said Jonathan Realmuto, an assistant mechanical engineering professor at the University of California, Riverside, and project leader. 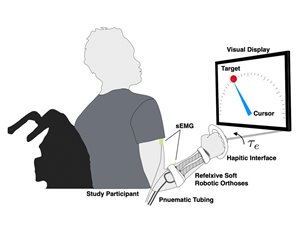 A new lightweight, self-adjusting robotic sleeve is helping people with upper mobility disorders do more, easily and comfortably. Photo: University of California, Riverside.
The robot, made from soft textiles like nylon and elastics for comfort and natural mobility, forms a type of sleeve that contains bladders that inflate to provide force for movement. The research is supported by a $1.5-million National Science Foundation grant.

Wearable, lightweight robots for people with upper mobility disorders are not widely available, said Realmuto, who collaborated closely with Jun Sheng, a UCR ME assistant professor, on the project. The team wants to change that.

The new technology, recently published in Frontiers, could eventually be used in a variety of applications and industries. “We’re prototyping for children with movement disorders, but our goal is for our technology to be universal,” Realmuto said. “These ideas can be translated to different sectors.”

The problem with many of the wearable robots today is that they are made from rigid parts, and do not provide a comfortable, effective fit to optimally transfer energy and provide support, Realmuto said. They also include motors for impedance control that add weight and rigidity to the device. While building on its past research, the UCR team chose several design and technology strategies to solve those shortcomings.

The team’s forearm robot is secured with soft bands just below the elbow and above the wrist. Two actuators sewn into a sleeve are made from a top layer of knit elastomers and a bottom layer of ballistic nylon. They sit on the top (dorsal) and underside (ventral) of the forearm. Offboard compressors deliver air to the actuators, but small, mobile air tanks could be used in the future, Realmuto said.

The ventral actuator provides motion to turn the forearm upwards, while the dorsal actuator turns the palm downward. A pneumatic pressure sensor and surface electromyogram sensors (sEMG), used to detect voltage from muscles when they contract, were integrated into the actuators. Disposable hydrogel comfortably secures the electrodes to skin.

The fabric is unique in that the top only stretches longitudinally, while the bottom layer barely stretches, Realmuto said. The researchers use the measurement of overall strain to gauge how the bladder volumes change when they are pressurized. Those readings aid them in accurately programming the actuators for different types of bending or twisting.

“In order to program different motions, you want some level of strain that's different in different directions,” he said. “That gives you a way program how the volume will change when you pressurize the actuators.”

In early testing (conducted without personalized algorithms) to gauge motor strength in different environments, the robot reduced the users’ efforts by 14 percent. “They can feel the robot helping them, and then they start using less energy,” Realmuto said, adding that he was pleased with the results.

Another Good Read: The Strength and Versatility of Robotic Grippers

The researchers will use the NSF funding to generate personalized algorithms and further develop the controller. They also plan to eventually add more degrees of movement and other advancements to the devices. The team is working with patients from a pediatric movement disorder clinic at Children’s Hospital of Orange County to test and refine the prototypes.

“All of these children we tested were really excited about the device,” Realmuto said.

The use of robotics in industrial settings continues to accelerate at a rapid pace. Explore this collection to learn more about automation, cobots, AI-enabled robots, customized robots, and drones.