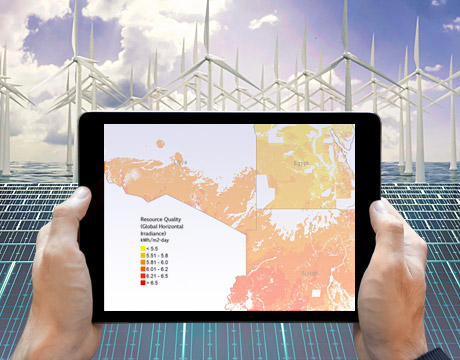 Renewable energy’s inroads into the United States and other developed countries is well-known, but it also is gaining traction in the developing world. Renewable energy zones in southern and eastern Africa, developed in coordination with the International Renewable Energy Agency, promotes renewable energy development backed by the governments of 19 countries. But identifying the most efficient sites for generation and transmission to load centers can be challenging, which is where a newly developed planning tool promises to increase efficiencies.

Kenya’s $680-million Lake Turkana wind project, for instance, will generate 310 MW, making it eastern Africa’s biggest power project. But the project suffers from its remoteness. Its 350 Vestas wind turbines are installed and operational but remain idle because of delays in construction of its 438-kilometer transmission line that will deliver the electricity to Suswa, near Nairobi. The government recently announced the line will not be operational until 2018.

Transmission lines and interconnections take longer to build than the turbine farm even without delays. Such issues may have been identified early in the planning process using MapRE, or Multicriteria Analysis for Planning Renewable Energy, saving potentially millions of dollars.

“Most renewable energy projects are developer driven,” says Ranjit Deshmukh, one of MapRE’s developers and now a researcher at Lawrence Berkeley National Laboratory. “If developers are given the right information, they can identify ‘hotspots’ of wind and solar resources.”

Those sweet spots don’t always take into account other details of the project, such as the distance from the generating station to the load center and the time it takes to build a project’s components. “A transmission interconnection can take as long or longer than three to five years to build,” says Deshmukh. “A renewable energy project can be built within a year.”

Deshmukh points out that the ideal site for a renewable energy project may not be where the sun or wind is most consistent. Other multiple criteria should be considered, including distance to the load center and population density, demand, and wind speed. Environmental and a number of social parameters should be included in decision making. A project could be more efficient and economical if it is built where the sun or wind are not optimal, but closer to where the power is needed. “But having the data is the biggest impediment to such an exercise,” he says.

MapRE provides the data to make better decisions. Deshmukh says he and co-developer Grace Wu at the University of California, Berkeley, spent two years collecting data sets on economic, environmental and other issues for 21 African countries participating in the East Africa and Southern African power pools, talking to utilities and other stakeholders. The tools include items such as wind speeds, timing, and other physical factors such as solar insulation.

Used together, planners can identify what Deshmukh calls “no regrets” sites that are accessible and have low cost and limited impact. Wu, Deshmukh and their colleagues published a paper in the Proceedings of the National Academy of Sciences on the African work, finding that many countries possess energy development potential “many times the projected demand.” They argue for regional interconnections, noting the most competitive wind and solar resources are “spatially uneven. Regional interconnections planned around strategic siting opportunities are crucial for realizing no-regrets wind and solar energy development that can be competitive with conventional generation in African countries.”

In Africa, Deshmukh points to estimates that show current electricity generation must triple by 2030. Renewables have a place and even an advantage in meeting those needs. Using the tool, he and the paper’s authors conclude “Multicriteria assessment of wind and solar potential for large regions of Africa shows how economically competitive and low-environmental-impact renewable resources can significantly contribute to meeting this demand.Additionally, interconnections and selecting wind sites to match demand reduce the need for [South African Power Pool]-wide conventional generation capacity by 9.5% in a high-wind scenario, resulting in a 6–20% cost savings, depending on the avoided conventional technology.”

Zimbabwe, South Africa, and Kenya now are using MapRE, says Deshmukh, and it is moving to other regions as well. The World Bank is using MapRE in Vietnam to add more solar power to the country’s grid, and the European Climate Fund is using it in a study to find alternatives to a fossil-fuel plant in Bangladesh.

“One of the goals with the World Bank is to reach out and put tools into the planning process,” he says. “It has been geared mainly toward planners, policy makers or regulators.”

The developers note that the open-source tool emphasizes utility-level solar or wind zones, although the spatial models could be used for off-the-grid development. It also includes a set of geographic information systems script tools for renewable energy zoning, allowing customization of a zoning analysis.

Deshmukh says the next step is to make the tools easier to use online. He says MapRE, while developed for use in the developing world, can also be used in the U.S. or elsewhere. Wu is now working on an iteration specifically for California where local regulations promote renewable power but siting complications show “a lot of time and money wasted in the process,” he says.

For Further Discussion
One of the goals with the World Bank is to reach out and put tools into the planning process.Ranjit Deshmukh, Lawrence Berkeley Laboratory