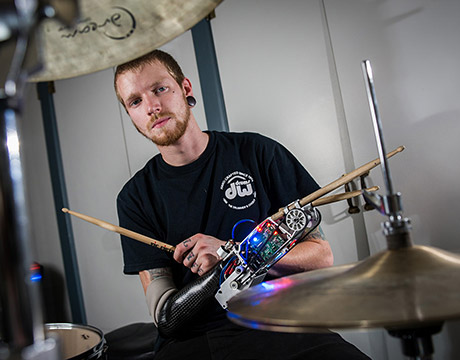 A Prosthetic Arm Bangs the Drums

Jason Barnes had dreamed of being a professional drummer since he was a teenager. But when he lost part of his right arm in a workplace accident at the age of 22, that goal was put in jeopardy.

Barnes didn’t give up. After the accident, he built himself a homemade prosthetic drumstick; unfortunately that tool didn’t give him the control he needed to play at a professional level. Then he teamed up with Gil Weinberg, a professor in Georgia Tech’s School of Music and the founding director of the Georgia Tech Center for Music Technology.

“We got a call from somebody who said one of his students lost his hand and is looking for a myoelectric robotic arm that would allow him to control and play music, almost like a wrist that he didn’t have any more,” says Weinberg, who is also a musician himself and an inventor of experimental musical instruments.

For You: Sensors Allow Robots to Feel Sensation

Together they made prosthetics that enable Barnes to continue making music. Not only can he drum, but he can also play the piano and the guitar. For more than a decade, Weinberg had been developing robotic musicians that performed as separate entities—that is, not attached to the body.

The doomsayers talk about robots taking away your jobs, and here is one example where the human won’t have a job without robotics.Prof. Gil Weinberg, Georgia Tech

The goal for Barnes was different. Although it is possible to drum with only one arm—notably, drummer Rick Allen continued performing for the rock group Def Leppard after a 1984 car accident took his left arm—Barnes wanted a prosthetic that would allow him to play drums very quickly and with great accuracy.

“Since he wanted the capability to flex and relax his muscle so that he can control the type of stick that’s being held, we put electomyographic sensors on the muscle, to make it tighter or looser,” Weinberg says. The hardware in the arm, according to Weinberg, uses two motors to boost dexterity and speed. The software includes a genetic algorithm, neural network, and deep learning to convert the signals from Barnes’s muscles into movement of the drumsticks.

The success Barnes had with his prosthetic prompted Weinberg’s team to build an auxiliary arm that attaches to the shoulder and is controlled via brain signals. They have also used similar AI techniques to develop a prosthetics hand dexterous enough to enable Barnes to play the piano.

“This technology can be used for anything that requires finger-to-finger dexterous control,” says Weinberg, who hopes to commercialize it. The human-robot collaboration has been life-changing for Barnes, who is now a traveling musician. He has performed on stage, including at the Kennedy Center in Washington, DC, and internationally.

“The doomsayers talk about robots taking away your jobs,” Weinberg says, “and here is one example where the human won’t have a job without robotics.”

Hear More! Listen to the first episode of ASME TechCast: Building the Case for a Diversified Workforce