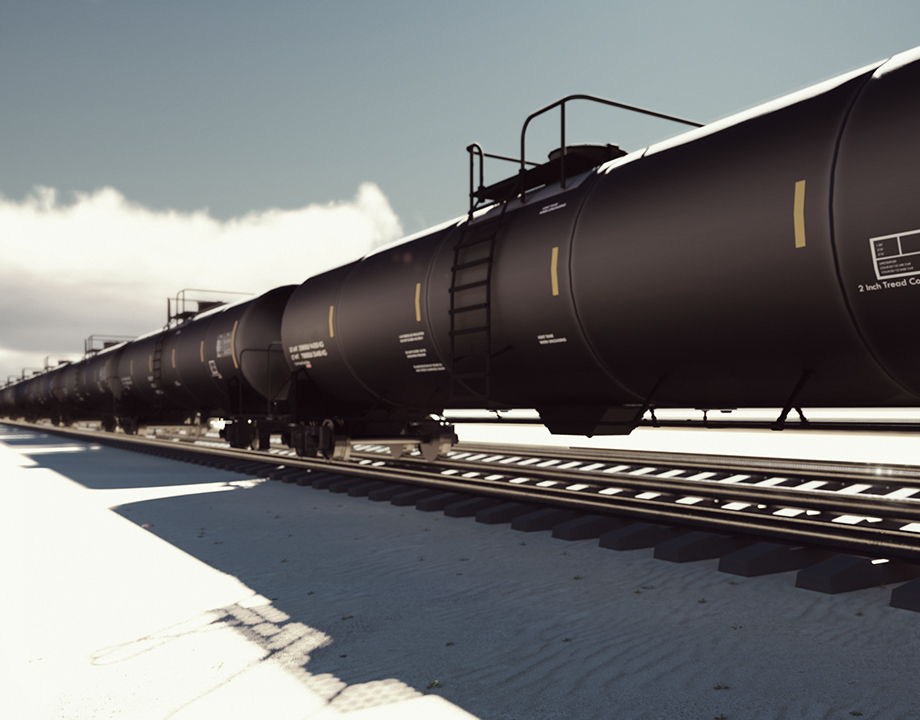 About 616 railroad accidents have occurred each year since 2010, according to the Pipeline and Hazardous Materials Safety Administration (PHMSA). Although overall train volume of hazardous materials is up, accidents involving tanks carrying those types of materials has declined, according to the Federal Railroad Administration. But those numbers still include major disasters, such as the 2013 derailment and explosion of tanks carrying crude oil in Lac-Megantic, Quebec; Aliceville, Ala.; and Casselton, N.D., which combined killed at least 43 people, destroyed dozens of buildings, and spilled millions of gallons of crude oil.

GangaRao and his team are using puncture- and fire-resistant composite materials to create what they call a Band-Aid or jacket that wraps around rail tank cars to prevent or limit massive leaks, explosions, and other disasters that can occur when tanks carrying hazardous material derail.

“Failure of these tank cars is a humongous problem,” said GangaRao, the Maurice and JoAnn Wadsworth Distinguished Professor in the Wadsworth Department for Civil and Environmental Engineering and the director of WVU’s Constructed Facilities Center. “People don’t recognize it, but there are many derailments and many failures.”

The research project is supported by $2-million grant from the Department of Transportation’s PHMSA to improve the overall durability of tank cars.

Current solutions used to limit or prevent punctures include building the tanks from high-carbon steel and/or reinforcing them with steel plates. But steel adds excess to the allowable total weight of the tank, limiting carrying capacity, is relatively expensive, and can take up to 50 days to add to a tank during a rehab or retrofit project. GangaRao believes he has a lighter, stronger, quicker, and more cost-effective solution based on polymer composite materials.

GangaRao began working with fiber-reinforced polymer composites in the late 1980s, using the material to build and reinforce bridges, buildings, and other structures. The material is noncorrosive and has a higher weight-to-strength ratio than steel.

Editor's Pick: The Past and Future of Supersonic Transport

For this project, GangaRao is developing different versions of the jacket by alternating sheets of light, strong fiberglass between layers of foam made from glass beads, which won’t melt until the temperature reaches about 2,400 degrees C. After combining about five layers of the material, he will then cover the jacket with an intumescent coating, which retards the spread of fire by releasing moisture.

Typically, the more layers added to the material, the longer it will take to burn, giving responders more time to prevent an explosion. The material will cost about $18 a square foot to produce compared with roughly $24 for steel and about three to four days to apply to a railway tank, which is typically about 60 feet long, the professor said.

Besides developing the material, the team is also working on the quickest and most effective system for applying the jacket. “It’s one thing to slap this on the top of the tank and another to make sure that it is going to bond well with the steel,” he said.

GangaRao plans to use vacuum infusion to suck out all the air trapped between the materials and to drive the resin into the laminates. The process will help to eliminate any voids or air bubbles in the material to ensure a strong bond. He plans to begin evaluating and testing the full jacketing system within the next few months.

“If this is successful, and we think it will be, the opportunities will be really great,” he said. “Not only can you save lives, the environment and properties on the ground, but you can also extend it to other areas of interest, like buildings to protect them against explosions or to protect tanks in the battlefield.”