The Power of Dual-Fuel Diesel Engines

The Power of Dual-Fuel Diesel Engines 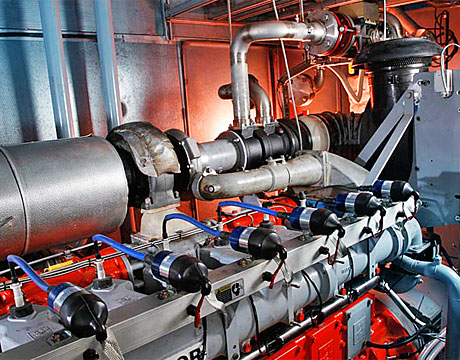 The abundant reserves of gas in the U.S. are also making companies think more about dual-fuel engines as a long-term solution. Natural gas/diesel dual-fuel engines offer a path toward meeting current and future emissions standards with lower fuel cost. However, numerous technical challenges remain, which require a greater understanding of the in-cylinder combustion physics. “For example, due to the high compression ratio of diesel engines, substitution of natural gas for diesel fuel at high load is often limited by engine knock and pre-ignition. Additionally, increasing the natural gas percentage in a dual-fuel engine often results in decreasing maximum load,” says Anthony J. Marchese, professor of mechanical engineering and director of the Engines and Energy Conversion Laboratory at Colorado State University in Fort Collins.

Knocking out the Knock

When operating at part load, dual-fuel engines can suffer from excessive incomplete combustion of the natural gas, which results in increased tailpipe emissions of methane and other pollutants. Another problem with natural gas is that chemical reactivity of the “pipeline quality” fuel can vary greatly from day to day, or region to region, depending on the percentage of ethane and propane in the natural gas.

“With natural gas, you don’t know exactly how reactive the fuel is since the composition can vary from nearly 100 percent methane [high resistance to knock] to less than 90 percent methane [greater propensity for knock],” says Marchese. “Therefore, understanding the phenomena that lead to engine knock in a dual-fuel engine is very important for designing engines and control systems.”

Through combined modeling and experiments, Marchese and his research team uncovered a new regime of engine knock observed in dual-fuel engines, which is different from the knock observed in spark-ignited engines. “Specifically, we observed detonation of the natural gas/air mixtures in regions between the individual diesel spray jets,” he states. “This was a surprise and suggests there may be ways to minimize knock in dual-fuel engines by designing the diesel injectors in a different way.”

Marchese teamed up with Woodward Corporation to explore a low-temperature combustion strategy known as reactivity controlled compression ignition (RCCI), which uses early diesel injection to create a reactivity gradient leading to staged auto-ignition, from the highest reactivity region to the lowest. “Natural gas/diesel RCCI has proven to yield high efficiency and low emissions at moderate load, but has not been realized at the high loads possible in conventional diesel engines,” says Marchese. “To obtain better agreement with experiments, we constructed a reduced dual-fuel mechanism using a two-component diesel surrogate. A sensitivity study was then performed on various model parameters, resulting in improved agreement with experimental pressure and heat release rate.”

Woodward Corporation has also developed an engine control unit (ECU) with a high-speed, on-engine processor and control algorithms to take cylinder pressure for each cylinder, for each cycle, and convert this high-speed information into “combustion metrics” such as center of combustion, rate of pressure rise, and peak pressure. “With this data available, the ECU is able to control combustion phasing in RCCI combustion—which is a key enabler to realizing this technology in practical applications,” notes Greg Hampson, senior principal engineer for Woodward Corporation’s Technology Group in Loveland, CO. “Additionally, the combustion metric feedback can be used to not only maintain good combustion phasing during changes in substitution rates, but also when the fuel quality changes, and early detection of conditions leading to knock, thus limiting the gas/diesel substitution rate to a safe level, rather than relying on a conventional knock sensor.”

Norm Olson, biomass and alternative fuels program manager at the University of Iowa’s Iowa Energy Center in Ames, has been conducting research on dual-fuel ammonia (NH3)/diesel, NH3/ dimethyl ether (DME) and NH3/hydrogen (spark ignition) engines. The use of NH3 as a fuel is a relatively novel concept, especially in dual-fuel applications. Carbon dioxide, nitrogen oxide, and particulate emissions are significantly reduced when NH3 is burned as a fuel.

“NH3 is a very high-octane fuel with a high resistance to pre-ignition,” says Olson. “Power output for engines operating on NH3 is increased compared to the power output for gasoline and diesel fuel in the same engine. Combined, these properties allow for extremely high engine efficiencies for engines designed to take advantage of the characteristics of NH3 fuel.”

There are also huge economic, environmental, and efficiency advantages associated with NH3 fuel. NH3 can be produced using air (for nitrogen), water (or any other source of hydrogen), and primary sources of energy (wind, solar, nuclear, coal, natural gas, etc.). The only significant emissions associated with NH3 are oxides of nitrogen, which can easily be controlled with NH3 via selective catalytic reduction. Delivery infrastructure costs for NH3 are orders-of-magnitude lower than hydrogen infrastructure costs and liquid NH3 contains 30 percent more hydrogen per unit volume than liquid hydrogen. In fact, NH3 is the second-most transported chemical in the world.

“We envision stationary engines as the initial application for NH3 fuel, followed by fleet vehicle conversions and eventual adoption by all transportation sectors, with the lone exception of air transportation applications,” says Olson. “Flexibility in both production and end-use applications, combined with high efficiency and unmatched environmental performance, make NH3 fuel the optimal choice for replacement of fossil fuels.”

Learn more about the latest innovations in energy solutions at ASME’s Power & Energy Conference and Exhibition.

For Further Discussion
Natural gas/diesel RCCI has proven to yield high efficiency and low emissions at moderate load, but has not been realized at the high loads possible in conventional diesel engines.Prof. Anthony J. Marchese, Colorado State University