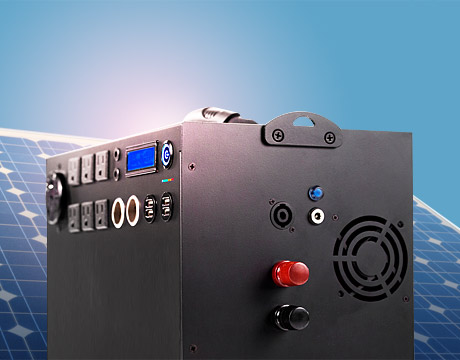 Two Idaho entities, one a university, the other a private company, have joined forces to design a portable, 5-kW solar generator with the goal of powering everything in a typical home from the lights to the refrigerator to the clothes dryer.

It all started when a University of Idaho (UI) researcher and an executive from Inergy Solar met at a 2015 workshop conducted by the Idaho Global Entrepreneurial Mission (IGEM). State-funded IGEM’s reason for being is to connect Idaho energy entrepreneurs with university faculty studying related topics in order to encourage private-public partnerships. The ultimate goal: enhancing the role universities play in helping businesses in the state grow and creating more economic opportunities.

Inergy, a marketer of portable solar generators, is a familiar name to outdoor enthusiasts and those who just want some time off the grid. The company makes a small, lightweight, 1-kW Kodiak generator system. According to CEO Sean Luangrath, customers have encouraged the company to step up the energy capacity for a system that would power an entire home without sacrificing the small size (9”x14”x9”) and portability (20 pounds). The more powerful generator planned will have five times the capacity of the smaller product, and the goal is to keep it under 100 pounds.

When Luangrath met Herb Hess, UI professor in the College of Engineering, he immediately recognized that Hess’s program had the exact expertise and resources he had been looking for. (That same year Hess became a partner in a $1.6-million grant from the Office of Naval Research to develop a 250-kW inverter incorporating advanced materials. The thinking is those same materials, mainly gallium nitride, might be used in conjunction with Inergy’s “compact” technology and be able to reduce the weight and dimensions of a larger inverter.)

Soon after that first meeting, the project was awarded a one-year, $178,000 grant from the IGEM program to develop a 5,000-W inverter using gallium nitride instead of silicon.“A gallium nitride unit is significantly smaller and somewhat more efficient so doesn’t generate as much heat which means we can keep the rest of the device smaller too,” Hess says.

In addition to working with the new semiconductor material, which has been called “the next silicon,” this project’s research will include a focus on network cybersecurity protection. Because of this, Hess recruited to the team Gregory Donohue, a professor of computer engineering, to serve as a link between Inergy Solar and UI’s Center for Secure and Dependable Systems, a unit that conducts research in cyber security. He will also oversee the design of a system to allow Inergy Solar’s generators to connect to an existing power grid, or to other neighboring systems.

Donohoe says the model for the future of alternative energy must incorporate the distribution of energy, either locally or back into the central grid. But that connection opens up the opportunity for hackers to disrupt or damage the system. “The old model of central power transmission and distribution just doesn’t scale very well to solar,” he adds.

Although the biggest challenge may be the size and weight of the inverter, which turns DC power from the sun into the AC power used by most home appliances, that’s not the only challenge.

“Another is how to deal with the heat, which is going to be significantly greater for a larger piece of equipment than the smaller model,” Hess says. “As with any electronic gear, there is a certain amount of waste heat generated that has to be taken out of the electronics.”

Hess foresees the new system to be, as with the smaller version, plug and play. “The idea is that the homeowner comes home with this under his or her arm, sets it down, and lays down some solar panels outside,” he says. The generator itself can be placed inside, with the most likely spot near the home’s circuit breaker panel to be plugged in and then there would be wires going outside to the solar panel.

If connected to the main grid or to a local area network, there would have to be a broker, very likely the power company, and a switchable, electrical network that connects the houses and the utility as well as a communications network to negotiate buying and selling or trading of power. While a logical communication medium is the Internet, that again puts the system at risk to hackers. Then the question is, says Donohoe, “How do we make it accessible and easy to use yet remain secure from hackers?”

The generator system that Hess and his team have begun designing will also have storage capability since he doesn’t expect many people will go off the grid entirely. “Most people looking to do their own energy still like reliability, which has been the hallmark of the North American power system for the past 80 years,” he says. “They will likely rely on the power company to provide energy storage when they can’t generate their own.”

For Further Discussion
The idea is that the homeowner comes home with [the generator] under his or her arm, sets it down, and lays down some solar panels outside.Prof. Herb Hess, University of Idaho