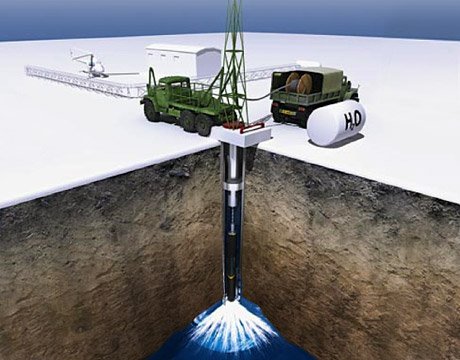 Oil and natural gas wells stop producing long before they’ve sucked dry all the resources in a reservoir. Particles of dirt, rock, as well as deposits of wax and other debris eventually clog the drainage area as well as the pores and passages introduced at a well’s birth. When debris first kills production, typically less than half of the resources below have been harvested.

Now clogged wells can be cheaply and cleanly rejuvenated with plasma pulse technology.

In the past, well owners hoping to flush out those plugged channels and get things moving again had to turn to dense chemicals, packers and high pressure, or explosives. Each of these comes with its own set of environmental dangers. And they can cost hundreds of thousands of dollars.

But now, with a technology developed in Russia, the well treatment company Propell has slashed those risks and the price tag, too. Natural gas and oil companies with a delinquent well can start producing again with a mere $10,000 or so, and with little cost to the environment.

The technique is fairly simple. A long tube is lowered into the well. Capacitors are charged and then dump their power in an instant—microseconds, actually. “How we generate the plasma is very much like a light bulb,” says Trent Hunter, Propell’s CTO. “We have a filament that extends across two terminals and when we discharge electricity stored in the tool, that filament glows white-hot and ultimately explodes. It’s the very fast release of that energy that generates the high power to create the shock wave. Some call it non-linear physics. I don’t think of it as nonlinear, I tend to think of it as very quick—we get a pressure pulse that goes form zero, to orders of magnitude of 10,000 psi, instantaneously.”

That plasma bubble travels laterally at a mile per second, hauling a shock wave along behind it, and radiating outward like waves in pond—but very fast waves. It’s also tuned to induce harmonics in the reservoir. Together, the shock wave and harmonics blast and clear away plugs in the well and any other potentially productive passage.

Conveniently, the blast is powerful enough to crush rock, but not so powerful as to harm steel. “It’s similar to hitting a brick on an anvil with a hammer,” says Hunter. “The brick gets smashed in the middle, but the steel is undamaged. It can absorb the energy of the hammer.” Thus the well gets cleaned but remains undamaged.

Other rehabilitative tools need to be pulled out of a well after a single blast, and must be redressed before being used again. But the plasma pulse streamer, as the tool is known, can deliver several sets of 100 pulses at a go. The entire treatment requires much less manpower and can be completed in a matter of hours, making it a cheap and more environmentally friendly option. “Certainly our technique has a very low footprint from a couple of different perspectives relative to our competition,” says Hunter. “It’s a low-energy technique, and it’s a low time and intervention technique, so we expend less carbon. It’s less pressure, and we don’t use explosives, and we don’t use chemicals.”

Oil and natural gas companies usually need rehabilitation sometime between the middle and end of a well’s life. But this technology has shown that there are advantages to using their treatment at the start. Before a well has produced its first barrel, drilling fluids may slow flow. “They get more productivity out of their well when they treat it with plasma pulsing at day one, rather than two or three years down the road,” says Hunter.

Whenever it’s used, the plasma pulse offers a cheaper, cleaner treatment than the options available in the past. “As an intervention technique,” says Hunter, “it is, in my opinion, one of the most compelling value propositions out there to rehabilitate productivity without the risks of the other techniques.”

Learn more and participate in the ASME Hydraulic Fracturing Conference 2015

For Further Discussion
It’s similar to hitting a brick on an anvil with a hammer. The brick gets smashed in the middle, but the steel is undamaged.Trent Hunter, Propell’s CTO