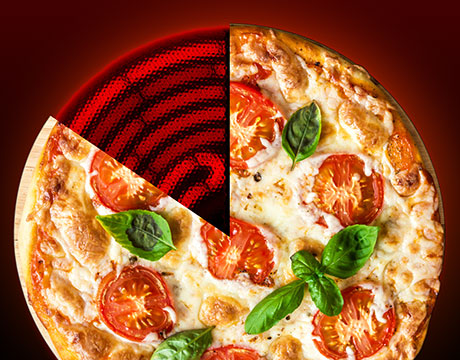 Several years ago, James Cotton, professor of mechanical engineering and associate director of the McMaster University Institute for Energy Studies, Hamilton, Ontario, started a project on thermal electric generators. At the time, he never imagined that it would end up involving pepperoni.

“When you look at this issue [of energy recovery], you start thinking about the continuous operator,” Cotton says.

With this in mind, Cotton came up with the unusual idea of working with the food service industry, which led him to contact the CEO of Pizza Pizza, a company not familiar to many in the U.S., but which provides more hot slices to Canadians than any other, Cotton says.

“They were interested in [the project] right off the bat,” he says. “Pizza ovens basically run 24 hours a day, seven days a week, because of the need to maintain a constant temperature of 260 °C. They also have a large air-to-fuel ratio because of the constant cooking. But only five to ten percent of the energy content, the fuel, goes into the pizza. There’s obviously an opportunity to potentially do harnessing when it comes to what’s lost.”

What Cotton eventually created was a pizza oven waste energy recovery system and generator that attaches to a pizza oven’s chimney. “It’s a heat exchanger that is coupled to a cooling loop that is integrated to components, in particular, thermal storage,” he says. “We are out to control, monitor, and optimize energy and we want to capture as much as possible without increasing energy consumption.”

In this case, the system, when attached to the chimney of a pizza oven, recycles the heat and turns it into electricity. It doesn’t involve any fouling. “Fouling is when grease evaporates and if it’s cooled too much it can trap particulates and affect the performance of the exchanger,” he explains.

“You’re looking at being able to heat the store [with this system]. We can preheat the air going into the oven and we can also run a small-scale DC microgrid to power LEDs, the point-of-sale system, and more,” he says.

The system includes an energy modeling feature that can tell if things are running properly, he says. “On average, a pizza oven uses fifty cubic meters of natural gas a day and that’s more than a Canadian home would use in a month in winter time,” he says. “What we create can get about fiveor sixof the ten kilowattsinto other usage.”

His system, which was installed in the training center at Pizza Pizza headquarters, could eventually find itself providing energy to many franchises, he says. But the project has already energized the McMaster University students who have contributed. “They love the idea partly because they love pizza,” he says. “It inspires enthusiasm because of the topic but it sneaks in the importance of reducing our environmental footprint. It just shows how everyday things in our life can be overlooked.”

For Further Discussion
On average, a pizza oven uses fifty cubic meters of natural gas a day and that’s more than a Canadian home would use in a month in winter time. Prof. James Cotton, McMaster University