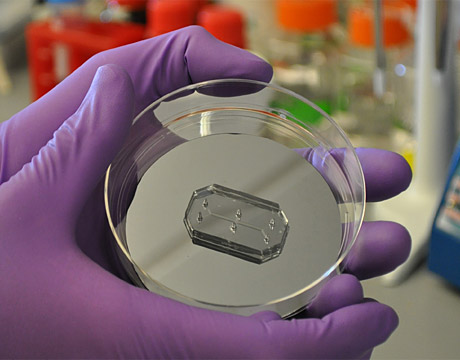 Lung-on-a-chip offers a new in vitro approach to drug screening by mimicking  the behaviors of a human lung. Image: Wyss Institute at Harvard University

Pharma Dips into Organs on Chips

“I have in my bag a kidney and a brain.” The plenary presentation by National Institutes of Health (NIH) Director Francis Collins at a recent biotechnology conference may have started on a macabre note, but no living creatures were harmed in its making. Rather, Collins carried in his bag two thumb-drive-sized plastic chips that could put hordes of mice and other laboratory animals out of work.

His talk marked the coming-of-age of organ-on-a-chip technology – a new 3D twist on the classic Petri-dish-based method of studying human cells and a more accurate alternative to animal tests. Organs or tissues on chips can recreate complex biological functions of both healthy and diseased human cells, giving scientists a new view of their mechanical properties, biochemical microenvironment, and 3D molecular structure. If they continue on their current trajectory, organs on chips could fundamentally alter how life scientists study human physiology, disease processes, and new drug candidates. The drug industry and federal health research agencies are investing in the technology as a promising way out of today’s expensive, slow, and failure-prone drug.

What’s in a Chip

The first organs on chips developed using microengineering technologies for cell biology applications came from researchers at Harvard’s Wyss Institute for Biologically Inspired Engineering. Their organs on chips are microfluidic systems embedded using advanced microfabrication technologies into a translucent polymer chip. Hollow microfluidic channels are lined with living human cells grown in culture to reflect the make-up of an organ or tissue of interest. New microchip technologies have enabled engineers to construct structures that recapitulate the complex interactions between multiple tissue types in an organ system – for example, it is now possible in a lung-on-a-chip device to measure the dynamic biochemical, biophysical and biomechanical relationships between lung tissue and the blood vessels feeding into it. Such processes enable not only diagnosis but prediction of a disease process over time. The Wyss Institute team is currently working to build and link 10 human organs on chips to reproduce whole-body physiology – the first human on a chip system.

The chip is not only functional but beautifully designed. At least according to judges at this year’s Design of the Year competition at London’s Design Museum. Wyss’s organs on chips took first prize – the first medical device so honored – as “a fantastic example of a minute object that takes design away from simply being aesthetically pleasing to having a global impact on the way we will live in the future.” A collection of chips will be on display at New York’s Museum of Modern Art until January 2016.

Chipping Away at Drug Development Bottlenecks

Organ-on-a-chip pioneer and Wyss Founding Director Donald Ingber views the technology as a sorely needed fix to a drug development process that is “broken.” As he told reporters, “Everyone knows it. The drug companies know it. The FDA knows it. But no one’s done anything about it.”

It currently costs millions of dollars to test any compound for therapeutic potential. From synthesis to approval, the develop process typically drags out over 10 years. For every drug that makes it through the pipeline to FDA approval, as many as nine others fizzle out along the way because they failed in human clinical trials. Factoring in the cost of those duds, the pretax costs of developing each new approved drug shoots up to an average of $2.6 billion average development cost of each new approved drug, according to the Tufts Center for the Study of Drug Development.

Although Big Pharma’s massive ramp up in research spending since the 1990s has cooled, the industry still pumps billions into the drug development pipeline every year. Paradoxically, the annual number of new FDA-approved drugs has plummeted in direct proportion to the increase in R&D spending. Any technology with reasonable potential to close the gap is bound to get noticed. If organ-on-chip technologies prove capable of accelerating the pace of drug testing, producing more reliable data, and reducing the financial and ethical drawbacks of preclinical research, everyone could win.

Drug companies, regulators, and animal rights activists have plenty to disagree about when it comes to drug research. But their respective agendas appear to align when it comes to organs on a chip. Diverse – often adversarial – stakeholders ranging from the People for the Ethical Treatment of Animals (PETA) to the FDA to the NIH are investing in organ-on-a-chip research at laboratories across the nation. For example, The National Center for Advancing Translational Sciences, part of the NIH, launched its Tissue on a Chip program in 2012 to create tissue-on-chip models for drug toxicity testing that combine an organ of interest with a liver model on the same device – allowing scientists to measure a drug’s therapeutic effect on the target organ and its toxicity in the liver.

For decades, scientists and drug companies have relied on animals from mice to monkeys to help them test the safety and effectiveness of new compounds. The Humane Society of the United States reports an estimated 25 million vertebrate animals are used in research, testing and education in the U.S. each year. More activist animal rights groups such as PETA put that number closer to 100 million. Many, if not most, of these animals either perish during an experiment or are euthanized after. Research on non-human primates – mankind’s closest physiological relatives – is especially contentious. Although primate labs are closely regulated and monitored by the U.S. Department of Agriculture, the seven existing centers in the nation are favorite targets for PETA scrutiny – occasionally with impact. In 2013, Harvard University rocked the drug development establishing by closing its influential primate research center under a cloud of controversy over its animal care practices. Emboldened activists have since mounted protests disrupting the construction of new animal research facilities under way at the University of Washington.

The search for alternative methods is fueled both by these animal welfare issues and by bioengineering advances. One intriguing alternative – 3D bioprinting – is now used to create highly detailed facsimiles of malignant tumor cells and the diverse constituents in their immediate orbit. These duplicates of the so-called tumor microenvironment create the possibility of printing an exact copy of a living patient’s tumor and measuring its response to various treatment combinations – all while the patient waits. Pioneering companies like Organovo (San Diego, CA) are developing 3D bioprinting for the research niche as they pursue the technology’s even-brighter future in large-scale anatomical recreation. Another animal-free paradigm, in silico simulation, applies high-end computational chemistry algorithms and 3D computer graphics for all-virtual drug discovery and screening. None of these techniques is mature enough to supplant animal models, but rapid advances and lower equipment costs are enticing researchers to try them out.

The animal testing paradigm is still entrenched in the drug development process and will be for some time. The U.S. Food and Drug Administration (FDA) still requires exhaustive preclinical animal testing of drug candidates before they enter human trials. And for an agency often characterized as slow to embrace new technologies, FDA’s strong support for chip-based alternatives has been a welcome departure.

For Further Discussion
I have in my bag a kidney and a brain.Francis Collins, NIH Director