Out of the Vortex

Out of the Vortex 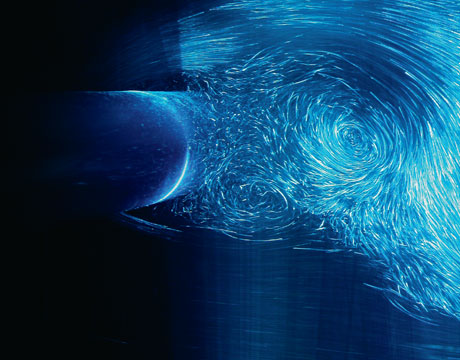 Water flowing over a cylinder is illuminated to show the vortices that are created.

Engineers have known about vortex-induced vibrations (VIVs) for at least 500 years. Leonardo da Vinci observed them in the form of "Aeolian Tones," sounds created by wind passing over a wire of the correct diameter and tension, and in the vortices swirling behind the piers of a bridge. In the late 19th and early 20th centuries, John Strutt (Lord Rayleigh) and Theodore von Kármán discovered that strings in a wind move perpendicular to the flow of air.

This interaction between the fluid and the structure occurs because of nonlinear resonance of cylinders or spheres through vortex-shedding lock-in. That is, the period at which vortices form and shed synchronize with the side-to-side motion of the bluff body.

VIVs of circular cylinders occur over a very large range of Reynolds numbers. Experiments have shown that VIVs can be affected by the condition of the cylinder surface, vorticity in the ambient flow, and fluid conditions affecting water viscosity such as salinity and temperature.

VIVs aren't just an idle curiosity. A dramatic example of their power occurred in 1940. A newly completed bridge across the Tacoma Narrows in Washington state known to oscillate and twist during stiff winds shook itself apart after a morning of persistent motions of aboutone meter. An investigation demonstrated that the collapse was due to VIV.

Because of the disruptive power of VIVs, engineers have long been interested in suppressing them in everyday objects such as car antennas, flagpoles, traffic-light posts, buildings, and cooling towers. Hundreds of patents on VIV suppression are based on devices such as helical strakes, large extrusions, fairings, and weathervaning fairings.

Considering the disruptive power of VIVs, it's amazing that until recently, no one has tried to harness their power for something productive. At the University of Michigan, beginning in 2004 and with the help of doctoral student Kamal Raghavan, we showed the feasibility of exploiting VIVs for renewable energy. I filed for several patents in the mid-2000s (the first of which was granted in 2009), and in 2005, I started a company, Vortex Hydro Energy, with backing from the Office of Technology Transfer of the University of Michigan.

Our principal invention was a hydrokinetic energy technology that we named the Vortex Induced Vibration for Aquatic Clean Energy converter (VIVACE). As we envision it, a system would consist of a three-dimensional array of long cylinders, each attached to an electrical or hydrolic power take-off system. Water flowing over the cylinders creates vortices that cause the cylinders to oscillate, and converts some of the horizontal hydrokinetic energy to mechanical energy. The attached power take-off system captures this energy and uses it to turn an electric generator.

VIVACE provides many advantages over conventional water-based power generation. The VIVACE converter doesn't need to impound water behind a dam to create a head. Water is allowed to flow freely over the cylinders. In contrast to hydrokinetic technologies the converter does not use a turbine, making it safer for aquatic life that swim past or through it. Equally important: ocean currents and river flows are much more predictable and reliable than waves, wind, or solar activity. Moreover, VIVACE is scalable from low-watt through gigawatt-sized installations, where the science and engineering remain the same.

A Matter of Density

For a given amount of infrastructure, VIVACE creates an amazing quantity of power. The comparison with wind power is illustrative as both methods capture power from a fluid. It becomes immediately apparent that wind begins with a disadvantage as, compared to flowing water, wind has a low power density. Since water is 830 times denser than air, the power density of a VIV-based device is significantly higher than for a wind turbine. Our experiments show that a VIVACE converter in water flowing at 1.3 meters per second has a power density of 185 watts per cubic meter, about 14,600 times greater than today's state-of-the-art wind farm.

And unlike wind turbines, which require careful location to exploit favorable wind conditions and to avoid unfavorable interactions with humans and wildlife, a VIVACE converter can be placed in almost any type of free-flowing water. The water must be deep enough to permit the safe passage of boats, and to avoid interaction between the wake of the converter and both the surface and the riverbed or seafloor.

Environmental and licensing issues must be worked out, as well as optimizing VIVACE, but we have no doubt that the converter can operate in real-life conditions as expected. Much the way that power from hydroelectric dams transformed the western U.S. during the middle part of the 20th century, we believe VIVACE has the potential to revolutionize the renewable power industry in this century.

[Adapted from "Out of the Vortex," by Michael Bernitsas, University of Michigan, ASME Fellow, for Mechanical Engineering, April 2010.]

Considering amazing disruptive power of VIVs, it's amazing that until recently, no one has tried to harness their power for good.