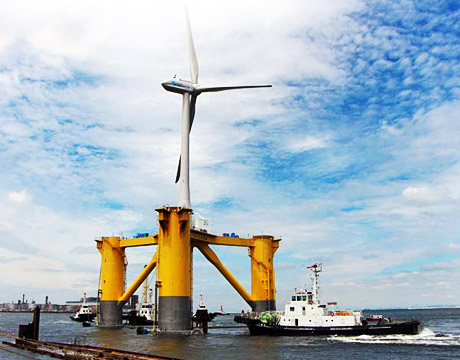 Wind power is one of the fastest growing electricity sources in the United States. According to the U.S. Energy Information Administration, wind turbines accounted for 30 percent of all new generating capacity over the past five years. Most of the activity has been on land, and the advent of a new generation of larger, more efficient batteries that can store energy for longer periods and deliver it to the electric grid when needed promises to optimize production.

But offshore wind turbines also are in play, and the industry is moving farther offshore. Doing so is the result of objections to ocean sitelines from shore, and the realization that wind blows stronger and more steadily at greater distances from shore. But water is deeper at those distances, requiring engineers to design floating structures loosely tethered to the ocean floor, and fixing towers reaching100 meters above the sea to a platform’s base. “The goal is to stay behind the horizon,” said Habib Dagher, director of the University of Maine’s Advanced Structures & Composites Center, and leader of a commercial venture to place a commercial wind turbine founded to a floating hull in the Gulf of Maine. “Plus, the wind regime farther offshore is better.”

In the U.S., Seattle-based Principle Power and DeepWater Wind have teamed to bring Principal Power’s semisubmersible technology to the West Coast. Principal Power has successfully operated a pilot 2-MW project off the coast of Portugal since 2011. Now the team is poised to build an eventual 30-MW array of 6-MW wind turbines 18 miles off of Coos Bay, Oregon. The project has received $47 million from the Dept. of Energy.

Perhaps the most ambitious project is in Japan, where the government has invested $232 million to build what is planned to be an array in deep water off the coast of Fukushima. The 2011 tsunami caused the meltdown of the Fukushima Daichi nuclear plant, leading to a government review of nuclear power that shut down the country’s nuclear power plants. To bolster alternative sources of energy, Japanese engineers are looking at wind turbines placed in waters that drop sharply off the coast.

In 2014, a consortium of Japanese universities, engineers and contractors successfully floated the first two elements of the scheme to a site 20 kilometers offshore, a 2-MW wind turbine mounted on a V-shaped semisubmersible platform and a 66-kV substation mounted on floating spar, a cylindrical buoy-type platform filled with ballast and extending deep beneath the waves for stability.

The project was the first to build a floating substation, needed to minimize power loss. Generally, the longer the distance electric power is transmitted, the greater the loss. The substation raises the power from 22 kV to 66kv, but raised challenges in the design. Project officials from Hitachi Ltd., which had responsibility for the turbine and substation, noted there was not any experience in designing and building high-voltage substation equipment subject to swaying and inclining ocean conditions.

“This left us wondering how we could go about testing it,” wrote Futoshi Asaka, a Hitachi power engineer. “What we ended up doing was to test the 25-MVA transformer inclined at an angle up to 35 degrees to verify its ability to deal with the swaying of the floating platform.”

Hitachi engineers also relied on past experience in seismic design as well as designing robust elements to withstand long-distance travel. For stability, they raised the height of the oil tank, increased the quantity of transformer oil and added more bolts to ensure the core and coils would not be dislodged by swaying.

For the 2-MW wind turbine, Hitachi opted for a downwind configuration rather than a more common upwind version, where the rotor is located upwind of the tower. “We believe that a downwind design will have particular advantages for a wind turbine mounted on a floating platform that is subject to tilting, such as higher generation efficiency” wrote Mitsuru Saeki, Hitachi senior project manager, pointing out that a downwind turbine naturally tracks changes in wind angle when it blows from the side.

There are other methods to efficiently capture the wind. DeepWater Wind’s 6-MW design uses a triangular semi-submersible platform, using three 27.5-meter tall, 10.5-meter-diameter columns tied together with steel members. A wind turbine is to be attached to the top of one column, and each column fitted with a large water entrapment heave plate at its base.

Ballast is pumped into the columns to attain a 20-meter draft. The plates act as dampers to provide stability, which is further enhanced by a hull trim optimization system utilizing an array of instruments that measure ocean currents, wind speed and direction. Data is fed into a control system that pumps ballast water among the columns as needed to provide stability and maintain the mean position of the tower vertical.

“Each solution has its pros and cons,” notes Dagher. “There’s lots of solutions out there. The bottom line is what is most cost-effective at the end of the day.”

For Further Discussion
What we ended up doing was to test the 25-MVA transformer inclined at an angle up to 35 degrees to verify its ability to deal with the swaying of the floating platform. Futoshi Asaka, Hitachi Ltd.