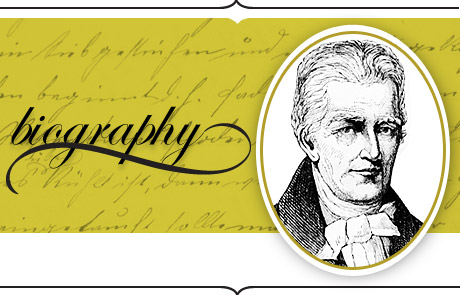 While never achieving his dream of steam-powered land transportation, inventor Oliver Evans (1755-1819) is best known as the inventor of the stationary high-pressure steam engine and a number of innovations in factory automation.

Evans was born in Newport, DE, on September 13, 1755, to a family of Welsh settlers. Ironically, he was born in the same year that Josiah Hornblower was credited with building the first steam engine in the colonies, one state north of Newport in Belleville, NJ. At age 16, Evans became an apprentice to a wheelwright, learning the mechanical skills required for wagonmaking. Later, like many young men of his day, he worked in a mill, where he was hired to produce the cards used for combing wool, a process used to organize the wool fibers so they could be more easily processed down the line. Evans soon tired of the slow and repetitive work and designed his first invention: a machine designed to automatically produce card teeth at the unthinkable rate of 1,500 per minute.

In 1782, Evans and two of his brothers purchased part of their father's farm in Red Clay Creek, DE, to build a grain mill. At the time, the process of grinding grain and processing wheat into flour was a time consuming and unsanitary method. The process was extremely hand-labor intensive and the flour was often dirty as a result. Evans's idea was to harness the energy of a water-wheel to connect the milling process into one continuous system, moving the grain and flower both horizontally and vertically through the mill automatically without hand labor. Over the course of seven years, he developed and perfected five machines that, together, formed a production line that enabled a single worker to perform the work of five, processing 300 bushels of grain per hour. His efforts were recognized by George Washington and Thomas Jefferson, who both commissioned Evans to install a similar system in their mills.

Shortly thereafter, Evans turned his attention to the steam engine. It is said that his interest in steam power was piqued by a story told by his brother of how the son of a local blacksmith had discharged a gun with a bang louder than gunpowder by putting in water, ramming down wadding, and inserting the close end of the gun into the smith's fire. In an era in which only large, heavy, low-pressure steam engines were thought to be practical, Evans considered that by applying high pressure steam directly to a piston would increase efficiency and enable the engine to be made much smaller, and thus, have more practical applications, such as a source of power for wagons. In 1786, he applied to the Pennsylvania legislature for exclusive rights to build steam carriages to move over public roads. After denying his initial request, the Pennsylvania legislature granted Evans the rights to design a steam-propelled carriage. Unfortunately, he was unsuccessful in generating enough financing to realize his dream.

A few years later, working off a patent granted in 1789, Evans produced an amphibious steam-powered wagon in 1804 called the Oruktor Amphibilos, or "amphibious Digger," that was built on commission from the Philadelphia Board of Health. The vehicle was a 17-ton, high-pressure steam-powered dredge designed to deepen the Delaware River dock area. In doing so, he was able to finally demonstrate the utility of his high-pressure steam engine.

In 1807, Evans founded the Mars Iron Works in Philadelphia and opened another factory in Pittsburgh in 1811 to build customized steam engines and boilers for mills, steamboats, and factories.

Evans had great visions for his high-pressure steam engine, and in 1812, 17 years before the practical use of the locomotive began, he wrote:

"The time will come when people will travel in stages moved by steam engines from one city to another almost as fast as birds fly - fifteen to twenty miles an hour. Passing through the air with such velocity - changing the scenes in such rapid succession - will be the most exhilarating, delightful exercise. A carriage will set out from Washington in the morning, and the passengers will breakfast at Baltimore, dine in Philadelphia, and sup at New York the same day."

Since there was no patent protection during the 1780s, Evans, like other inventors of the time, usually received no money for use of his ideas by others. Even after the U.S. Patent Office was established in 1790, he engaged in continuing battles to collect royalties on his patents and devoted a great deal of his time to filing patents, patent extensions, and enforcement of his patents.

Evans died in New York City on April 15, 1819. It is believed that he was responsible for 80 inventions over the course of his lifetime.

Tom Ricci is an independent writer.

He developed and perfected five machines that, together, formed what was akin to a production line that enabled a single worker to perform the work of five, processing 300 bushels of grain per hour.