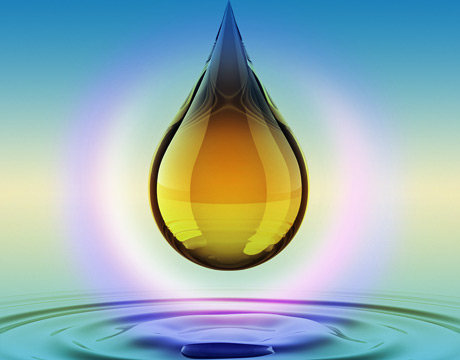 Oil and Water Don’t Mix Thanks to UV Light

Gareth McKinley, school of engineering professor of teaching innovation at MIT, was part of a team fascinated with trying to come up with superior ways to separate oil from water, a function that is critical in the oil and petroleum industry.

Now he believes they’ve found a method that just might be a game-changer for oil rigs and beyond, with light – ultraviolet to be specific – paving the way.

“When you produce oil from reservoirs that are not brand new you typically have to do enhanced oil recovery,” McKinley explains, describing the ways companies extract as much of the oil from a field as possible. “One of the ways is pushing vast amounts of water underground. A mature reservoir might produce five to seven gallons of water for every gallon of oil you’d produce. It doesn’t come out nicely but as emulsifier mixture, like taking vinaigrette and shaking it up—then gravity comes in and oil rises and water sinks.”

“We used fine mesh for one phase where you go through and another phase where it’s repelled. You can either let water through and repel oil or vice versa. You lock holes in mesh over time and end up eventually with clogging. Our paper thinks about trying to make surfaces that not only let one phase through and prevent another phase, but if they get an impurity or clogging can you use radiating light to clean it or get rid of the impurity?”

Ultraviolet light is the highest radiation energy you can think of that is easy to access, McKinley says. “So if you put UV on something in sterilized water it can be used to clean surfaces,” he says. “The novel thing we did is to use photocatalysis—the photocatalytic effect. To make it more efficient, we used nanoparticles of titania. What we were using was TiO2 to interact with UV light and produce free radicals which would degrade the oil on the surface. Now we would call this multifunctional membrane—you separate oil and water but also, if you shine light on it, then it would degrade oil and clean itself.”

The problem with titania is that it only works well with the very highest energy part of the sun spectrum and only four percent of sunlight is there, according to McKinley. “What we set out to do is figure out the way to harness the rest of the solar spectrum,” he says. “The way we did this was by using dye to absorb blue light or the higher energy part of spectrum and emit it as a lower part of the spectrum. So if we see red dye it’s because it is absorbing all of the blue light and emitting in the red part of spectrum.

Separate oil and water and oil can be used eventually in a refinery and water can be reused to get more oil out of the ground, he offers. “That’s a big application here but a side part of it because now you have a surface that responds to light,” he says.

Also, if they shine light on one side of the drop and not on the other side, it changes the property of the drop. “If we change that, we show on the side with the lower contact angle that there is a pulling force that pulls force in that direction," he says."By doing this, we can shine light on that surface and the drop will move in that direction now. That means we have a way to do this without even touching a surface, so, on a fundamental science level, we can put a light on the surface and move droplets around. The possibilities from it are if you have a chemical reaction then you can use each droplet as a chemical reactor but we were interested because we want to coalesce drops—we want them to merge together.”

Finally, McKinley says it also allows for another kind of water to be in the fold. “When you’re talking about being in sea water, it’s a real challenge to find a system that worked with it,” he says. “It was a great moment to figure out the right dye to use to make it work when one phase is seawater and another phase is oil.”

For Further Discussion
Now we would call this multifunctional membrane—you separate oil and water but also, if you shine light on it, then it would degrade oil and clean itself.Prof. Gareth McKinley, MIT