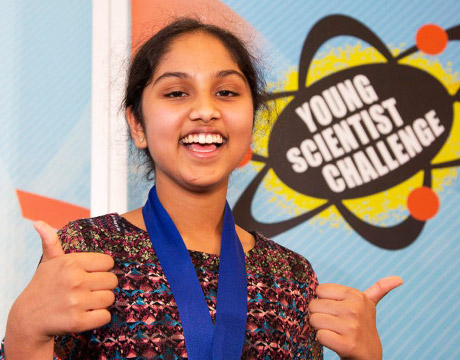 Fourteen-year-old Maanasa Mendu of Mason, OH, had a vision of supplying people with energy on demand, without the need for a great deal of cash to pay for it. Putting that thought into action, she created a device called “Harvest” at the cost of a few dollars —and won the Discovery Education 3M Young Scientist Challenge, when she was still 13.

“I think it was around seventh grade and I just saw this piezoelectric news story,” she says. The piece was on a Japan railway station using piezoelectric walkways. “I thought, this is a perfect solution for our energy crisis. Then why is it not being used currently?”

The device evolved. When Mendu first started, the goal was to use piezoelectric effect to harvest low wind speeds and, as she progressed in the Young Scientist Competition, the decision was made to further integrate solar energy harvesting.

Among the various parts of Harvest, the stem portion is made from piezoelectric materials, the main part of the leaf is composed of organic photovoltaic material, and the invention also contains a capacitor unit.

She started off testing in a homemade setup, building a wind tunnel and conducting the test there for the piezoelectric portion. Then, for the outside environment, Mendu mainly used her backyard and other parts of her neighborhood while keeping a log of the environmental conditions there.

The electrical outputs have been more than encouraging but improvements may still be on the horizon. She wants to work on the fact that the present material, in her view, has a very low ability when it comes to converting mechanical energy into electrical energy. She’s even open to possibly utilizing a thermal electric generator. “I also have to do a lot more testing to see the practicality of my device,” she says. “Conducting in many different environments.”

Up to the Challenge

When Mendu found out she had won the Discovery Education 3M Young Scientist Challenge, it was a thrill, to say the least. “It was actually really surprising,” she says. “After meeting the amazing finalists, I was blown away by some of their projects. They were so good so I thought everyone had a fair chance of winning. I was pretty surprised when they called my name.”

But despite its recognition, she isn’t just limiting herself to the Harvest invention. She’s presently at work on another, one that is out to optimize piezoelectric energy harvesting by using aeroelastic flutter.

She says her support team at home has made it easier to embark on her journey as an inventor. “My family was a pretty important part and they were basically my cheerleaders during the entire process and they’ve always been very optimistic,” she says. “During the days when my device didn’t work or when I needed some help with the presentation part, they all were really amazing, including my mom, dad, and little sister.”

I thought, this is a perfect solution for our energy crisis. Then why is it not being used currently?Maanasa Mendu, Discovery Education 3M Young Scientist Challenge winner