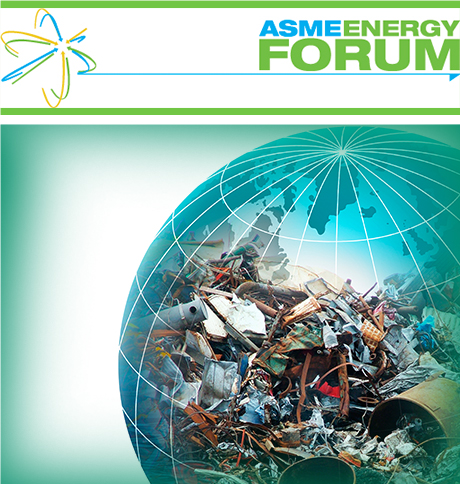 Municipal solid waste (MSW) is a vast, renewable resource that contains high amounts of energy—the trick is designing an extraction system that is efficient and cost-effective. This kind of sustainable waste management—typically called waste-to-energy (WTE)—is critical for reducing our dependence on fossil fuels and non-renewable materials and improving our environment.

The standard WTE approach is incineration—after materials are removed that interfere with the combustion process, the remaining MSW is transported to the combustion chamber, where it is burned, creating hot gases. These by-products are collected in the boiler section above the combustion chamber. Here the water is converted to steam, which powers an electric generator. The cooled combustion gases are then passed through pollution control devices before being released to the atmosphere.

Today in the U.S. 87 WTE facilities produce a total annual generation capacity of 2.6 GW of electricity. Most of these aging facilities were built in the mid-1980s and early 1990s. As stricter emissions requirements were enacted that required more expensive pollution control equipment, new WTE projects dropped off. Energy prices and landfill disposal costs also fell in the mid-1990s, making WTE plants even less cost-competitive. Even though WTE facilities, when outfitted with top-notch air pollution control equipment, produced significantly cleaner electricity compared to coal or oil, no new WTE capacity was added in the U.S from the mid-1990s to mid-2000s. WTE simply could not compete against landfills, where Americans continue to send most of their non-recycled waste today.

This, however, is starting to change as improvements in WTE technologies—especially gasification and solid recovered fuels—gain traction.

New technological advances in gasification of MSW are making this process more affordable. Gasification is the partial oxidation of the organic content in the MSW feedstock that produces a H2CO-containing syngas. The process falls between pyrolysis (no air, endothermic process) and combustion (excess air, highly exothermic process). The reduced excess air in gasification means smaller equipment can be used that produces higher energy and lower emissions.

This process is, however, technically and economically challenging—success is dependent on the design of the process and the targeted use of syngas. For example, gasification processes developed for coal or biomass require significant pre-processing of MSW, such as moving bed, fluidized bed, and entrained flow reactor methods.

“The heating value and the purity of the syngas depend on many parameters,” indicated Steve Goff, vice president of research and development for Covanta Energy in Morristown, NJ. “These include gasification temperature, air or oxygen, other reactants, other energy inputs, gasifier design, and the control system.”

Covanta Energy has developed and commercialized a gasification process called Cleergas for unprocessed, post-recycled MSW. An advanced control system controls the movement of waste through the system, as well as the mixing of the waste with air to produce a stable syngas for subsequent combustion and the recovery of renewable energy. Nitrogen oxide (NOx) emissions average about 50 ppm and CO levels are typically about 20 ppm or less. Less particulate carryover into the boiler also reduces fouling, saving on maintenance costs.

Another WTE approach is converting MSW into solid recovered fuels (SRFs)—blends of nonrecycled waste that are engineered into a fuel-pellet feedstock. This technology is especially suitable for plastics that are difficult to recycle, or that decompose slowly in landfills—like baby diapers.

“Although diapers will almost certainly be an interesting archeological find centuries from now, today they could make a great fuel,” said Michael E. Webber, co-director of the Clean Energy Incubator and associate professor of mechanical engineering at the University of Texas-Austin. “That invites the broader question of how many other non-recycled plastics could be turned into fuels, instead of wasted in landfills.”

To explore this further, Webber’s research team created SRF pellets, combining selected plastic and paper and converting the material into solid pellets. The SRF product was then co-fired with coal in a large-scale test burn in a cement kiln.

Results showed that the SRFs had a predictable energy content of about 25 million Btu per ton. Bituminous coal has almost exactly the same energy density, leading to a nearly one-to-one displacement opportunity. The SRFs were also 40 percent more energy-dense than sub-bituminous coals and 80 percent more so than lignite. When the whole production, transportation, and combustion life cycle of the SRFs is considered, large fossil fuel energy savings can be realized. On a larger scale, when the magnitude of the waste residue stream that flows through the U.S. every day is considered, the potential for energy savings and greenhouse gas reductions is immense.

“Waste has been used for decades to generate, heat, electricity, and biogas, but generating liquids has been too costly,” Webber said. “New technologies—such as SRF conversion—are bringing down the price, which means we might be able to use unrecycled plastics to displace petroleum. This also helps divert waste from landfills while avoiding fossil fuel consumption.”

Register here for a free webinar on waste-to-energy technology.

Although diapers will almost certainly be an interesting archeological find centuries from now, today they could make a great fuel.Michael E. Webber, University of Texas-Austin