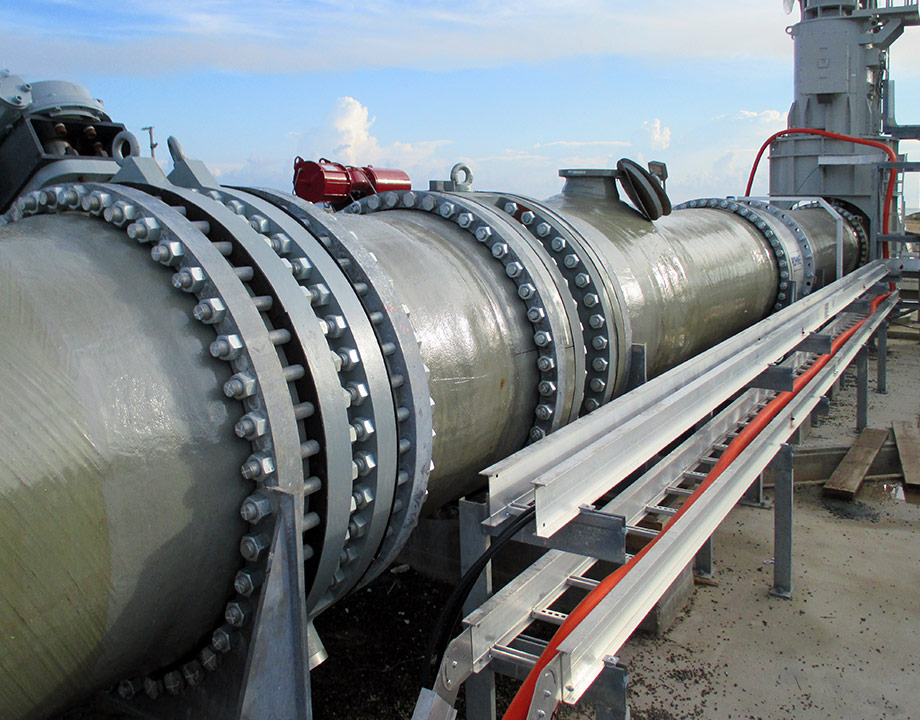 Metal pipes have dominated the pressure piping market since its inception. Over the last 10 years, however, innovations in material science have resulted in plastic pipes that can support high pressures and temperatures. Many companies have started to shift from metal to plastic for several high-pressure applications across a range of industries.

“Metallic pipelines have served the industry well due to their higher strength,” said Charles Henley, chief engineer for piping and material applications for construction services company Kiewit in Lenexa, Kans. “Nonmetallic pipelines, however, have the advantage of being corrosion-resistant, lightweight, and cost-effective. Continued developments and improvements in recent years for nonmetallic materials have allowed nonmetallic pressure piping systems to mature to the point where they are a viable and even preferred material of choice, especially for the oil and gas pipeline infrastructure.”

Plastic pipes are also thinner and more flexible. In fact, small thermoplastic pipes can be delivered on spools and unwound as they are installed. This makes them easier to handle, saving time and reducing labor costs. 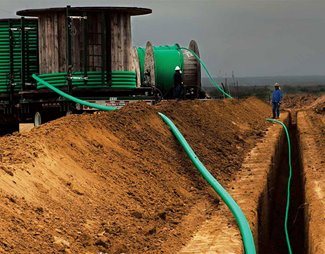 Spoolable plastic high-pressure pipe is much faster to install than steel. Image: National Oilwell Varco.
“Some plastic pipe materials have advantages with flexibility over metal pipe, especially in areas where seismic activity or settlement are concerns,” said Don McGriff, director of custom fabrication for ISCO Industries in Huntsville, Alabama. “Plastics can be installed and welded and joined more efficiently than metals in some cases, and technology is improving the efficiency and the reliability of personnel and the quality of the joining.”

Not surprisingly, more companies are opting for durable, cost-effective plastic in industries once dominated by metallic piping, such as utilities and oil and gas production. Still, plastic pressure systems technology is relatively new and their properties and installation methods differ from metal piping. As a result,  many engineers are uncomfortable specifying plastic pressure pipe.

Because of these operational advantages, nonmetallic piping—a rapidly growing industry with over 600 U.S. manufacturers—is expanding into areas previously dominated by metallic piping, such as utilities and oil and gas production.

You May Also Like: How Espresso Machines Work: The Engineering Inside

Other standards for nonmetallic piping already exist, both from ASME and other code-writing organizations. ASME’s new publications, however, are the first comprehensive set of standards to address nonmetallic materials pressure piping as a system rather than as individual components. They cover the full spectrum of requirements, from materials, design, and fabrication to installation, fusing or joining, quality control, and service limitations.

NM.1 and NM.2 set out requirements for the design, materials, fabrication, joining, erection, installation, examination, testing, and inspection of thermoplastic and glass fiber-reinforced thermoset (FRP) piping systems, respectively. They cover pressures above and below atmospheric, and continuous and short-term operating temperature limits and pressure ranges over a given time interval. NM.3 provides specifications, allowable stress levels, and physical properties for nonmetallic materials.

“These standards provide a single set of construction requirements that provide more consistent and high-quality installations,” Henley said. “They provide a single-point resource for owners, designers, manufacturers, contractors, and inspectors to go for requirements developed solely for pressure piping systems made from nonmetallic materials.”

Contractors have traditionally built oil and gas pipelines from metal, due to the high pressures and temperatures experienced in these environments. Metal pipes, however, are susceptible to corrosion which can limit their expected lifespan. Yet many of today’s pipelines have remained in service longer, and some are nearly 50 years old, by implementing an active inspection and maintenance program. Even with such an extensive O&M program, they are prone to pipe leaks, which can cause environmental contamination and hurt industry’s image.

Repairing or replacing those metal pipelines is expensive and time-consuming. With the new ASME NPPS guidance, more companies will have the knowledge and confidence to move ahead and replace aging metal pipes with plastic ones.

Another key sector for nonmetallic pressure piping systems is electric and gas distribution. According to The American Gas Association, utilities spend more than $26 billion annually to enhance the safety and performance of natural gas distribution and transmission systems. Over the past decade, gas distributors built an average of 26,600 miles of plastic lines per year. This is expected to increase over the next five years as oil and gas companies deepen their investment in core infrastructure to support growing demand.


ASME’s new standards were developed by subject matter experts whose careers have been spent designing nonmetallic pressure piping systems. The standards combine their best practices and lessons learned into one standard methodology. 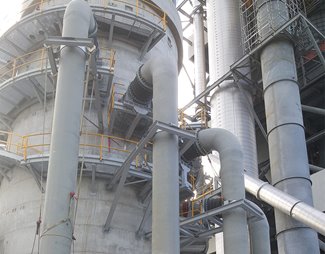 “Sometimes these differences can cause some confusion when an owner requires the use of two different codes for one project,” said Constance Eastman, lead field engineer with Kiewit in Overland Park, Kan. “The new standard examined all the current ASME codes to create one new standard that resides in one location.”

For Eastman, one of the standard’s biggest differences involves detailed requirements for the use of solvent fusion to weld pipes together and the technicians who perform this task.

The standards also provide detailed guidelines for inspection, she said: “Since the use of non-metallics for pressure piping systems is still relatively new, there are not a lot of requirements for an inspector. The biggest difference for inspection, examination, and testing is that the new standard calls for specific certification requirements for an owner’s inspector.”

For D. Bruce Hebb, vice president of engineering for RPS Composites in Mahone Bay, Nova Scotia, one of the biggest benefits of the new NPPS standards is that they will de-mystify FRP piping.

“Engineers receive very little exposure during their formal training to plastics in general, and composites in particular,” said Hebb. “As a result, they are often reluctant to specify fiber-reinforced plastics for their piping materials, even though it might be the material of choice for the environment. The strength of the new ASME standards will allow them to better understand the material and give them the confidence to select the material when the application warrants it.”

For Eastman, the new standards ensure that all current and future operators are qualified to perform their scope of work. “Whether they are fusing HDPE or solvent-fusing PVC pipe, it gives us the ability to create better processes and to perform repairs when they are necessary,” she said.

Also, McGriff noted, the new ASME standards will make it easier to add new materials to ASME standards more efficiently than in the past. “It provides a single point at which to begin the process,” he said. “As other codes and standards incorporate the new nonmetallic materials, there will be a single source for reference capable in providing all the required information related to properties, design, installation, and quality requirements.”

Public Health is a Job for Engineers