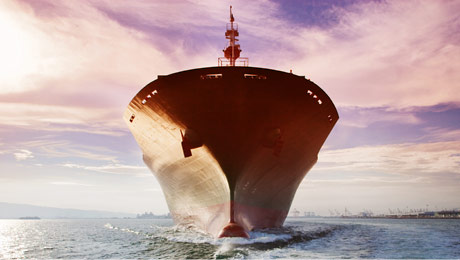 In the U.S., the Environmental Protection Agency (EPA) monitors air quality near port cities (and other locations) and has determined that levels of ground-level ozone in Houston, TX, and Galveston, TX are above the ambient threshold, requiring that they be lowered. To reduce these levels, the EPA regulates emissions of ozone precursors, one of which is oxides of nitrogen (NOx).

Marine engine emissions are a large contributor to NOx levels, and when combined with rail and road traffic in a concentrated area, the ports become a major source of emissions. Many diesel engines in ship fleets aren't replaced for 20 or 30 years, delaying the implementation of newer clean diesel engine technologies.

Through a $350,000 grant from the Texas Environmental Research Consortium, and funding by the Texas Commission on Environmental Quality, beginning in 2008, researchers at West Virginia University (WVU), along with environmental consulting firm M.J. Bradley & Associates, LLC, developed a new wet scrubbing system for NOx as a retrofit for diesel marine engines that can reduce emissions at ports. Scrubbing pollutants from exhaust is not new, but scrubbing applied to mobile NOx sources is.

Scrubbing as a technology has been used for decades to capture oxides of sulfur (SOx) in stationary emission sources such as power and chemical plants, and on huge ocean-going marine vessels in Europe, whose heavy residual fuel contains large amounts of sulfur.

On large ships such as those with the 1,000-1,500 hp, tug-boat sized engines targeted in this study, SOx scrubbing captures sulfur from engine exhaust, creating dilute sulfuric acid as a byproduct. Primitive scrubbers would release it overboard. Modern systems carry additional chemical reagents on-board, such as calcium hydroxide, to react with the acid, like a mobile chemical plant, which is a costly option. Large ships could use low-sulfur diesel, but refining costs are also substantial due to the high volumes used.

SOx scrubbing is generally not needed for smaller harbor marine engines at ports in the United States since the distillate diesel fuel used in these engines has much lower sulfur than in residual fuels of ocean going ships. Also, the use of ultra low-sulfur diesel will be required by the EPA in 2012.

WVU and M.J. Bradley expanded the SOx scrubbing concept to develop a new technology involving two stages. First, nitrogen oxide (NO) within the engine exhaust is converted to nitrogen dioxide (NO2) and partially cooled with seawater, since the NOx absorption improves at lower temperatures. The cooled gas containing more soluble NOx species is sent to a conventional packed wet-bed scrubbing column, producing a weak nitric acid byproduct that is stabilized.

Next, the acid is thermally decomposed and reacted with a small amount of on-board diesel fuel across an automotive style reducing catalyst, forming nitrogen and water vapor, which are discharged as harmless gasses. No scrubbing liquid is dumped overboard.

Only about 1% of additional diesel fuel is needed to react with the small NOx volumes captured, so this technology minimally impacts fuel consumption. No additional reagents are needed other than the same common catalyst that removes NOx from gasoline vehicle exhaust.

"Since temperatures of around 256 °C are required to complete the acid destruction reaction, and catalyst action begins around 250 °C, the sealed destruction vessel is made from stainless steel to avoid corrosion from the nitric acid during heating," says WVU graduate student Louise Ayer.

The WVU team designed, built, and after design iterations, demonstrated a system that met the target goal of reducing NOx by 40% or morein lab tests on a 12-L, 400-hp diesel engine. Based on modeling, Nigel Clark, mechanical & aerospace engineering professor at WVU and his group, believe the system can scale to larger engines and the absorption can be increased with further optimization.

"The column in the current design is about nine feet tall. Future optimized designs could be as compact as a refrigerator," says Clark. With a lower temperature and more NO2, the scrubbing process improves, he says.

A competing technology called Selective Catalytic Reduction, used in trucks built after 2010, uses injected ammonia or urea across a catalyst to remove NOx. The WVU/M.J. Bradley system uses an oxidizing catalyst and diesel particulate filter system to convert about 60-80% of exhaust NO to NO2 before scrubbing begins, and doesn't require end users to carry multiple reagents on-board, making it a potentially more attractive retrofit option in the long run, its designers believe.

The next step for Clark's group will be to optimize the design in concert with a field demonstration.

The column in the current design is about nine feet tall. Future optimized designs could be as compact as a refrigerator.Nigel Clark, mechanical & aerospace engineering professor, West Virginia University