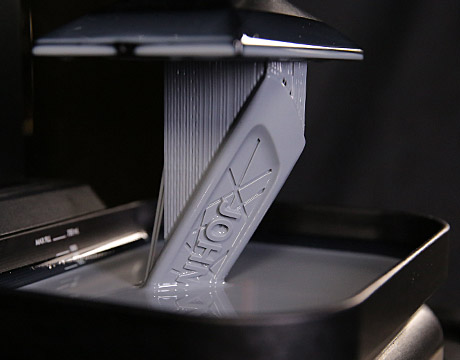 We have all heard of 3D printing by now. This revolutionary process continues to develop and get better, including larger sizes, faster speeds, and sometimes even production-ready parts. But 3D printed parts can still have quality issues, especially with inconsistent mechanical properties.

A new technology that has recently hit the market promises to be even more disruptive than 3D printing—Carbon3D’s “CLIP” technology. Short for “continuous liquid interface production,” CLIP is a photochemical process that actually pulls a complete, solid product from a melt of plastic material, with mechanical properties, resolution, and surface finishes that are very similar to injection-molded parts.

CLIP is a variation of the stereolithography process that uses light and oxygen to rapidly produce objects from a pool of resin. It essentially grows solid structures out of a liquid bath. “We have been able to demonstrate the continuous generation of monolithic polymeric parts up to tens of centimeters in size with feature resolution below 100 micrometers,” says Alexander Ermoshkin, CTO and co-founder of Carbon3D.

The key to the process is the creation of an oxygen-containing “dead zone” between the solid part and the liquid precursor where solidification cannot occur. The dead zone is only a few tens of micrometers thick. A continuous sequence of UV images is fired from a digital light-processing imaging unit in a precise pattern dictated by the object’s 3D file. Above the dead zone, the curing part is continuously drawn out of the resin bath, thereby creating suction forces that constantly renew reactive liquid resin.

“Continuous liquid interface production is achieved with an oxygen-permeable window below the ultraviolet image projection plane, which creates the ‘dead zone’ where photopolymerization is inhibited between the window and the polymerizing part,” continues Ermoshkin. “Complex solid parts can be drawn out of the resin at rates of hundreds of millimeters per hour. These print speeds allow parts to be produced in minutes instead of hours.”

The part is then subjected to a secondary thermal curing process that sets off a secondary chemical reaction that strengthens the materials, resulting in high-resolution parts with engineering-grade mechanical properties. Parts can be made from seven proprietary resins, including rigid polyurethane, flexible polyurethane, elastomeric polyurethane, and cyanate ester. These incorporate UV-blockers and pigments to protect them from light degradation.

Over the last year, Carbon3D has been working with selected customers in a variety of industries, such as automotive, aerospace, medical, and athletic apparel. Companies include Delphi, a high-tech manufacturing firm in Warren, Ohio, that makes parts for several industries, including automotive and electronics. Delphi sees great potential in the CLIP process—not only for improving operational efficiencies, shortening prototyping and production timelines, and saving money, but also the opportunity to expand design options.

“Engineers can start to redesign parts from the ground up, without being constrained by the design rules associated with traditional manufacturing technologies,” says Jerry Rhinehart, Delphi’s manager of additive manufacturing development. “They can consider lighter weight parts using internal mesh structures, single assembly parts that will better address sealing needs and reduce overall complexity of product assembly, and ultimately decrease part and product failure modes because of this new design freedom.”

“We’re excited to unveil our M1 machine and ground-breaking materials,” adds Joseph DeSimone, CEO and co-founder of Carbon3D. “This technology lays the groundwork for addressing major gaps in additive manufacturing as we work with our customers to continually innovate and push the boundaries of product design and production.”

Complex solid parts can be drawn out of the resin at rates of hundreds of millimeters per hour. These print speeds allow parts to be produced in minutes instead of hours.Alexander Ermoshkin, CTO and co-founder, Carbon3D