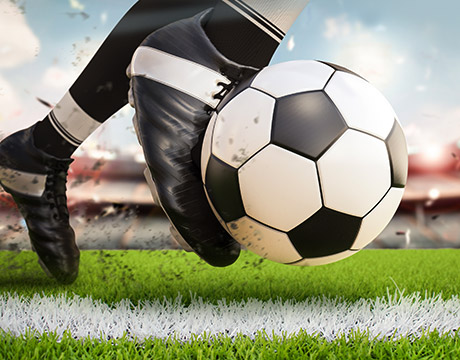 Artificial turf was developed by chemists at Monsanto in the mid-1960s. It was first known as AstroTurf after it was installed as the sports surface at the Houston Astrodome in 1966. Now, 50 years later, more than 11,000 synthetic turf athletic fields are used at schools, colleges, parks, and professional stadiums across the U.S., according to the Synthetic Turf Council.

Synthetic playing fields are often preferred over natural grass because they are easier to maintain, longer-lasting, and can be used in a variety of weather conditions. The padded surface also helps reduce the likelihood of impact injuries. One of the most popular artificial turf fields today is called an “infill” system, where the top layer of artificial fibers overlies a sequence of shock-absorbing pad, leveling layer, drainage layer, and natural compacted subgrade. The fiber layer on top is partially infilled with tiny granules of rubber, sand, or other materials (“crumb”) that settle at the base of the turf fibers. The particles help support the turf pile, keeping the fibers upright. The infill and the underlying shock-absorbing pad also reduce the possibility of injury when players fall.

Thanks to advances in fiber design, advanced materials, and manufacturing techniques, the newest generation of synthetic blades can be made to match the color, texture, and bounce of the grass that grows naturally in the area.  Not only does the artificial turf look natural, it looks and feels like it was “grown” locally. As a result, “artificial turf is rapidly replacing grass as the surface of choice for many sports facilities due to the many advantages that they bring—both from artificial turfs and hybrid versions, where a hybrid grass pitch features 100 percent natural sport grass reinforced by artificial turf fibers,” writes Randy B. Hecht in a recent blog for Oerlikon, a Swiss-based global technology group.

Field safety is also enhanced by better designs of the grass fibers. Different material chemistries and blade shapes can impact temperature, color, bounce, and other performance characteristics. For example, S-shaped blades reflect sunlight evenly, so the turf maintains a uniform color on a sunny day. Temperature of the playing surface is a concern for athletes. In hot weather, artificial turf can reach temperatures as high as 180 degrees F. W-shaped blades diffuse sunlight and heat through the curves of its blades, lowering the overall temperature of the turf up to 15 degrees. Hollow blades can further reduce temperature levels on the field.

“Our [blade] is designed to make turf stand up straighter and taller than other grasses, making it look realistically tall,” states Global Syn-Turf, a major provider of artificial turf, on its website. “As with naturally growing grass, M-shaped blades reflect light at various angles preventing water, or mirror effects, from flat even surfaces.”

Recent concerns have been raised about the health risks of crumb rubber infill, the most common infill material used in artificial turf fields. Some reports indicate the pulverized rubber contains carcinogenic compounds and can be ingested or inhaled into the body. “More healthy” options for crumb rubber include:

The top priority for artificial surfaces is player safety, especially reducing injuries from falling. Synthetic turf systems have been modified to include higher pile heights and deeper granular infill materials in an effort to create a softer surface. Other factors that can improve softness and field performance include type of plastic, blade design, density, and pattern, design parameters that impact bounce and roll resistance, and shock-layer systems.

Perhaps the most intriguing development in shock absorption technology for artificial fields is coming from the automotive industry. Viconic Sporting, Dearborn, MI, is experimenting with a material that is used by the automotive industry to reduce the impact of crashes. Viconic’s promising new impact-absorbing layer, which looks like sturdy bubble wrap, is made from resilient thermoplastic urethane material that buckles on impact. However, the energy absorbers (“bubbles”) do not pop upon impact. “Instead, they crush down to about 90 percent of their height, absorbing the energy of the player’s fall, and then recover to their natural shape and are ready for the next impact,” says Joel Cormier, Viconic’s director of development engineering. “A low-level impact on a playing surface will likely not engage the energy absorbers. With a high-energy impact, these structures collapse and buckle in a very efficient manner to absorb the impact energy.”

The shock pad is installed underneath the artificial turf and snaps together for easy assembly. “The goal is to reduce the forces that a player experiences from impact with the playing surface,” says Cormier. “If we can reduce injury in the automotive field, hopefully we can do the same thing for synthetic turf. We see potential for the product to be used everywhere, from youth soccer to the NFL.”

The goal is to reduce the forces that a player experiences from impact with the playing surface. We see potential for the product to be used everywhere, from youth soccer to the NFL. Joel Cormier, Viconic