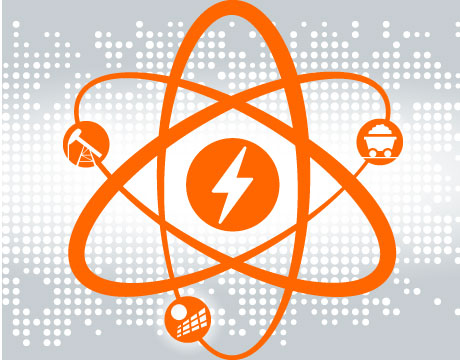 Even though challenges in the nuclear power industry often seem to be as much about politics as science, engineers continue to forge ahead with new ideas about hybrid power plants, combining nuclear with other energy sources.

With the growing interest in renewables as a way to help reduce the carbon footprint, some of the thinking is focused on using renewables to meet spikes in demand over baseload power supplied by nuclear, just as might be done with fossil fuel plants. While renewables can be a good fit for this purpose since they can be easily ramped up and down — unlike typical baseload plants and because they produce power at relatively low cost like nuclear — the disadvantage is the unpredictability of output if there is not enough wind or sun at the time the power is needed.

Ahira Tokuhiro, professor of mechanical and nuclear engineering, University of Idaho, says, “What makes the most sense [in a hybrid system] depends on the objective” as well as the location, regional perception of the benefit, and public acceptance of certain energy sources. The key, he notes, is “an intelligent control system. There is some capability now, but with the computer technology we have, what’s really exciting is that we can do it better.”

With such technology that connects, manages, and controls the systems, any combination of systems — whether a matchup of nuclear with solar, wind, geothermal, or hydro power — is possible, he says. “It doesn’t even have to be a large nuclear power plant; it can be a small reactor if we don’t like large nuclear power plants, which seems to be the case.”

Tokuhiro also points out that a hybrid system can be developed at various scales: a large system for a big city or a smaller one for a little town. In fact, a lot of recent work has been on smaller reactors, not only because they may be more acceptable politically but also because of they require less financing.

Taking another approach, Prof. Charles Forsberg, a research scientist in MIT’s department of nuclear science and engineering, has come up with a different kind of solution. In a paper published in the November 2013 issue of the journal Energy Policy, Forsberg suggests that a nuclear plant be paired with either an artificial geothermal storage system, a hydrogen production plant, or a shale-oil recovery operation to divert excess power as a “dispatchable” source of electricity to balance production and demand.

Although perhaps not readily apparent, even the shale-oil matchup would help curb greenhouse gas emissions because the nuclear plant can heat oil shale when demand for electricity is low since the heating can be done sporadically. This would replace the burning of fossil fuels to heat the shale, which generates higher emissions.

The world’s largest shale oil deposits, which have the lowest carbon footprint of any source of liquid fossil fuel, are concentrated in the western part of the U.S., according to Forsberg. When shale oil, which to date has not been used as a source of petroleum, is heated, the oil can be pumped out by conventional means.

As the university lead for hybrid nuclear energy systems at the Idaho National Laboratory’s Institute for Nuclear Energy, Science & Technology, Forsberg is at the leading edge of research. Nuclear hybrid energy systems is one of the five Centers of Research and Education that make up the institute, and each summer the nation’s leading nuclear scientists and engineers gather in Idaho Falls to share knowledge about the latest work in hybrid systems to achieve clean energy objectives.

According to Michael F. Keller, president & CEO of Hybrid Power Technologies, hybrids have the savings potential of $30 billion for Americans annually in reduced power costs and a reduction in greenhouse gas emissions of more than 15 percent.

For Further Discussion
The key [to a hybrid nuclear energy system] is an intelligent control system.Prof. Ahira Tokuhiro, University of Idaho