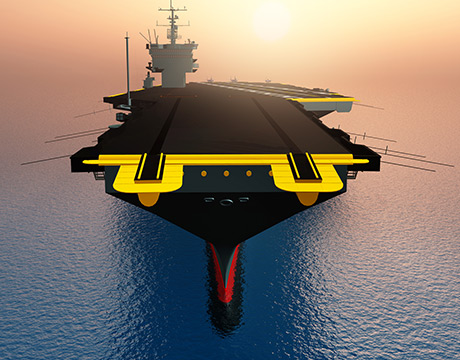 It is a beginning. The U.S. Navy builds and sails some of the world’s largest and most powerful vessels and those vessels depend on a wide range of advanced systems and machinery to operate. Now, the Navy is moving toward advanced manufacturing of some of the smallest parts of the biggest ships, approving 3D printing of a drain strainer for a steam line on the aircraft carrier USS Harry S Truman.

Shipbuilders say it is the first step – one that was six years in the making - toward integrating additive manufacturing into the supply chain.

“The technology is disruptive, it is new, and it is growing quickly,” said John Ralls, an engineering manager focusing on additive manufacturing for Newport News Shipbuilding division of Huntington Ingalls Industries. “This is the first approval, the first domino to fall.” ASME.org’s Editor’s Pick: Fight Climate Change, Build the Wall! Top Story: Using the Eyes of Killer Shrimp to Design a Super Camera Naval Sea Systems Commandlast year approved 3D printing of the part after a five- to six-year effort by HII to fully test and establish technical standards for fabrication. The strainer will be installed for a one-year test period. Ralls, while excited about the technology, said filling the knowledge gaps in the absence or limited development of 3D printing standards was a necessary building block in adoption of the technology.

“We took about five years to address the knowledge gaps,” he said. “There was very little information. Which are the right standards to apply? There was a strong focus on technological rigor.”

“We had to learn about our own unique maritime requirements,” he said. “Shipbuilding has a host of different standards. One of the key challenges was to demonstrate repeatability and quality control while printing a part.”

To do that, the developers relied on sensors developed by 3D Systems that can be placed directly into each layer of the printed object.

“We can track exactly how the part is being built, archive it and report every detail,” Orringer said. “We can conduct inspections on each layer while it is being built.”

While the strainer may be small, “It represents the first step in the process toward broader application,” Ralls said. “Technical standards are not yet in place. We laid that foundation for future work.”

There’s a lot of future work at Newport News. Ralls notes the shipyard has some of the “most complex machinery on the planet” and the list of manufacturers and suppliers is long. One of the goals is to provide leadership to suppliers and accelerate the adoption of additive manufacturing.

“Right now this is the tip of the iceberg in our industry,” Ralls said. “We want to make sure they have the right level of rigor in their design and product.”

The Navy has been using additive manufacturing for several years, but the use of 3D printed metal parts is a newer concept. The test articles passed functional and environmental testing, which included material, welding, shock, vibration, hydrostatic, and operational steam. They will continue to be evaluated while installed within a low-temperature and low-pressure saturated steam system. The prototype assembly will be removed for analysis and inspection after the test and evaluation period.

The Naval Air Systems Command already is moving toward greater implantation of 3D printed parts. In 2016, it successfully tested a 3D printed titanium engine nacelle link and attachment on a MV-22B Osprey. More recently, it used a 3D printed flip-top valve on a T-45 Goshawk breathing mask. The command said 300 valves were printed within one month, critical to a training program. It estimates some 1,000 parts have been approved for use across the fleet by the end of 2018.

Orringer notes that meeting marine standards required reworking some of the tools for parts fabrication. “Our machines result in close to zero oxygen content,” he said. “Oxidation is a problem, and important when fighting corrosion.”

As the partnership between Newport News Shipbuilding and 3D Systems continues, Ralls and Orringer are looking at a variety of metals and alloys.

“We now use titanium for medical devices,” Orringer said. “But it may not be easy to cast titanium. But if we can 3D print it, maybe we’ll see a greater adoption of titanium in other components of shipbuilding.” More Exclusive Content from ASME.org: The Rise from BattleBot to Corporate Robot Artificial and 3D-Printed Skin Advances for Robots, Humans 3D-Printed Cement Improves Crack Resistance

Shipbuilding has a host of different standards. One of the key challenges was to demonstrate repeatability and quality control while printing a part.Neil Orringer, 3D Systems