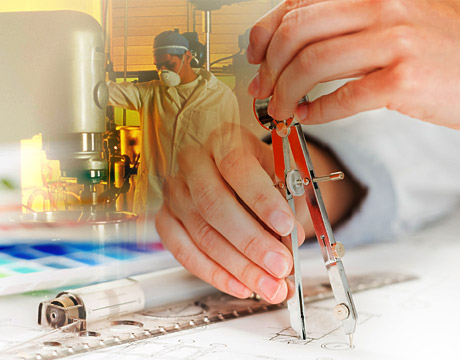 Navigating a Future with Capstone

Universities are often looking for ways to bring the real world into the classroom—and the capstone project has long been a strategy to try and accomplish this. But what oftenhappens is the class stays with the student long after the project ends.

Brian Dvorak’s capstone at Michigan Technological University had him working with a group on testing apparatus related to the airline industry. He found it was a test for himself. “It really helped us realize that the scope of a project is vital,” he says. “Customers came to us with an angle. You learn to scale back to what the customer wanted and make them happy. It also teaches you how to make things happen with a small amount of money. Budgets are tight in the real world. It’s great to be able to think of possibilities but you have to be OK with the reality of what you have to work with.”

It also gave them a strong sense of teamwork. “We had a weekly team meeting and worked collaboratively through the project. We had design studios and had dedicated a cubicle to work in,” says Dvorak, who now is a senior lab operations engineer at Cummins, Inc. “I remember fitting the team in that the area and getting down to it. It can be a struggle to learn to trust other people with certain aspects of a project but you have to. You can’t always do it on your own. The capstone project is all about being collaborative.”

He remembers some in the program didn’t do other internships, making it their first interaction with an industry in which they might work. “That made it an even bigger experience maybe for some of them,” he says.

Now, Dvorak even finds himselfthe sponsor of a project at his alma mater. “I’ve had students come to the plant to show them what I do and what companies do,” he says. “They’re working on a project that’s based on developing a mechanical apparatus to assist with performance testing of engines. There’s a large difference between problem solving in a book and real life problems. Real life has more levers to pull and this can help someone be better prepared when it comes to that.”

Part of a team that created a sailing chair for a physically challenged man who wanted to get back into sailing competition, it’s fair to say this capstone project affected Aleef Mahmud’s life as well.

“My capstone experience was pivotal for setting me toward products and projects I wanted to work on,” Mahmud says. “The capstone project embodied much of what I wanted to do as an individual: create products that help lives and that changes an industry. I’ve continued to work on medical devices with my company Protyo.”

He looks back on it with fond memories in what they pulled off in a few months and thinks it was significant for other team members.

“I remember seeing him out there competing in sailing for the first time in years,” he says. “That’s a feeling I’ll never forget.”

For Further Discussion
Customers came to us with an angle. You learn to scale back to what the customer wanted and make them happy. It also teaches you how to make things happen with a small amount of money.Brian Dvorak, Michigan Technological University