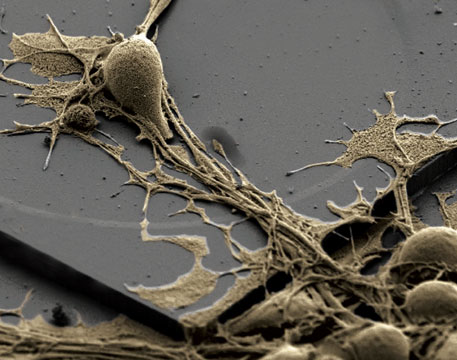 Nanotechnology for the Brain

Go on the Internet today and it issimple to find video of a paraplegic using a brain implant to manipulate a robotic arm, or a chimp using a similar device to control a robot running on a treadmill. There are scans of different regions of the brain lighting up when we see food, a snake, and an attractive person. All this progress makes it easy to believe researchers are close to unlocking the brain’s secrets, and perhaps finding cures to such crippling neurological diseases as Parkinson’s, epilepsy, or schizophrenia.

That would be an incredibly gross oversimplification.

The brain is an astonishingly complex electrochemical machine. It’s composed of tens of billions of neurons, which have thousands of different shapes, sizes, and functions. Of the millions of proteins our bodies manufacture, about 30 percent are found exclusively in the neural system. No one knows what most of them do.

Yet leading scientists and engineers worldwide are convinced that they are on the verge of finding a path through this intricate machinery. In the U.S., the National Institutes of Health is leading the Brain Research through Advancing Innovative Neurotechnologies (BRAIN) Initiative, a public-private program that will spend millions on research. The European Union has also proposed a similar effort that will focus on simulating the entire brain on supercomputers. In both cases, the goal is to understand how individual neurons form networks that give rise to sensing, thinking, and acting.

The BRAIN research will build on two different types of technology. The first is imaging. It includes such techniques as functional magnetic resonance imaging, computer-aided tomography, and electroencephalography. The images formed by these technologies represent the actions of millions of neurons. But their resolution is too low to understand what individual neurons are doing, said Sotiris Masmanidis, a physicist by training and an assistant professor of neurobiology at University of California, Los Angeles.