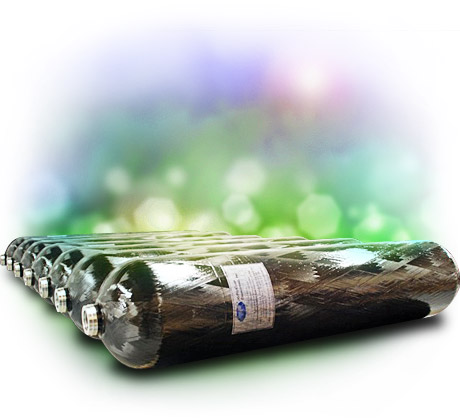 Nanos in the Pressure Vessel

War, global warming, gas prices: such phenomena turn the fuel-craving eye toward more plentiful sources of power, such as natural gas. Indeed, natural gas vehicles, both new and converted, are on the rise. But those who would swap gas guzzling for natural gas guzzling will need to find a new tank. The thin-walled hunks of metal that cart your unleaded won't cut it if they have to store a gas that needs to be compressed.

Several years ago, 3M came up with a proprietary method of loading a thermosetting resin with 40-50% spherical, silica nanoparticles. The resin has the remarkable ability to increase stiffness without becoming brittle. "The reason the toughness goes up is that those particles are very well bonded into the epoxy," says 3M lab manager Gene Portelli, "If a crack tries to propagate through that resin, it has a difficult path to go through." Combined with carbon fibers, it makes for a pretty nice fishing rod. G. Loomis, St. Croix, and several other rod manufactures now produce some of the lightest, strongest, and most responsive rods the world has ever known.

That's a nice claim to fame, but the folks at 3M thought that their resin could do more for the world than just help sportsmen more nimbly yank fish out of water. They started searching for other markets and soon narrowed in on pressure vessels for compressed natural gas (CNG) vehicles. The tank on a CNG vehicle is one of its single most expensive components. If 3M could make a lighter, stronger, and cheaper one, they would have a good chance of capturing a sizable corner of the market.

The fishing rods and other products were made of pre-preg—carbon-fiber tape impregnated with resin—that can be used to produce whatever shape. But pressure vessels are made with a filament-winding process, where carbon fibers are dipped into a resin bath, then wound right into the product, which is then cured in an oven. "The resin between all those carbon fibers can transfer loads across all the carbon fibers more efficiently," says Portelli. The strength of the 3M resin meant the amount of carbon fiber could be reduced, lowering, in turn, the weight and cost of the product.

3M vessels outperformed control vessels in every respect, claims the company. When pressurized to bursting, the 3M vessels proved 6-8% stronger. When put through the same test after first being deliberately damaged, they showed a 30% increase in performance. "When you impact it, the resin can absorb that energy and it creates less damage," says Portelli. "And when there's less damage you get a higher burst strength."During the fatigue test, in which a vessel is repeatedly pressurized and depressurized, the 3M vessels performed 50% better than the control, reaching some 12,000-odd cycles before failure.

The vessels 3M produces are type 4, meaning they're lined with plastic, which is best for keeping things light. The firmhas 25 different sizes they plan to roll out over the next few years. The first will be 21.5 X 60 inches, a size commonly found in the back of pick-up trucks. With no serious competitor on the horizon, it's likely the CNG vehicle of tomorrow will come from 3M.

"All just because we're loading at such a high level with silica," says Portelli. "When you replace epoxy with silica, all those good things start to happen."