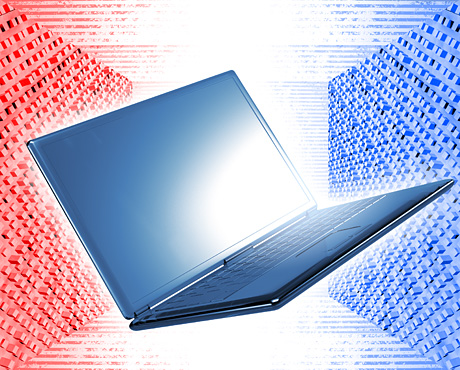 Nanomagnets May Power the Computers of the Future

Silicon-based transistors can't get much smaller than they already are because they have nearly reached their physical size limitations at the nanoscale, which means that the continual improvement in computer speed and efficiency that consumers have come to expect will slow down or stall unless a viable, alternate technology is identified.

One promising candidate is nanomagnetic logic (NML), an exciting new field where transmission and computation of data are accomplished using magnetic fields instead of electrical current.

Instead of using transistors, the standard components in computers today, NML depends on arrays of nanomagnets ranging in size from a few nanometers to a few hundred nanometers to transmit data.

"NML-based circuits process information by manipulating the magnetization states of single-domain nanomagnets coupled to their nearest neighbors through magnetic dipole interactions," says David B. Carlton, professor of electrical engineering and computer science at University of California-Berkeley. "The state variable is magnetization direction and computations can take place without passing an electric current. This makes them extremely attractive as a replacement for conventional transistor-based computing architectures for certain ultra-low power applications."

These different magnetization states can be used to represent binary ones and zeros, the fundamentals of computer-based arithmetic, and the interactions between the nanoscale magnets are then used to process information.

"Lithographically defined magnets can process and move information in a cellular, locally interconnected architecture," says Gary Bernstein, a professor of electrical engineering at University of Notre Dame. "Wires, gates, and inverters have been demonstrated at room temperature and it is estimated that if 10 to the tenth power magnets switch 10 to the eight times per second, the magnets themselves will dissipate only about 0.1 W of power."

A crucial challenge for this technology, notes Carlton, is a viable clocking ?eld. "Field clocking with buried wires may be competitive with CMOS and useful for experimental studies, but the adaptation of a novel computing architecture probably requires at least an order of magnitude improvement for it to be worth the cost," says Carlton. "An ef?cient clock using magnetoelectric clocking would allow nanomagnetic logic to operate closer to the fundamental limits of computing. However, magnetoelectric clocking is not yet a mature technology."

Other key NML characteristics compared to standard semiconductor technology include:

"One application for nanomagnets is in microcontrollers, like those used for low-power, real-time control systems," says Bernstein. "Those based on NML will ultimately be very low power, be radiation hard (ideal for space missions or nuclear reactors), operate at reasonably high temperatures, and when switched off will still retain their state. These are also ideal properties for robotic systems."

Recent advances include the development of layers of magnetic nanoparticles (much smaller than nanomagnets) that increase the field strength near the magnets to lower the overall system power, as well as a simple, field-coupled input for logic gates based on nanowires.

Continued NML research will hopefully lead to the development and commercialization of an all-magnetic information processing system.

"Ultimately, operating at lower power will be a very big deal since computers consume enormous amounts of power worldwide," says Bernstein. "Nanomagnets can also be scaled to very small sizes and can be stacked in a three-dimensional configuration, so Moore's Law scaling may continue in a post-CMOS technology."

This makes them [nanomagnets] extremely attractive as a replacement for conventional transistor-based computing architectures for certain ultra-low power applications.Prof. David B. Carlton, University of California-Berkeley