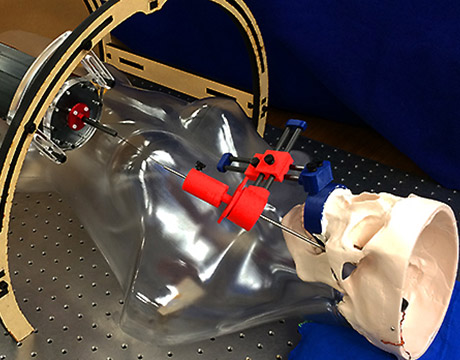 A team of engineers is looking for a way to treat epilepsy by entering the brain through the cheek. Image: Vanderbilt University

Epilepsy affects one in 100 people globally and is most commonly treated with anti-seizure medicine or invasive surgery. Eric Barth, an associate professor of mechanical engineering at Vanderbilt University, would like to change that.

“Those drugs have the possibility of being debilitating mentally,” he says. 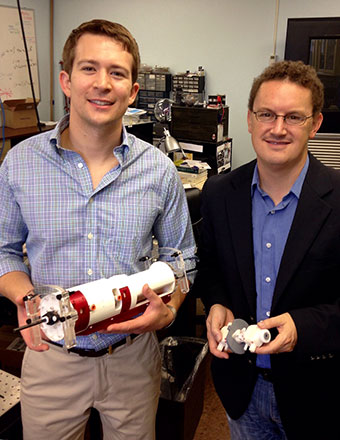 The surgery to treat the condition also has its own risks. Beginning at the base of the skull, neurosurgeons probe through nerves until they reach the hippocampus.

“For about 70 percent of seizures, it comes from neural instability, so when you treat epilepsy surgically, they remove the hippocampus part of the brain,” Barth says. “You figure out whether it’s the right or left part [causing the seizures] and it’s an invasive surgery where you drill a hole in the side of the skull. Recovery time alone with this surgery can be a couple months. We wanted to find a way to avoid it.”

The solution Barth’s team came up with was to go through the patient’s cheek, using a robot-assisted surgical procedure.

For You: This Year’s Top 5 Innovative Medical Technologies

Once inside the patient’s cheek, their procedure involves locating a structure called the foramen ovale and “sneaking up” to the brain with a steerable needle under MRI guidance, he says.

“We want to see where the needle is going under the image and guide that needle to the middle of the hippocampus. Then you heat the end of the needle up,” he says. “That way, instead if removing the hippocampus, you try to treat the patient through heating.”

The procedure is guided by MRI, so the team needed to design a robot that was MRI compatible.

Likewise, to have a robot inside the scanner with you, that robot can’t be made out of metals and motors and certain sensors. Because of this, we made our robot all out of plastic. Prof. Eric Barth, Vanderbilt University

“For MRI, they ask you to remove everything that’s metal because the magnetic fields are huge and you can’t have anything metallic in there because it can obscure the image,” he says. “Likewise, to have a robot inside the scanner with you, that robot can’t be made out of metals and motors and certain sensors. Because of this, we made our robot all out of plastic and it uses these inflatable bellows where you control it with air. You use this robot to steer the needle into the hippocampus and go to the back end of it as they steer. Then you can see everything on the scanner.”

The robot is shaped like two toilet paper roll-sized objects. One rotates a needle helically—a corkscrew-style way in—and the second needle is in back.

The researchers have verified that the robot doesn’t interfere with the scanner and that there’s accurate placement with the needle, he says. In addition, Will Grissom, assistant professor in biomedical engineering at Vanderbilt, has developed techniques in scanning protocols in order to image the needle with the MRI.

“We see the needle as it comes in and, as you retract the needle, you stick something out of the end of it called the ablater, and you use laser energy and heat up that tissue,” Grissom says. “Surgery as it’s done now can lead to patients possibly having to learn to talk again. We really hope our way can give them an easier option.”