Moon Base Unfolds a New Frontier

Moon Base Unfolds a New Frontier 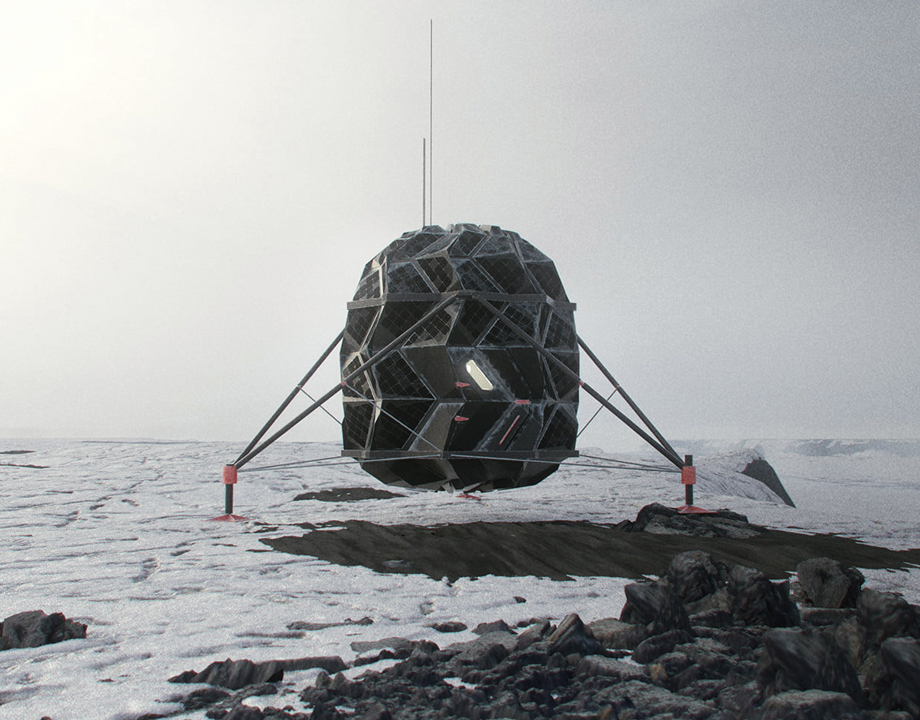 An artist’s conception of the LUNARK habitat, after it has unfolded from its compressed origami configuration. Image: SAGA Space Architects.

Aerospace Building Construction Building Equipment Contractors Electric Power Engineering Services Oil and Gas Extraction Transportation and Aerospace Manufacturing
There’s more to life than just surviving, Danish architect Karl-Johan Sørensen asserts. That’s true both on Earth and in a more hostile environment, such as the lunar surface. To meet those needs, Sørensen and his colleagues at SAGA Space Architects have created LUNARK, a portable lunar habitat designed to function as both an integral part of the landscape and a place for humans to thrive, trained astronauts or not.

It’s hardly the first attempt to design a living space for another world, of course, but SAGA’s concept features some new wrinkles—or more accurately, folds. Rather than a completed, rigid structure, LUNARK will make the journey to the Moon as a compact structure nestled snugly inside a cargo rocket, intricately folded up using 400-year-old origami principles. Once on site, its three-legged, mostly-aluminum framework and carbon fiber composite panels will unfold into place, ready for the intrepid lunar explorers to move in. 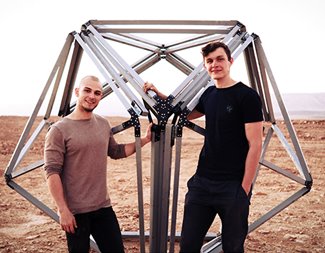 SAGA founders Karl-Johan Sørensen and Sebastian Aristotelis with the framework for their LUNARK pop-up lunar habitat. Image: SAGA Space Architects.
“With the Moon, the primary challenge is transportability and size constraints,” Sørensen said. “Because rockets are expensive, the more compact and light you can make it, the more economical, and the more you get out of your mission.”

He notes that from its beginnings, human spaceflight has involved static constructions that are sent into space either as one big piece or several pieces joined together later, as with the International Space Station. But a collapsible design takes up far less precious space and weight within a launch vehicle.

Editor's Pick: Going Back to the Moon

Such a design could be an inflatable structure, an approach already explored by companies such as Bigelow Aerospace. But that has significant disadvantages, Sørensen explained. “One of those is that solar panels—and everything else that’s flat and has to be mounted on top of it—do not really interface that well with a flexible membrane.”

That led to the LUNARK idea: “We thought of origami, partly from looking at flowers and leaves. Nature is often a good starting point to solve problems. A flower unfolds and it’s folded up in origami style. It seems like a pretty elegant solution.” 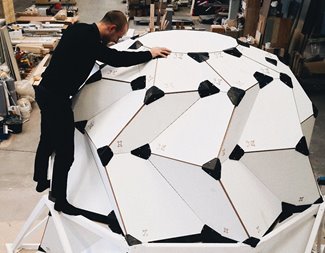 Engineers at SAGA put the finishing touches on the LUNARK configuration that the company’s two founders will inhabit for three months in Greenland. Image: SAGA Space Architects.
Elegant, perhaps, but not easy. Origami concepts have been used in space before to deploy solar panels and light sails, but the SAGA concept introduces new levels of complexity. Even NASA physicist Robert Lang, a recognized expert in designing practical origami structures, was dubious.

“He said that it’s not possible,” recalls Sørensen. “But we thought it might be possible if you allow for some deformation in the structure, and that’s what we’ve achieved. We’ve made it completely closed. And then it has these flexible seams that just allow it to deform enough for it to fall down and collapse.

More for You: John Thornton: Making the Moon Accessible

“The deformation is actually working to our advantage because it’s a little bit like a spring that has a biased stability. It’s stable and then you start pushing it up and there’s some resistance on the shape, and then as soon as it reaches a threshold, it pops up and completes the process. Then when you want to collapse it again, you push the shape until it reaches a threshold and then it folds.”

More than having a workable origami design, the structure also has to be practical for a hostile environment. So Sørensen and SAGA co-founder Sebastian Aristotelis plan to test LUNARK in one of the harshest places on this planet by spending three months living and working in a prototype habitat in the wilds of northern Greenland. 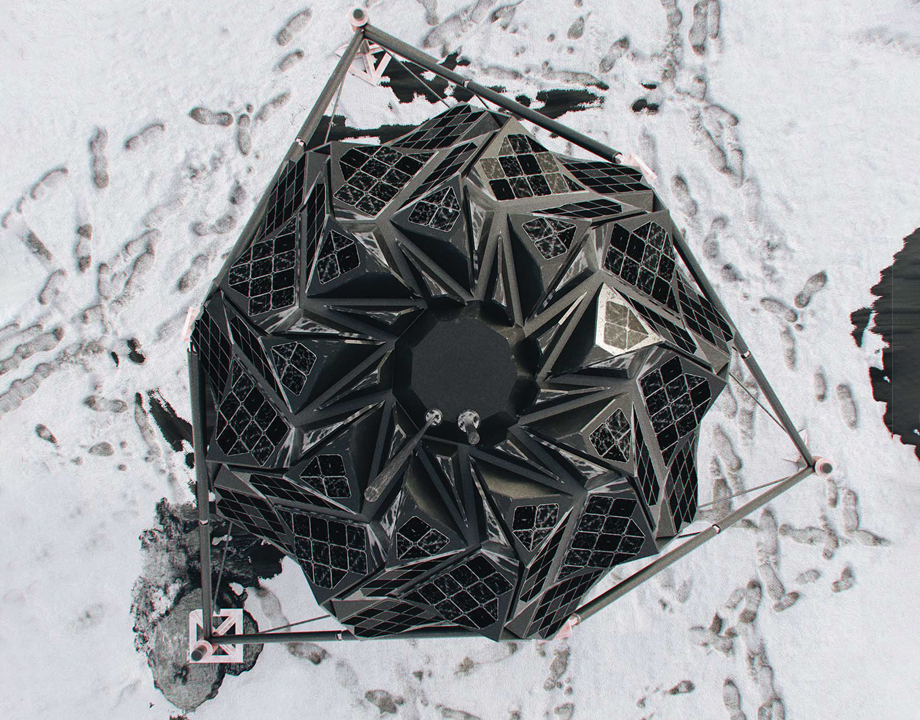 Although it will have two levels, LUNARK will still be a tight fit for astronauts. Image: SAGA Space Architects.
“We believe that only through putting our own bodies and our minds into the situation can we really extract firsthand the knowledge of the place that we need, because it’s so hard to experience these kinds of things vicariously,” Sørensen said. “We need to be there and feel the danger as well as the isolation.”

Greenland is not a perfect analog to the Moon—the Moon lacks wind and polar bears—but its extreme environment will provide an ideal proving ground for the habitat’s viability.

“The habitat is designed to withstand the harsh and cold arctic environment,” LUNARK mechanical engineer Frederik Voldbirk explained. “Temperatures of -30°C and wind speeds of 32 meters per second makes heavy insulation and a strong structural frame a highly critical part of the design.”

Reader's Choice: How Engineers Put Astronauts on the Moon

The timing of the Greenland expedition will also simulate the conditions at LUNARK’s intended lunar destination, the Peak of Eternal Light at the Moon’s South Pole, where the sun does not set. Greenland’s arctic days average more than 20 hours of sunlight, enabling its solar cells, which cover the outer shell, to generate electricity for all its energy needs, Voldbirk said.

Inside, the bi-level habitat is designed for maximum efficiency and sustainability, including a 3D printer for spare parts. In Greenland, fresh water is readily obtainable from ice, but food is a different problem. Along with the time-honored astronaut staple of powdered food, Sørensen and Aristotelis’ diet will be supplemented by an algae bioreactor and a vertical farm. To counter the psychological effects of isolation and monotony, a circadian system will subtly alter the color and luminosity of the interior over the course of a day, even simulating weather to create a dark, stormy days or brilliant sunshine.

The SAGA team is confident that the lessons learned in Greenland can be readily translated and extended to a lunar habitat. “All the design choices inside the capsule—colors, materials, spatial configuration—can also be applied to lunar habitat design,” Voldbirk said. “The dynamic circadian light system could be immediately applied to lunar habitats to simulate a natural earthly daily rhythm as well as the slow seasonal changes of sky light.”

Sørensen wants to see where the upcoming mission will take him: “Ideally, we would start to work on a refined habitat that is more space-ready than the one we have now. That would definitely be the goal, to take what we have now and what worked and then work with engineers to validate it for testing in space.”

The SAGA approach, he admits, is still a new and unproven philosophy for space exploration.

“There’s no such thing as space architecture yet,” Sørensen said. “It’s kind of a niche in architecture that we’re trying to define.”

Still, if all goes well, he hopes the Greenland LUNARK expedition will silence the skeptics: “We still haven’t done it for long enough that anyone really believes that we’re serious,” he said. “We haven’t constructed anything that’s gone to space. So everything we’re doing is trying to get the attention of the bigger guys. We’re hoping that this mission will serve as a proof of concept and a proof of us as a design and engineering firm that can actually build something like this.”

Mark Wolverton is a science writer based in Philadelphia.