Modular Floating Bridge to the Rescue

Modular Floating Bridge to the Rescue 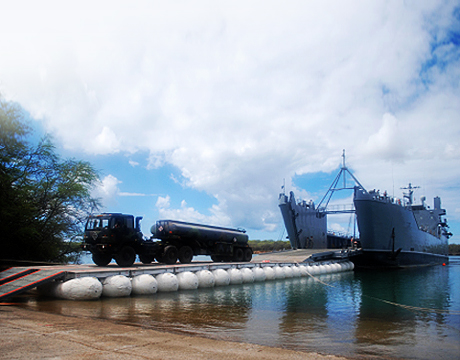 About a decade ago, the U.S. Army was disappointed that its existing causeway systems (floating bridges) did not meet its requirements for rapid deployment. The bridges were too heavy, required deep-draft vessels with high-load capacity cranes to transport and unload them, and took too long to deploy.

The unique design allows military personnel to deploy the LMCS without a shore-based staging facility. This makes the LMCSadaptable and flexible for applications in challenging physical settings, such as post-disaster areas following earthquakes or severe storms, where ports have been damaged or destroyed.

“Compliance of the structural system allows greater deflection under the load, consequently resulting in greater buoyancy forces directly under the vehicles traversing the causeway,”indicates Joseph Padula, a research civil engineer with the ERDC. “The compliance also allows for greater survivability of the causeway system when in the presence of large waves.”

Each 40-foot section is composed of four modules and weighs approximately 6,500 pounds. Seven personnel can deploy 120 feet of the system in approximately three hours. Each module is 10 feet long by 20 feet wide and is supported by two 5-foot-diameter pneumatic floats. The internal pressure in the pneumatic tubes can be adjusted for easier penetration onto shallow, sandy beaches to conform to the bottom slope. The causeway is strong enough to support in excess of 70 tons (Military Load Class 70, main battle tank traffic).

“Another challenge was designing the emplacement and recovery (E&R) device,” adds Padula. “It was designed to fit an Army Logistics Support Vessel (LSV), which can be used as the demonstration platform and for transporting and emplacing the LMCS. This system allows the LMCS to emerge from the LSV fully assembled, with floatation elements inflated.It incorporated material handling aspects, mechanical assembly of modules, and inflation of floatation in a semi-automated system that minimized manpower requirements and the time necessary to emplace and recover the LMCS.”

Originally conceived as a vessel-to-shore bridging solution for a particular class of military watercraft, the LMCS has since been demonstrated to have viable wet-gap crossing capability for both military and emergency relief operations.“It is also being considered as a possible solution for mud flat crossings and has been suggested for potential use as a temporary work platform in both swampy environments and open water,” says Padula.

The Engineer Research & Development Center expects the LMCS to be especially valuable for humanitarian assistance and disaster-relief operations in areas damaged by severe weather events. It can also provideexpedient egress routes for evacuations and rapid interim replacements for bridges damaged by storms or terrorist actions (no similar capability currently exists to meet these needs).

For Further Discussion
The compliance also allows for greater survivability of the causeway system when in the presence of large waves.Joseph Padula, research civil engineer, ERDC