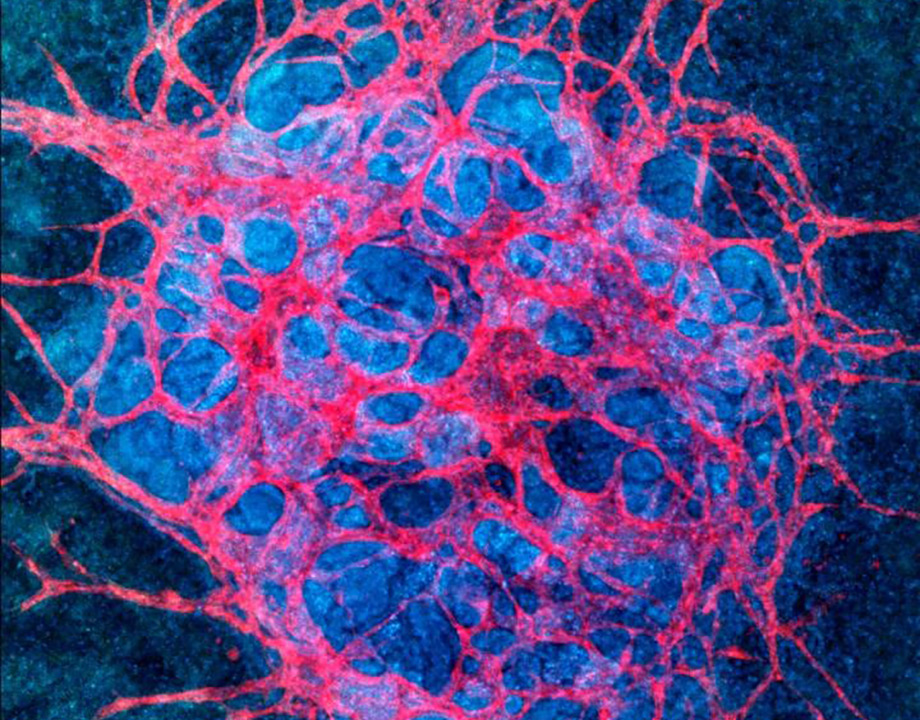 Mini Kidney on a 3D-Printed Chip

Using a novel biomechanical approach, a team of researchers at Harvard University’s School of Engineering and Applied Sciences and Harvard Medical School have grown miniature kidney organoids on a chip. Compared with lab-grown kidney tissues, the organoids displayed a system of blood vessels that enables the tiny organoids to perform many of the functions of working kidneys.

In the body, kidneys perform multiple functions such as cleaning blood, filtering nutrients, and making urine. Each human kidney contains about a million functional units called nephrons, which regulate the concentration of water and soluble substances such as salts, reabsorb nutrients and excrete the rest.

Each nephron consists of a glomerulus and an attached tubule. Together, they filter and clean the bloodstream. 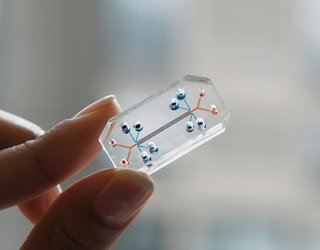 Specially designed microfluidic chips use fluid flow to provide the mechanical clues kidney tissue needs to growth more mature vascular networks. Credit: Wyss Institute at Harvard University
The glomerulus acts as the gatekeeper, channeling blood components, such as red and white cells, back into the bloodstream while directing everything else into the tubule. Inside the tubule, specialized cells sift through the flow, pulling out amino acids, glucose, and other nutrients to return to the bloodstream while channeling toxins, infectious agents, and other harmful substances into the urine.

These functions rely on kidneys’ robust network of blood vessels, through which the exchange of nutrients and waste products takes place, explained Kimberly Homan, research associate at the Harvard’s School of Engineering and Materials Sciences.

In recent years, several laboratories have managed to grow kidney cells in culture dishes. The resulting tissues, however, lacked the functional vasculature needed to clean and filter blood products. When researchers tried to stimulate blood vessel growth with biochemical cues and growth factors, they failed.

“The study advances kidney research by helping us better understand the effect of liquid flow during organ development.” Benjamin Freedman, University of Washington

Instead of this traditional approach, the Harvard group worked with fluidic shear stresses—the force generated by fluid flowing over the organoids—that mimicked the natural conditions in which kidney tissues develop in the human body.

The researchers first grew the organoids from stem cells and then placed them in a 3D-printed chip containing an extracellular matrix, a supporting scaffold with mechanical properties similar to natural cellular matrix.

Then the team flowed a nutrient-rich fluid over the developing organoids for 10 days. The force generated by the flowing liquid provided the necessary physiological cue the organoids needed to start growing vasculature.

Read more on Biomechanics: How to Make a More Precise Hypodermic Needle

The resulting organoids displayed more mature kidney blood vessels structure than those grown in static culture. In fact, the team observed a tenfold increase in vessel length and junction density (the amount of blood vessel branching per unit area). 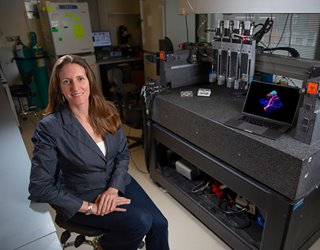 Kimberly Homan 3D prints stem cell-derived tissues to create kidney tissues that mimic native kidneys. Such organoids could be used to test medications and model diseases. Image: Wyss Institute at Harvard University
The structure of the perfused organoids also differed from those grown statically. In real kidneys, cells inside tubules develop specific organelles called cilia and microvilli, tiny hair-like structures that pluck nutrients from the body fluids and send them back into the bloodstream. These cells also orient themselves in a “polarized” way—they line up in a specific fashion to redirect nutrients into the blood. The static tissue cultures never achieve this level of maturity, but organoids grown under fluid flow.

“We are getting kidney tissue that is maturing to a level that we have not encountered before with organoids grown in static culture,” Homan said. “The cells have a better expression of essential transporters needed for biological kidney function.”

The team sees several possible applications for this work.

Growing artificial kidneys may take years. A more likely near-term application could involve using lab-grown kidney tissue in drug testing, which would enable researchers to use human kidney models while reducing the use of animal test subjects.

Meanwhile, the fluidic flow technique promises to advance kidney research. As Morizane noted, “We can observe urinary production in the culture plate and see how native kidney works.”

“Growing functional tissue in the lab is a major challenge that has not yet been met,” Benjamin Freedman said. He is an assistant professor of medicine and nephrology at the Institute for Stem Cell and Regenerative Medicine at the University of Washington and was not involved in the study.

“The study advances kidney research by helping us better understand the effect of liquid flow during organ development,” he said. “In particular, it is interesting that fluid flow stimulates the growth of endothelial cells—blood vessel cells—inside the kidney structures. The blood vessels are an important component of kidney tissue, and right now we don't have ways of accurately re-creating that architecture.”

Freedman also pointed out that the Harvard team derived kidney cells from stem cells, which is less invasive than harvesting kidney cells from patients. Doctors can use patients’ own cells to grow kidney structures to better diagnose their nephrology problems.

“In theory, we may be able to use this type of approach to diagnose aspects of a patient's kidney health using these types of devices as a surrogate for their kidneys,” he said.

Freedman also thinks that the study’s approach advances the field of medicine even beyond nephrology and may be applicable for many types of organs.

“By merging blood vessel structures with organoid structures, we may in the future be able to generate functional tissue grafts outside of the body,” he said.